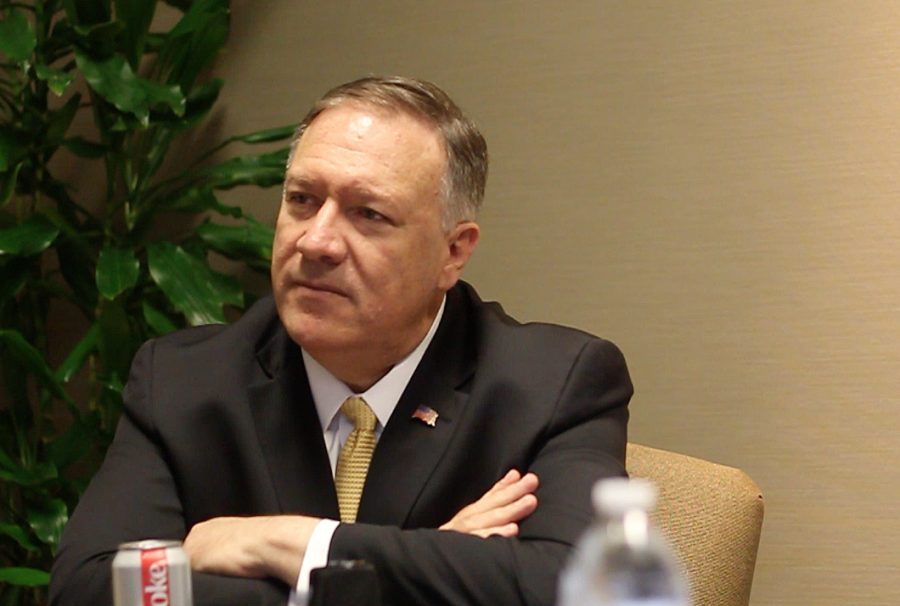 Secretary of State Mike Pompeo sits down for an interview with The Sunflower on Friday as part of his visit to Wichita State University for a roundtable on business. The former U.S. Representative for Kansas' 4th District visited Kansas with Ivanka Trump this week, touring WSU Tech and Textron Aviation East.

In a sit-down interview with The Sunflower Friday, Secretary of State Mike Pompeo maintained that he is in “full accord” with acting ambassador Bill Taylor on Ukrainian policy.

Asked to comment on his confidence in the top U.S. diplomat in Ukraine, Pompeo circled the question before indicating that he believes Taylor is still capable of fulfilling his duties, even as President Donald Trump has disparaged him publicly.

“I have every reason to think that he’s still out there, banging away at that problem set,” Pompeo said. “But I will say this: we all, as human beings, can get it wrong, too.”

In an explosive, closed-door testimony Tuesday, Taylor, who has served in every administration of both parties since 1985, told House committee members that the White House threatened to withhold more than $400 million in much-needed military aid to Ukraine unless newly elected president Volodymyr Zelensky launched investigations into the Bidens that would benefit Trump politically.

After Taylor’s testimony, the White House released a statement chiding “radical unelected bureaucrats” for participating in a “coordinated smear campaign” and “waging war on the Constitution.”

Pompeo personally appointed Taylor to his position when ambassador to Ukraine Marie Yovanovitch was recalled after becoming a political target.

“I’ve watched Bill [Taylor] — he and I have talked about Ukrainian policy at some length,” Pompeo said. “How do you take down corruption? How do you now help the new leader there, President Zelensky? How do we deliver on America’s national security interests?

On Friday, Trump again lashed out at Taylor, calling him a Never Trumper. When a CNN reporter pointed out that Pompeo hired the diplomat, Trump was dismissive.

“Hey, everybody makes mistakes,” he said.

In his interview, Pompeo, too, broached the subject of human error.

“I don’t think by nature of the fact that I work at the State Department means I get everything right every day,” he said.

“We all have a responsibility to make sure we’re getting it as right as we can each and every day.”

For his part, Trump has maintained an account of “perfect” dealings with Ukraine.