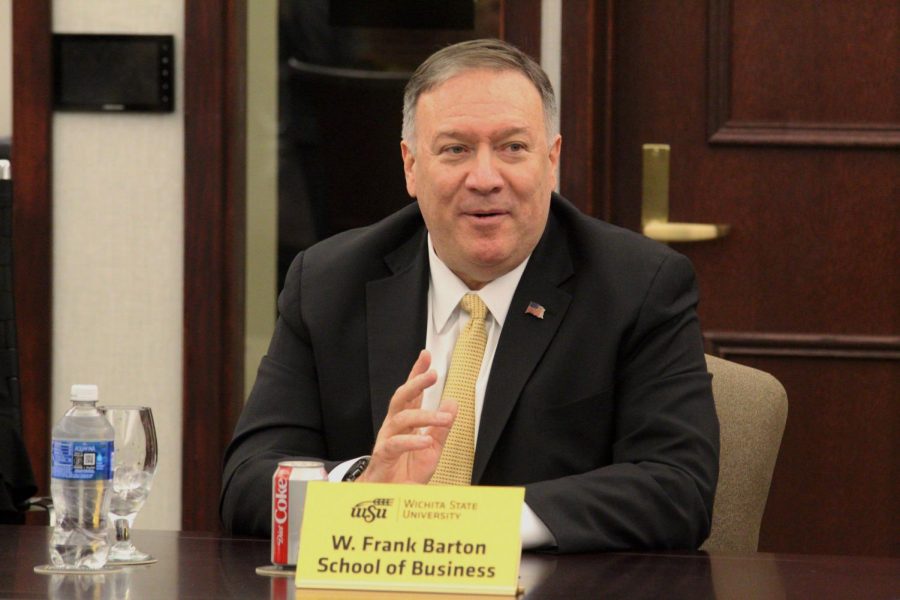 Secretary of State Mike Pompeo, who got his start as an entrepreneur in Wichita, speaks on Friday to primarily business students during a roundtable at the Woodman Alumni Center. He visited Wichita State as part of he and Ivanka Trump's visit to Kansas this week.

Secretary of State Mike Pompeo held a roundtable Friday with students at Wichita State University, where he answered student questions, mainly focusing on the State Department and the “noise” in his life.

The secretary was on campus Friday, where he encouraged students to consider careers in public policy post-graduation.

Pompeo represented Kansas’s fourth district, which includes Wichita, before being tapped as CIA Director early on in the Trump administration. He later replaced Rex Tillerson as Secretary of State.

“If you pick up the New York Times or the Wall Street Journal today you see a lot of noise,” Pompeo said in his introduction to students.

In response to a student question about how he blocks off the “noise” and focuses on his family, Pompeo brought up that he was in town for a wedding this weekend.

“Despite what the Wichita Eagle wrote yesterday . . . we came here for a wedding,” Pompeo said. Jonathan Shorman tweeted in response that Pompeo did mention he was in town for a wedding, but told him, “I came here today to talk about workforce development.”

Pompeo was in town Thursday with Ivanka Trump, touring WSU Tech’s National Center for Aviation Training and Textron Aviation as part of a signing of a “Pledge to America’s Workers.”

“I don’t say that I don’t read it,” Pompeo said. “I’ve got a public affairs team that says, ‘Look what they just wrote about you.’ Noise, noise. If you know who you are, if you know what you’re trying to get to and you do so with integrity, as best you can deliver every day, you keep doing it. Put your helmet on and get back on.”

In response to a student question on what specific quality they look for in an employee at the State Department, Pompeo said he doesn’t look for a single quality, but integrity is at the top of the list.

“If I ask you a question, and I’m going to get a response that is truthful and complete . . . a perfectly reasonable response — I give that response all day long. There’s no capacity to develop that trust you need to have him be a part of your team, so it is a near zero-tolerance standard we basically set.”

Later on, a student asked the secretary how he deals with false information. While he focused mainly on state-sponsored propaganda in other countries, he did go on to say that some of that propaganda is distributed by “traditional media outlets.”

“That’s a fantastic question.” Pompeo began. “Some of that false information is wrong — some of it is intentionally wrong. I can talk for hours about this.

Pompeo then told students to read “widely” and to “be grounded in the things they know to be true.”