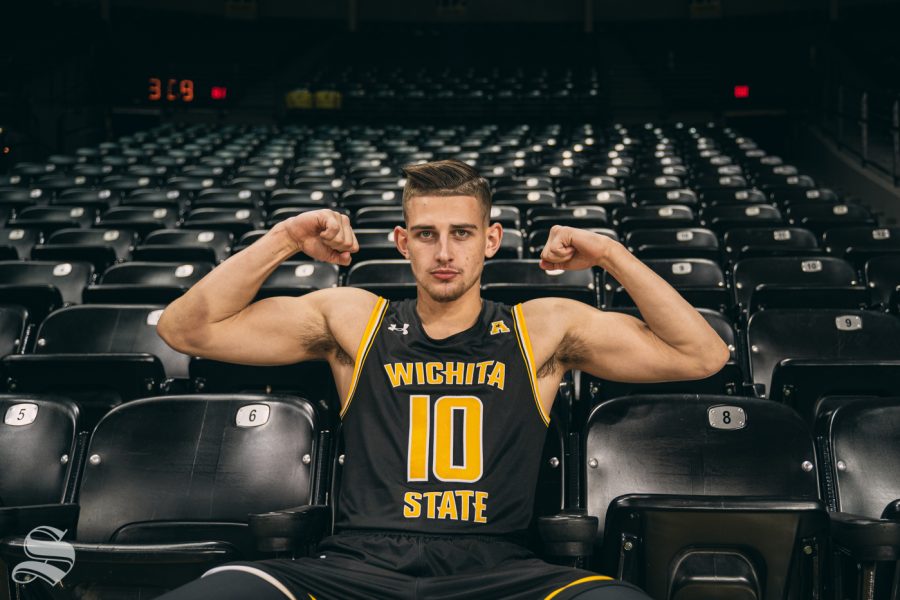 Erik Stevenson poses for a photo at media day on Oct. 15 inside Charles Koch Arena.

A new basketball season is approaching. Not only has there been hard work during the offseason to improve the team as a whole, but individual players have been honing their personal games.

“I think that two guys that stand out to me, in that regard, are Erik Stevenson and Jamarius Burton — both of whom have become better athletes,” Head Coach Greg Marshall said during a press conference. “They’ve cut their bodies up. They’re a little quicker, more explosive, but they haven’t lost any strength.

“They’ve slimmed down from what they were last year, so in Erik’s case, he’s able to guard better, which was a struggle last year.”

Stevenson said slimming down was a huge part of his summer.

“I dropped 15 pounds. That made me quicker . . . lighter on my feet, more athletic,” Stevenson said. “Those things in itself make the game a whole lot easier.”

Stevenson said losing that weight was exactly what needed to to happen to improve his game.

“When I first got here, I put on 20 pounds, and that didn’t feel right . . . It made last year pretty tough,” Stevenson said. “Losing that weight — getting back to a comfortable playing weight — changed everything.”

Outside of the gym, sophomore Jamarius Burton said he’s spent a great deal of time mentally preparing himself for this season.

“I built chemistry with my teammates,” Burton said. “Just tried to get a better understanding of the offense and where I could be more successful with the team.”

Burton has worked especially hard improving his shot, which he believes he has succeeded with.

“I’ve changed my mechanics. I feel like I’m more confident in my shot,” Burton said. “I mean, we’ll just have to see.”

Stevenson has also seen his hard work over the summer pay off. During the off-season, he added six inches to his vertical jump.

Stevenson said he didn’t realize he had made such an improvement until they did their testing. He said he attributes it to strengthening his legs and focusing on cardio.

Stevenson said the team as a whole has improved from last season, when they were ultimately ousted in the semifinals of the NIT.

“I think this team is definitely better than last year’s,” Stevenson said.

Stevenson said experience will pay off this year as veterans help newcomers get acclimated.

“This year, we got guys who can help the new guys out,” Stevenson said. “They help us get better, we help them get better. They’re just willing to learn and listen. I think that’s really what propelled us this summer.”

“If your confident, it doesn’t matter what you’re doing,” Burton said. “If you’re confident in it, if you believe you can do it, you can do it.”

Marshall said he has high hopes for both Burton and Stephenson as they enter the new season — particularly with regard to converting near the basket.

“These guys will hopefully be able to finish better around the basket,” Marshall said.