High-flying under the radar: Dexter Dennis’s unique rise to the top 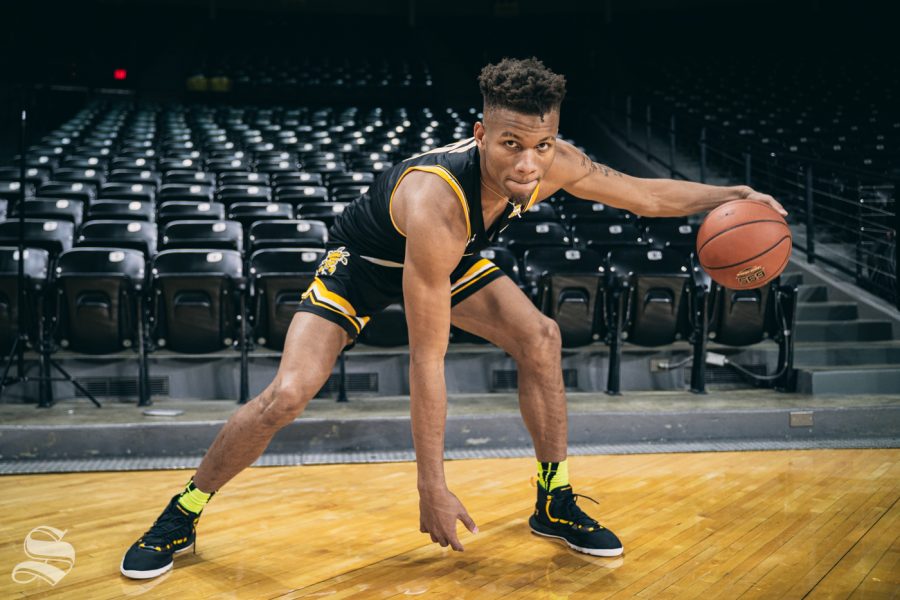 Dexter Dennis poses for a photo during media day on Oct. 15 inside Charles Koch Arena.

For the entirety of his life, Dexter Dennis has been flying under the radar. After high school, Dennis still didn’t have the offers he was looking for. Instead of going straight to college after graduation, he decided to take a post-graduate year at Believe Prep Academy in Tennessee.

And Dennis did keep believing. It was at Believe Prep that he met a man by the name of Tyson Waterman, who knew what it took to play basketball at the collegiate level. Dennis became a budding star at the academy. His athletic ability was jaw dropping to coaching staffs in the league, and his potential was apparent.

Yet no school was taking a chance on the high flyer from Baker, Louisiana. But Waterman had a connection: Gregg Marshall.

Waterman got Marshall to fly down and watch Dennis for an open gym session during the prep season. Marshall was in need of talented recruits after losing six players to graduation, one to academics, and another to transfer. Dennis got the news from his head coach two days before Marshall flew down..

“Coach Tyson told me that Coach Marshall was going to fly down here and watch me play in open gym,” Dennis said. “We play in open gym or whatever, and then bam, he throws me a scholarship.”

Dennis had earned the opportunity he’d always wanted. He had the Division-I offer he felt like he deserved. No more than two weeks later, after processing it all, Dennis announced his commitment to Wichita State.

“A couple of days after that open gym, I’m just thinking about all of the pros of this situation,” Dennis said. “You know, Coach Marshall is a hall-of-fame coach, and the playing time is available, so for me, that was all I needed. It took between a week and two weeks for me to commit.”

Dennis added, chuckling, “I think he (Marshall) was just as excited as me because, well, it might’ve been a little weird. Honestly, it probably was a little weird for him.”

The unique part about Dennis’ recruitment was that the now-sophomore didn’t even take a campus visit to WSU before making his commitment. The first time he stepped foot in Kansas was the summer of 2018, when all enrolled freshmen joined the team for training camp.

“If you’ve ever heard of prep schools and JUCOs, they’re in the middle of nowhere, so location really didn’t matter to me,” Dennis said, “And once I saw the fan support and the players in the league (NBA), I was just like, ‘Man, I don’t really think I need to take a visit.’”

So far, Dennis has made the most out of the opportunity Marshall gave him. Last season, Dennis finished as the team’s fourth leading scorer, averaging 8.4 points per game on 39% shooting. He also led the team from behind the arc, shooting 40%.

Dennis had plenty of breakout moments throughout the course of last season. From an array of thundering dunks, a buzzer-beater against Tulane, and multiple near double-doubles, Dennis consistently provided for the Shockers on both ends of the floor.

But his most notable performance came in the most important game of the year. Dennis exploded for 14 of his 17 points in the second half of the NIT game against the No. 1-seeded Indiana Hoosiers in Bloomington. The victory sent the Shockers to the semifinals in Madison Square Garden.

Dennis also recorded six blocks and four rebounds in the game, while knocking down five three-pointers.

Dennis knows his potential, and he’s quietly continued working in the offseason.

“I’m just trying to become a better dribbler and passer,” Dennis said. “Like everything has been off of the bounce. That’s what my workouts have been based on. It’s so I can create my own shot and help my teammates get a shot, too.”

This season, Dennis is all about changing his game for the good of the team, he said. That and proving doubters wrong.

“I’m more than just a dunker, or someone who can catch and shoot,” Dennis said. “I’ve really worked on evolving my game to provide more opportunities for everyone, and myself. I’m an all-around player, and I’m just doing what I think it will take for this team to be successful.”