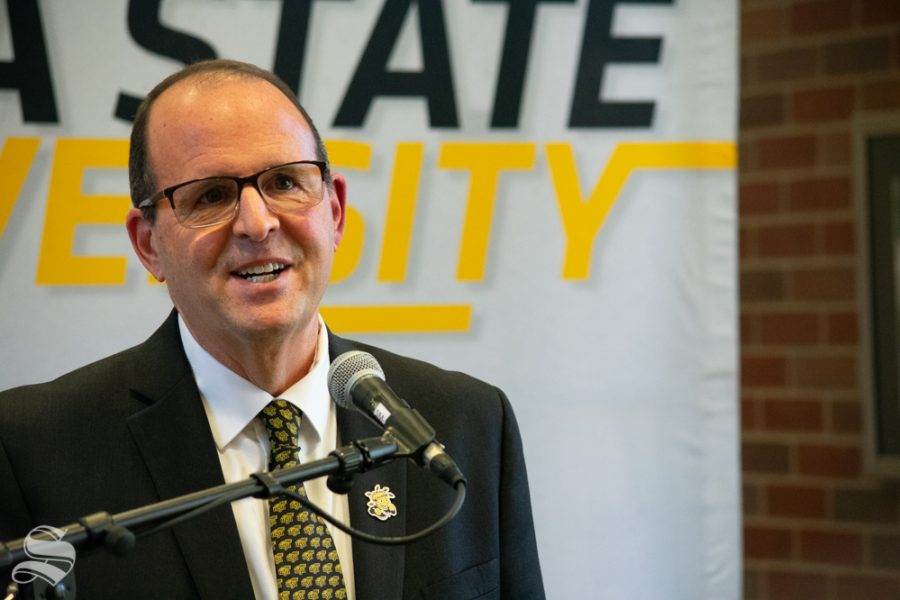 Wichita State's new President Jay Golden speaks at a press conference on Thursday. Golden, formerly a vice chancellor at East Carolina University, was selected by the Kansas Board of Regents in a closed search process.

The wait is over.

After a months-long closed search process, the Kansas Board of Regents on Thursday selected Jay Golden, 55, to be the 14th president of Wichita State University. Golden most recently served as a vice chancellor at East Carolina University.

In his first address to the university, he said some of his main goals are to cap tuition rates, increase enrollment and further the university’s commitment to applied learning.

“We need to prepare students for the future — not just for the jobs of today — but for the professions of tomorrow,” Golden said, stressing the inclusion of arts, humanities and social sciences in that vision.

“What’s going to be our secret sauce? … It will be the legacy of late President John Bardo and the continuation of our focus on applied learning,” he said. “Higher education is at a crossroads … We need to adapt; we need to be nimble. And that’s what inspired me to come to Wichita State.”

Golden will take over as president in January, when he will move to Wichita with his wife, Dina Golden.
Not a ‘change agent’
WSU and KBOR began searching for a new university president this spring, following the death of late President John Bardo in March. Bardo was selected as president in 2012, and was perhaps most known for leading the development of Innovation Campus.

Last month, KBOR said its main criterion for the new president was a dedication to fulfilling Bardo’s vision for WSU.

“Obviously, someone who can take the programs that Wichita State, the innovative things that you’ve done there in regards to Innovation Campus and connection with industry, internships — those kinds of things that are so exciting to WSU — and really fully implement them,” KBOR Chair Shane Bangerter told The Sunflower.

“Fully implement that vision that Dr. Bardo had to really help grow the Wichita economy and the state economy and provide the labor that we need.”

Golden acknowledged at a press conference on Thursday that, while he has his own ideas about improving WSU, he wants to stick to the plan laid out before his arrival.

“I think we have a great foundation and a great platform. I’m not coming in here as a change agent,” Golden said.

Golden said he was excited by the facilities that Wichita State has on its Innovation Campus and the school’s unique partnerships with regional industry leaders.

“Wichita and WSU are the epicenter of aerospace and aerospace research,” Golden said. “We need to protect and grow this critical sector for our economy, and bring additional value through new modes of mobility and logistics — including autonomous transportation.”

A career researcher and engineer, Golden was raised in Los Angeles. Golden began his work at ECU in 2017, working beforehand at Duke University as associate vice provost for research and director of corporate relations. He holds a doctorate in engineering from Cambridge.

Golden said Thursday that he had visited Wichita a couple times before applying to be president.

“[Wichita] feels like home,” he said. “It’s a big city with all the amenities that you would want in a big city, but without … the claustrophobic feeling I get in certain cities.”

Since the process was closed, candidates were not announced and Thursday was the first time Golden publicly visited Wichita State.

Proponents of closed searches say they allow candidates from other institutions to apply without fear of losing their employment. Critics say the process keeps the public in the dark about leadership decisions at a tax-funded institution.

Asked if he still would have applied for the position if the search process had been public, Golden said he “hadn’t really given that much consideration.”

“I hope that moving forward, whether it was an open or confidential search, I would hope that I work hard to be able to earn the trust and respect of people in the community,” he said.

Student Body President Kitrina Miller, one of two student members on the presidential search committee, said that Golden had been her favorite candidate early on in the process.

“I was (very pleased with the new president announcement),” Miller said. “Jay was my No. 1 pick from the candidates we had put forward, so I’m extremely happy.”

“He was really student-focused … that was really the No. 1 thing I was looking for.”

Miller said Golden stood out from the crowd because he took matters into his own hands when pursuing the presidential position.

“One thing that really stuck out to me was during his interviews he shared that he came to the search firm,” she said. “The search firm didn’t come to him about this position. He really wanted to come here and he developed that passion for WSU.”

Golden said he became familiar with WSU in his role at ECU because both schools are in the American Athletic Conference.

Golden also said he wants to ensure faculty and administrative positions are “as diverse as the students and communities we serve.”

All of WSU’s presidents have been white men.

“Inclusivity and belonging are critical,” he said, including for first-generation and at-risk students.

As he gets to know the campus community, Golden says he and his wife, Dina, will host a casual gathering at the President’s House each Sunday to allow community stakeholders an opportunity to chat with the couple.

Golden also plans to start a new program called “President’s Leadership Fellows,” in which students and staff interested in potentially taking on administrative roles will be exposed firsthand to those roles.

Prior to working at Duke, Golden has worked as a professor at The University of California – Santa Barbara and Arizona State University. He also has experience in the private sector as CEO of Golden Environmental Management and vice president at WMX Technologies.

Golden’s compensation is still being negotiated.