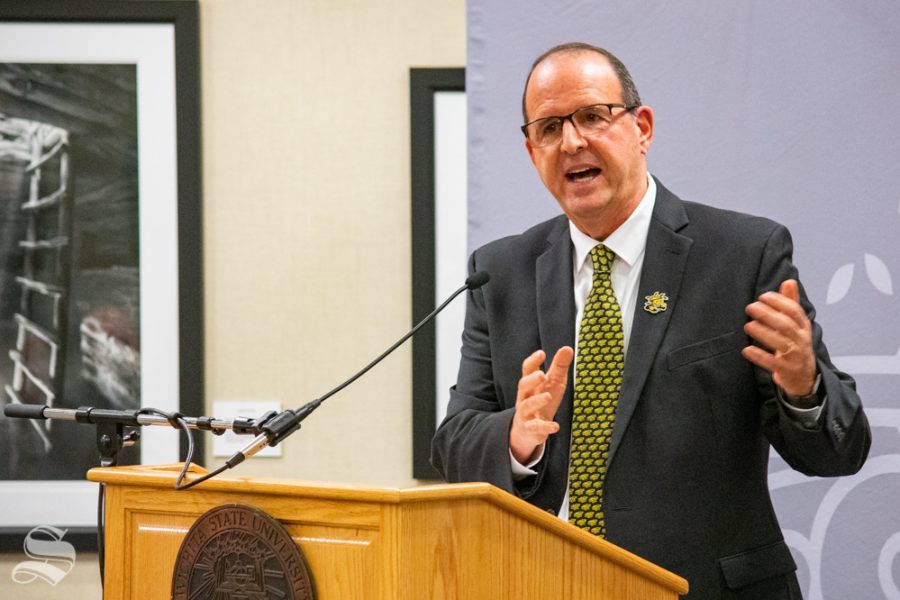 Jay Golden speaks to the presidential announcement attendees about his selection as the new president of Wichita State University on Thursday, Oct. 31 at the Rhatigan Student Center. Golden previously served as the vice chancellor for the Division of Research, Economic Development and Engagement at East Carolina University.

At a press conference on Thursday, just minutes after he was named Wichita State University’s 14th president, Jay Golden acknowledged that he may have to put in some work to earn the campus community’s trust.

“I hope that moving forward, whether it was an open or confidential search, I would hope that I work hard to be able to earn the trust and respect of people in the community,” he said.

With a career background that includes engineering, research, economic development and corporate relations, he has the skill set to continue developing the university’s Innovation Campus. But Golden also seems to have a different approach to public-private partnerships.

In his first address to the university, Golden painted a broad stroke for his plans at WSU: improving diversity and transparency, creating a culture of shared governance, furthering applied learning, capping tuition and growing enrollment.

These all sound like great ideas, and areas in which we also believe the university could improve. But as the old saying goes, actions speak louder than words.

When January rolls around, we hope to have a president who will speak openly with members of campus and the press about the university’s plans. We want to hear from Golden — not just the university’s various channels.

“Whether it’s thinking about new facilities on campus, new academic programs, investments, budget — it’s making sure there’s representation from students, staff, faculty and administrators at the table from the beginning. Because there’s nothing more disingenuous than saying ‘Here’s our plan, we want you to be engaged and review it.’ It has to start at the very beginning,” Golden told The Sunflower in an interview.

We agree. Golden’s selection as president comes after a number of plans have seemingly been dropped in the community’s lap with little-or-no public input ahead of time — including last year’s failed “Shock the Future” referendum and the upcoming Steve Clark YMCA and Student Wellness Center.

Golden seems to have already planted the seeds for his envisioned culture of shared governance, meeting with governing bodies and constituent groups throughout the day after he was named president. That included a 15-minute interview with The Sunflower.

We hope this culture continues to grow, so the university can be on the same page about big decisions.

We also hope to have a president that values diversity and inclusion as much as the students on campus.

Falling along the same demographic lines as Wichita State’s last 13 presidents, it’s obvious that Golden, a 55-year-old white male, is not the most diverse pick. Some students on campus have expressed frustration that the president is not from a more diverse background, and we feel that’s a valid concern. But with a career history that includes ECU, Duke and Arizona State — we hope that Golden has the breadth of experience required to lead a campus as diverse as WSU.

Golden is off to a good start, unveiling plans for a new initiative called the “President’s Diversity Leadership Fellows,” in which students from diverse backgrounds will be able to get firsthand exposure to administrative positions they may be interested in taking on in the future.

And perhaps most importantly, we hope to have a president who has his own vision for the university.

While the university’s higher-ups have made clear that Innovation Campus is a top priority, we hope that future developments can be done in a transparent way that is best for the relationship between students and administration — and ultimately best for the university.