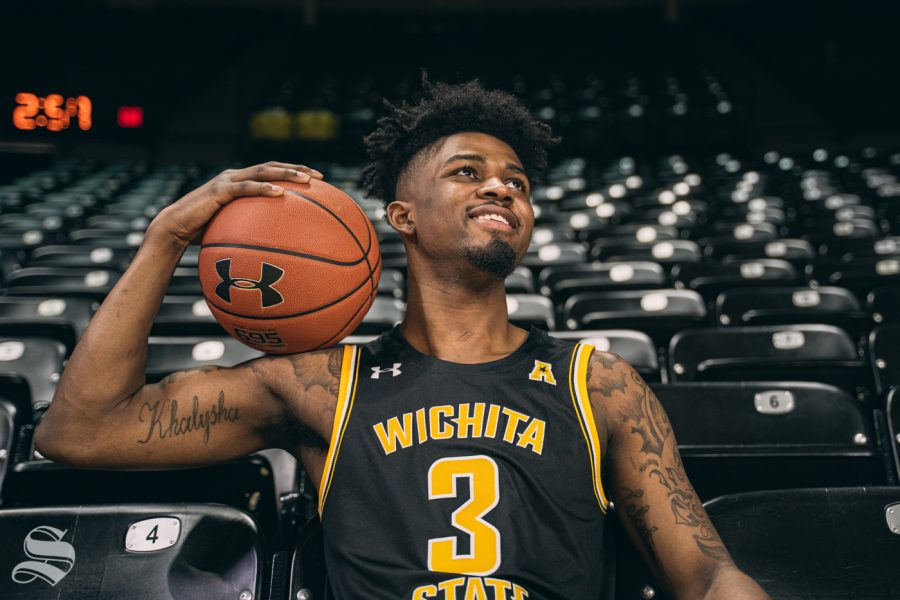 Freshman DeAntoni Gordon verbally committed to Wichita State before his junior year of high school at LeFlore Academy in Mobile, Alabama. Head Coach Gregg Marshall said it was “probably the earliest commitment” to WSU in his tenure.

Asked how he knew so early on that he wanted to bring his game to WSU, Gordon didn’t hesitate: “Their coaching program.”

“They’ve got strong, smart coaches who I just felt like could develop me as a player and get me to my end goal where I want to be — and that’s to make it to the NBA,” Gordon said.

“He can run and bounce like Tigger from Winnie the Pooh,” Marshall said of Gordon in April. “He’s quick and fast and, boy, can he get off the ground and get to the rim.”

Gordon seemed amused by Marshall’s comparison when asked about it at media day.

“That comparison was funny,” he said with a laugh. “I don’t know, but I’m very energetic.

“I’m very explosive — being able to move my strength and move my explosiveness to improve my game.”

Gordon said he’s bringing a “get-better-every-day” mentality to his freshman season while having fun and building team chemistry.

He said he considers sophomore center Morris Udeze to be a role model.

“He’s been a big brother on and off the court,” Gordon said.

Udeze said he’s been impressed by Gordon and WSU’s other five freshmen.

“Something about this freshman class is different, you know what I mean?” It’s just different,” Udeze said.

“I’m excited about the newbies that we have,” Burton said. “We have some shooters, some more ball-handling, and just players that picked up the system very quickly and that are hungry — ready to compete. I feel like they can do good this season.”

On Oct. 19, Gordon was spotted on campus wearing a walking boot. He was not wearing the boot the week before at media day.

“In case of a major injury where the [student athlete] will miss significant time, I do my best to proactively release approved information, but I don’t have anything to report on DeAntoni at this time,” Holmgren wrote in an email to The Sunflower.