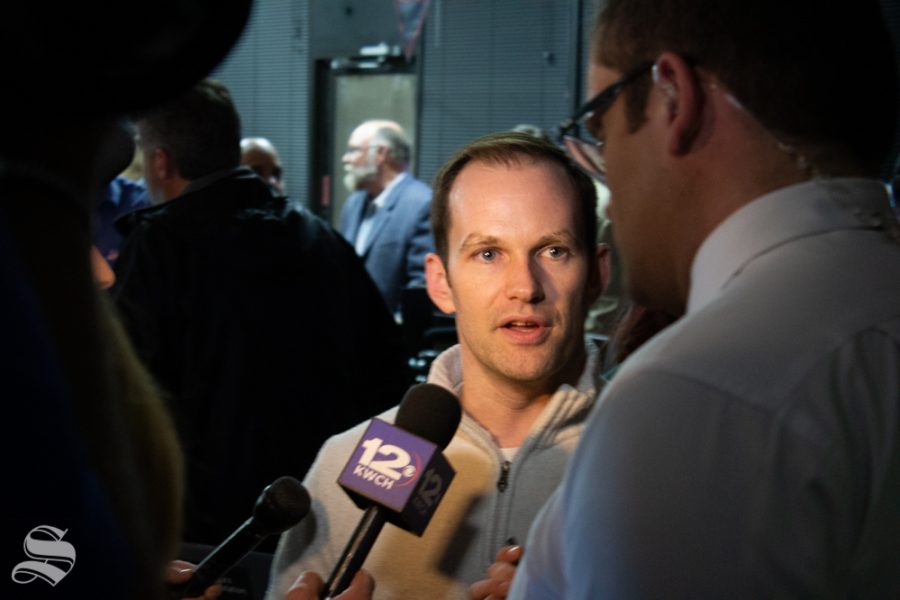 Brandon Whipple speaks to local news reporters during his mayoral watch party on Tuesday, Nov. 5 at Headshots Bar and Grill.

Whipple garnered 46% of the vote to Longwell’s 36%, as almost 20% of eligible voters turned out at the ballot box. Lyndon Wells launched a late-stage write-in campaign that might well have cost Longwell critical votes.

Whipple held an election watch party at Headshots Bar and Grill, where the mood was electric as early returns started to roll in. While Whipple’s supporters cheered each time vote totals were updated, the candidate waited to celebrate until his win was secured.

The first thing he did once victory was declared was embrace his wife, Chelsea.

Wiping tears from his eyes, Whipple seemed to be in disbelief. At a loss for words until someone made him get up on stage to give his victory speech, Whipple stood stunned in front of the crowd.

“This time, it is not just about the community — it is about making sure that Wichita’s best days lie ahead,” Whipple told supporters. “The only way we get there is if we all work together. The future of Wichita is bright, but it’s going to take more work than just on a campaign. It’s going to take all of us.

Across town at Wave, Longwell addressed his own supporters.

“I still think this community’s going to move in the right direction. We feel good about where Wichita’s at,” Longwell said. “I thank you all from the bottom of my heart, and tomorrow, we’ll wake up being just fine.”

On top of conceding the race, Longwell discounted the possibility of a future run for office.

“This is our last election,” he said.

Asked about the lasting impact of his accomplishments as mayor, Longwell joked wryly.

“I don’t think they’re going to tear down the baseball stadium,” he said.

For his part, Whipple said one thing he wants to address once he takes office is the presence of LLC and PAC money in elections.

“This was a pretty dirty campaign — not on our end,” Whipple said. “We’ve had, I think, nine different campaigns or interest groups or entities that were taking shots at us. That’s unique to city politics because the rules were changed a few years ago under Mayor Longwell that actually allows tax and interest groups to take place, or to take part in these types of campaigns. We can tighten those.”

Whipple said he plans to talk to the city council about how to up the ethics codes for Wichita politicians so that there are more stringent rules in place.

Another issue Whipple told The Sunflower he wants to focus on is the retention of young people — particularly those who are college-educated. Whipple said this group of young workers and their families are the people that Wichita needs to retain to be a thriving community.

“By retaining young people, you’ve got to give them opportunities to really fulfill their professional dreams here,” Whipple said.

“A Civil Rights Commission would give a place for people to file reports if they’re being mistreated based on their gender or based on their race. Also, it creates that community standard,” he said.