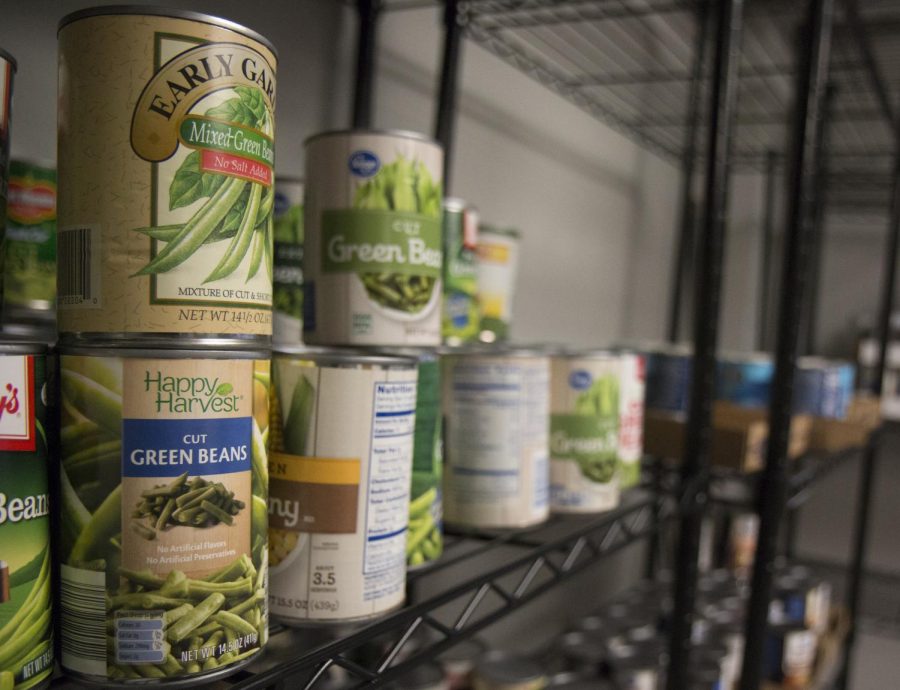 Cans of green beans sit on a shelf in the Shocker Support Locker.

Gabriel Fonseca, SGA co-advisor and assistant director of Student Involvement, said the process for receiving the grant was relatively simple.

“We were approached by Rich Renollet downstairs at Shocker Sports Grill and Lanes and he told us that he had this funding available,” Fonseca said. “We just had conversations about it and figured out a way to tie to the money that Pepsi had set aside for it.”

Fonseca said a Pepsi representative decided to give the grant to the Shocker Support Locker after meeting with SGA and learning about the program and its recent growth.

The Shocker Support Locker was founded in 2015. It is located on the first floor of Grace Wilkie Hall in room 103. Each week, any student with a valid Shocker ID can take up to 25 items, including food, clothing, hygiene products and baby products.

With the extra money on hand, the Shocker Support Locker is working toward refilling its shelves with some of those items.

“We are using a portion of [the grant] to purchase bulk items from Pepsi. I didn’t know this, but Pepsi actually produces more things than just soda … like rice and granola …, so we’re going to use a portion of it to purchase food in bulk,” Fonseca said. “Things that the locker always has like cereal, and oatmeal, and rice products, things like that— we’re able to get it at a cheaper price going through Pepsi.”

With the leftover money, Fonseca said the locker will use it as needed and be able to invest in partnerships with other suppliers.

“The rest of it we’ll use for here and there throughout the year when we need to… to purchase additional products,” Fonseca said. “A big part of it, because we’ve also secured a partnership with Kansas Food Bank, will be utilizing those dollars to purchase items for the food bank.”

Fonseca said that Pepsi’s donation was the biggest one they have received in a single year. He’s hoping that the grant will open up the Shocker Support Locker for more grant opportunities in the future.

“This was a good partnership for us, and a good way for us to be able to utilize the dollars in a way that’s useful for students with the locker,” Fonseca said. “So we’re excited for that.”