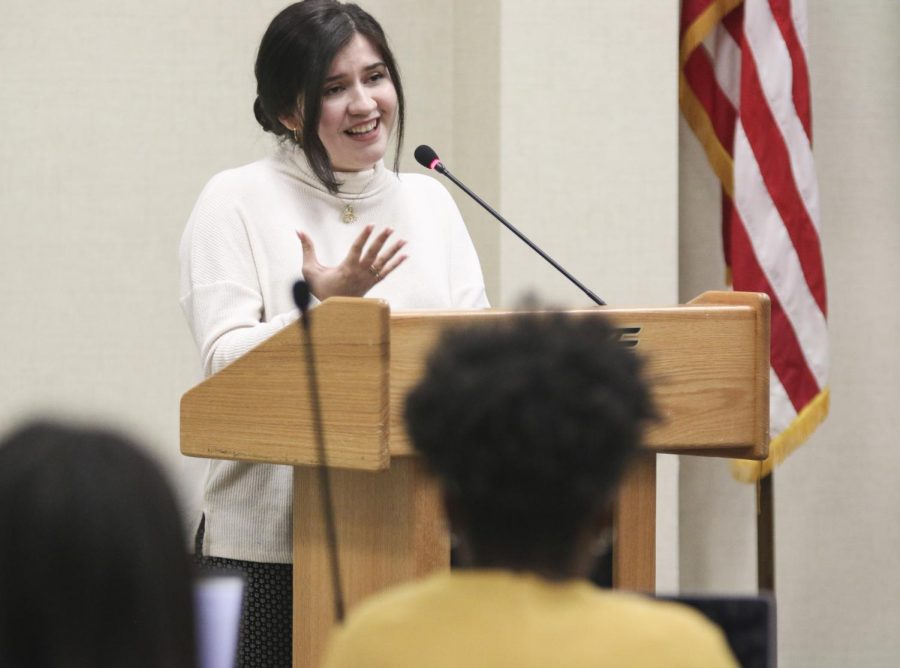 Odalis Jacqueline Vicencio speaks to the Student Senate during its Wednesday meeting. Vicencio, a sophomore studying political science, was appointed a Student Supreme Court justice at the meeting.

“I believe Odalis will make a great Supreme Court Justice because of her ability to make fair, unbiased decisions,” Miller said. “Her excitement and wanting to increase awareness to the student body of the court is what will allow her to succeed in this role.”

The court, usually filled during the fall semester, is composed of six associate justices and one chief justice. Student justices are nominated by the student body president, subject to senate approval.

Vicencio said she works at Commerce Bank on campus and is planning to join the WSU Hispanic American Leadership Organization (HALO).

“I have been looking for ways to be involved on campus, and . . . this one seemed like it was the most interesting one to me personally,” she said.

To prepare for her application, Vicencio said she read through SGA’s Legislative Journal, which acts as a constitution for the organization, as well as the court’s own policies and procedures.

“I was immediately very invested,” she said.

The court has jurisdiction over cases arising from SGA’s Legislative Journal, statutes, and bylaws. It also hears appeals from the Traffic Court and the Library Court of Appeals, and renders decisions in those cases.

During the debate portion of Vicencio’s nomination, two senators spoke in her favor.

“Not only is [Vicencio] very eager to take on this position, but she’s very knowledgeable of this subject and what it withholds,” Sen. Zachary James said.

Sen. Olivia Babin, who also works for The Sunflower, expressed a similar sentiment.

“I had the opportunity to have a class with Odalis this semester. It was civil liberties,” Babin said. “In that class, I got to see the way that she would think about these cases, and the way she would use her analytical skills to truly understand and make the best decision about different cases.”