Survival of the fittest: Shockers outduel Tigers in second half en route to victory 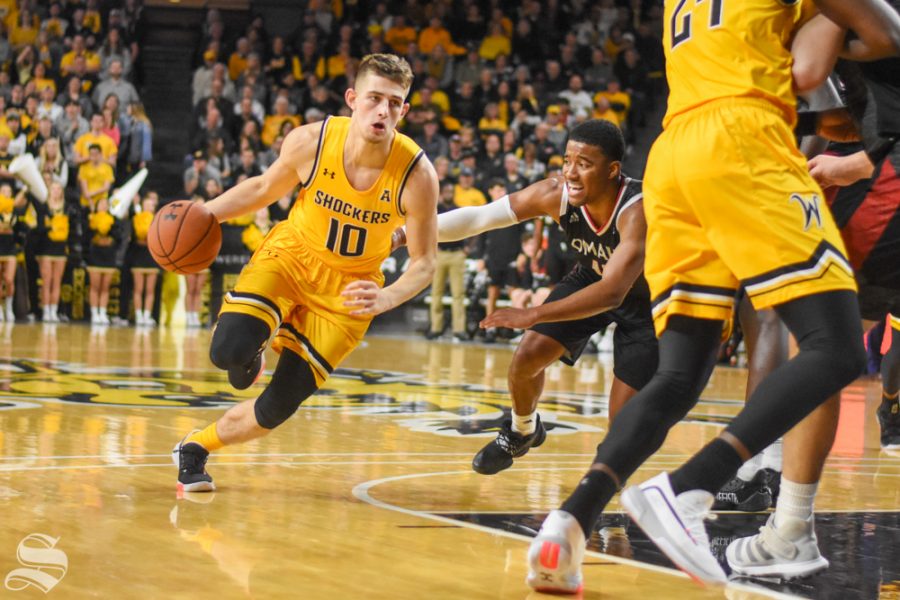 Wichita State sophomore Erik Stevenson drives to the basket to make a shot against the Omaha Mavericks on Tuesday, Nov. 5 in Charles Koch Arena.

College basketball is survival of the fittest. The Shockers prevailed in an ugly contest against Texas Southern on Saturday.

Wichita State was never able to get anything going on the offensive side of the basketball, shooting just 24 percent from the field. At one point in the first half, the Shockers had missed 21 straight shots.

Despite the horrid shooting in the first half, the Shockers only trailed by a single point at the break.

The Shockers started to find a rhythm in the second half, shooting 38 percent from the field and scoring a total of 46 points in the half.

“That’s college basketball. If you can win ugly without playing your best, that’s good,” Head Coach Gregg Marshall said. “It certainly beats the alternative, which is losing. We certainly did not play well. We understand that, they understand that.

“This will be a great week of practice because we should have their full and undivided attention.”

WSU only had three players reach double figures for the game. Dexter Dennis and Erik Stevenson combined for 11 of the team’s 16 field goals, while also tallying 41 points.

Despite it being limited, the experience gained last season has helped both Dennis and Stevenson as they attempt to take on bigger leadership roles this season and take key shots down the stretch.

“It wasn’t a pretty game, but stepping up, putting these guys on our backs for a couple minutes,” Dennis said. “We can talk to them a little bit, lead them as much as we can. I think they’ll listen to us.”

With the offense struggling to get anything going, the team started to attack the basket and ultimately got to the foul line late, where the team has struggled in the past. The Shockers responded from the line going 34-42 in comparison to the 5-12 mark against Omaha on Tuesday.

“We were in the bonus early in the first half and we kept saying drive, be aggressive, but make sure you make a good decision at the end of the drive,” Marshall said. “We went about nine minutes with them having six fouls or seven fouls and we couldn’t get to the foul line.”

One aspect of the team’s game that Gregg Marshall said he was disappointed in was their inability to share the basketball.

“Our point guard today, Grant Sherfield had zero assists — plays 37 minutes and doesn’t have an assist,” Marshall said. “In 40 minutes, we only had one assist from the point guard position. We only had six assists. Obviously, we’re not sharing the ball and getting other people shots, which is what we preach. We have to do a better job of that.”

The Shockers were unable to get much productivity out of their big-men, as the trio of Isaiah Poor Bear-Chandler, Morris Udeze, and Asbjorn Midtgaard combined for only eight points.

Poor Bear-Chandler received his first career start, but Marshall made the start seem more out of necessity than anything.

“Mo’s (Udeze) just getting back from the concussion. Asbjorn did not play very well at all in our first game. Until Jaime gets back, it’s kind of reshuffling the deck,” Marshall said. “I’m going to go with the guys playing the best in practice that week.”

Next up, the Shockers will host Tennessee-Martin (1-1) next Saturday at Charles Koch Arena. The game is set to tip-off at 2:00 p.m.