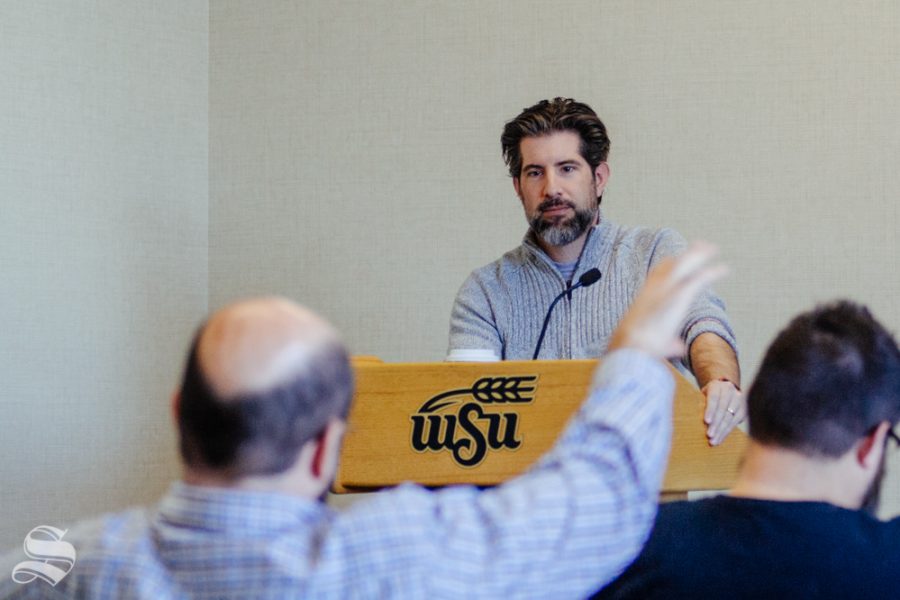 Lawyer Christopher McHugh looks to political science professor Neal Allen while he asks McHugh about a hypothetical case similar to the one involving samples from the Apollo 11 moon landing on Thursday, Nov. 7 in the Rhatigan Student Center.

Christopher McHugh, a litigation attorney and Shocker alumnus, spoke to students on Thursday about his involvement in the legal battle for Apollo 11 moon rock samples.

The samples are now referred to as the Apollo 11 lunar sample contingency bag. As the first set of moon-rock samples collected by humans, McHugh said the contingency bag was a significant piece of United States history.

“We didn’t really know what these guys were going to encounter because we’ve never been to the moon. We didn’t know if this stuff was going to be radioactive or acidic,” Mchugh said.

When the Apollo 11 astronauts made their return to Earth, McHugh said the crew had to unload more than just the contingency. The bag was misplaced and lost for decades until 2016, when Chicago resident Nancy Carlson found the bag in an online government auction for $995.

After purchasing it, Carlson sent it to NASA for confirmation. McHugh said NASA could not authenticate it by its exterior features and deemed that the bag was only a training tool.

After testing the dust inside the bag, NASA was able to authenticate it and trace the moon dust back to the Moon’s Sea of Tranquility. After authentication, NASA told Carlson that she couldn’t have the contingency bag back because of its status as a “national treasure.”

McHugh represented Carlson in the lawsuit that ensued. In that suit, McHugh discovered that the bag was at one point in the personal collection of Max Ary, founder and longtime former director of the Cosmosphere in Hutchinson.

Ary was convicted and charged with stealing artifacts from the Cosmosphere. As a part of the case, Ary was also ordered to sell his private collection to pay restitution — explaining how the contingency bag ended up in an auction.

Carlson ultimately won the case on the basis that the government mistakenly sold the bag in an auction without knowing its significance.

“It’s pretty simple. If you buy something from the government, [and] they sell it to you — they can’t just take it back, regardless of what it might be or what mistakes they might have made,” Mchugh said.

The case originally started in Wichita, but it was moved to Houston in December 2016, where a judge ordered the bag to be returned.

Following the court’s ruling in favor of Carlson, the bag sold for $1.8 million in a Sotheby’s auction. While the bag has not been seen since, McHugh said it still remains in the United States and he expects it to resurface in the next five to 10 years.