3 takeaways from the Shockers’ scare against Texas Southern 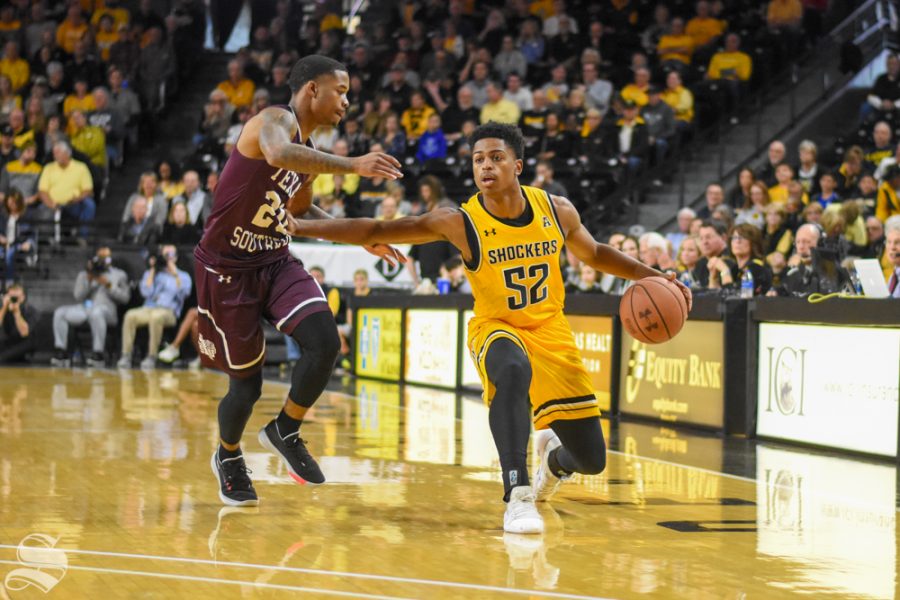 Wichita State freshman Grant Sherfield dribbles to the three-point line during the game against Texas Southern on Saturday in Charles Koch Arena.

Wichita State is lucky to be 2-0 after this weekend.

Texas Southern, a team that lost by 35 to a subpar San Diego State team in their opener, led the Shockers at the half, and almost left Wichita with a win on Saturday. Ultimately, WSU ended up winning 69-63.

A lot of factors played into the close game, but most importantly, it’s the recurring issue of lack of experience for the Shockers.

But it’s not just Saturday’s game that WSU was inefficient in – they weren’t much better in the opener. The Shockers’ 35.8% effective field goal percentage is ranked No. 322 in the country out of 347 total teams. Their 31.1% shooting from two-point range also ranks as one of the worst in the country at No. 328.

Individually, the majority of the Shockers are just not shooting the ball well. Only three players — Dexter Dennis, Morris Udeze, and Grant Sherfield — are shooting over 30% on the season. Dennis, who is averaging 18 points per game, leads the team with a 47.8% shooting percentage, while Udeze (44%) and Sherfield (33.3%) round out the trio.

Against the Tigers, Stevenson did record a career-high 22 points, but it came off of another poor shooting night where he shot 33% from the floor. In total, Stevenson was 6-18 from the field, and just 1-7 from deep. His nine free throws did help the Shockers get over the hump though.

For his career so far, the supposed-sharpshooter from Washington is shooting just 32.2% overall and a low 26.8% from beyond the arc.

In a game where they were shooting 13.5% at the half, the Shockers turned to the foul line in the second half. For the game, they made 34 of 42 attempted free throws.

The Shockers’ plan to attack in the paint paid off in the end as the freebies were the reason they were able to prevail. Overall, WSU shot worse than Texas Southern, but outscored the Tigers 34-17 from the line.

Individually, Sherfield was poised down the stretch, helping seal the win from the line. For the game, the freshman point guard shot 1-10 from the field, but finished the game with 13 points after going 11-14 from the foul line.

WSU is hurting for Jaime Echenique, but the team will be without their star center for at least three more weeks. So far, the replacement trio of Isaiah Poor Bear-Chandler, Morris Udeze, and Asbjørn Midtgaard isn’t getting the job done.

Through the first two games, the trio is shooting combined 6-21 from the field. Even as the biggest players on the court, the three have combined to grab just 22 out of the team’s 91 total rebounds.

In comparison, the forward trio of Dennis, Wade, and DeAntoni Gordon have combined for 44 rebounds, more than double that of the total from the post players.

Without Echenique, the Shockers are also semi-limited in their offensive strategy. Last season, Echenique was able to stretch the floor and knock down threes, something only Chandler has been able to do this season in the five spot. Both Udeze and Midtgaard are restricted to shooting inside the paint, making them easier to defend.

No updates on Echenique’s condition have been given since the media was told last week that he’d be out four weeks with a fractured hand. Theoretically, that time table could lengthen depending on rehab.