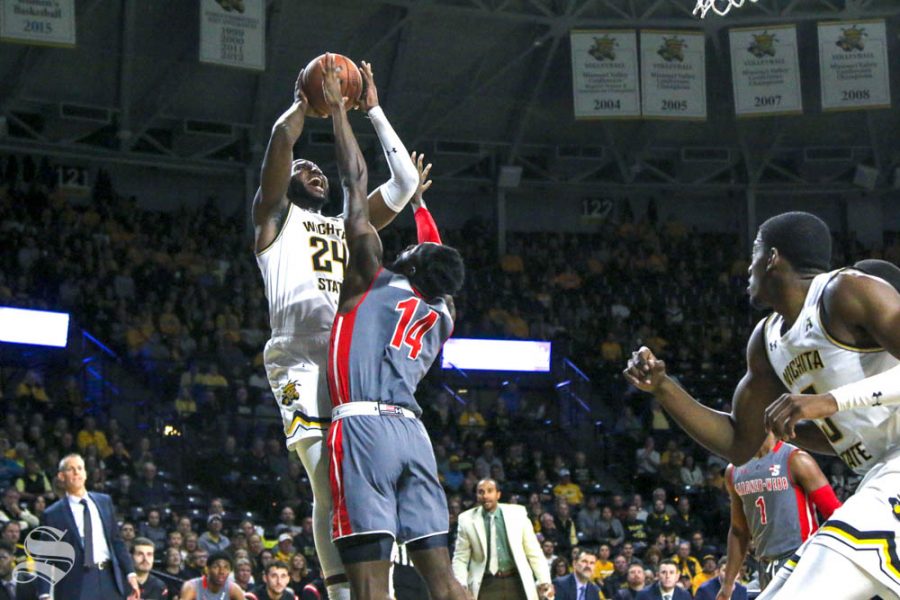 Wichita State sophomore Morris Udeze goes up for a contested shot during the game against Gardner-Webb on Nov. 19 inside Charles Koch Arena.

Morris Udeze had yet another career night on Tuesday.

After tallying a career-high 14 points on Saturday against UT-Martin, the sophomore big-man responded by dropping 15 points on 6-8 shooting on Tuesday against Gardner-Webb.

He would also record four rebounds and a single assist.

Sophomore guard Jamarius Burton also had a productive night off of the bench, scoring 15 points while adding four rebounds to go along with four assists. All together, the Shocker bench outscored the Runnin’ Bulldog reserves 30-15.

The Shockers would defeat Gardner-Webb 74-52.

WSU continued their hot shooting from the weekend in the first half, shooting 16-31 from the floor while knocking down five threes. The defense also proved its intensity, holding Gardner-Webb to 9-22. They also forced 10 turnovers.

For the game, WSU finished shooting 47.4% from the field.

Gardner-Webb was led by Jaheam Corwall who finished with 22 points.

Up next, the Shockers (4-0) take on Oral Roberts on Saturday. Tip is scheduled for 2 p.m.