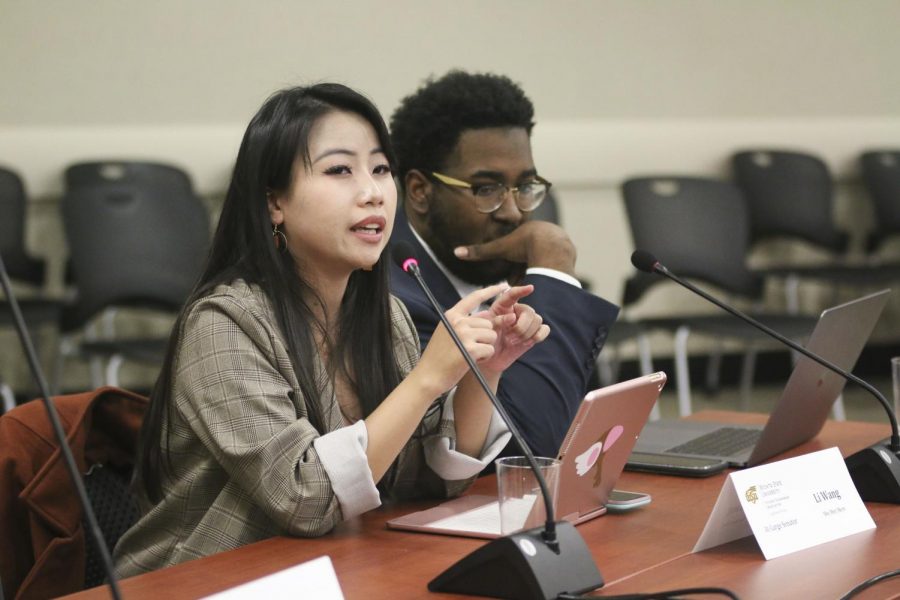 At-Large Senator Li Wang asks questions about the McKinney-Vento Scholarship Act during SGA on Wednesday, Nov. 20, 2019. The bill would establish a scholarship fund for homeless students.

Student Government Association is considering legislation that would establish a scholarship fund for homeless students.

If passed, the McKinney-Vento Scholarship Act would establish a fund of up to $6,000 per year for students who are homeless under the federal government’s identification standards. The legislation was brought to the floor for a first read at the Student Senate’s Wednesday meeting.

SGA Director of Public Relations Mackenzie Haas, author of the scholarship bill, said she was inspired to draft the legislation by the experiences of a friend and the apparent lack of financial support for homeless students at WSU.

“This is genuinely happening to our students and it needs to be addressed, and if we have the funds to do it, we really should make a change on this campus and do that,” said Haas, a junior studying integrated marketing. “And then talking to financial aid and finding out that we don’t have anything — we don’t have any resources out there for students who are homeless.

“We don’t really even talk about it, and to me, that’s really sad because that’s an entire demographic of our student body that’s not being represented or heard.”

Survey results published in 2018 by Temple University and the Wisconsin HOPE Lab said that about 9% of four-year college students reported being homeless in the last year.

It is unclear how many students at Wichita State are homeless.

“We haven’t been talking about [homelessness] long enough to have those demographics,” Haas said.

“Starting that conversation here could do a lot of good.”

If approved, the scholarship fund will be open for applications year-round, starting in fall 2020. The SGA Academics Committee would be responsible for reviewing applications and determining how to divvy up the funds among eligible students.

The potential scholarship is named after the McKinney-Vento Homeless Assistance Act, which was enacted in 1987 to provide federal funding for homeless shelters. If established, Haas said she would use channels through the Financial Aid Office to make sure homeless students are aware of the scholarship.

The senate will vote on the scholarship bill at its last meeting of the semester at 6:30 p.m. Wednesday, Dec. 4 in the Rhatigan Student Center, room 233.

During the question portion of the bill, At-Large Sen. Grant Day asked if a scholarship recipient who found a home would have their scholarship revoked.

Haas said that students would not have their scholarships revoked in that case, but they would have to meet the identification standards in order to reapply and receive the funding in future semesters.

Another senator asked about the scholarship’s qualifications.

“I just want to know what type of questions are going to be asked to get an accurate representation of [each student’s needs],” Sen. Kylie Lipetzky said.

Haas said that each student who applies for the scholarship would need to submit a one-page essay to demonstrate their need.

“What would be the deciding factor on whose deserving of that and not deserving? I feel like there needs to be a standard,” Lipetzky said.

SGA Co-Advisor Gabriel Fonseca said the senate should be careful not to make the requirements overly specific.

“I think, sure, we can establish some of those baseline guidelines, but I would also caution the senate to put too many stringent requirements because you don’t want to put yourself in a situation where no one is qualified for the money,” Fonseca said.

“Who are we going to fund based off the most need? And that’s the tricky thing for the Academic Committee . . . Unfortunately we can’t give the money to everyone.”