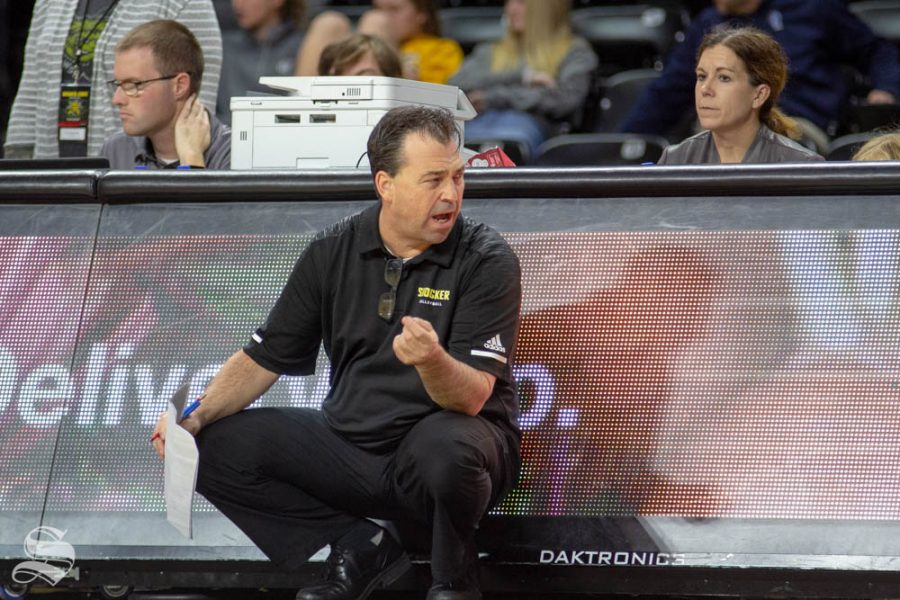 Wichita State Head Coach Chris Lamb reacts to a call during the first set of the match against Tulsa on Nov. 15 inside Charles Koch Arena.

Despite a rocky season for Chris Lamb’s Wichita State volleyball team, things are looking up for next season and beyond.

After playing through a difficult schedule that saw a young Shocker squad go 9-19, things look to be going in a positive direction for WSU. Following the Shockers’ senior-night win over Tulsa, Lamb was optimistic about next year.

“Through it all, here we are with some nice performances later in the year — certainly some I’d like to have back. I didn’t get to say this about last year’s team at all, that’s been wearing on me for a long time.”

After not receiving much playing at the beginning of the season, Rohling, a true freshman, took off at the end of the season, tallying 22 kills in the final two games of the season. Rohling’s increased playing time boded well for the Shockers’ offensive output.

After originally finding success as a middle, Wright transitioned to the right side for the 2019 season.

After some growing pains early on, Wright showed flashes of brilliance that could indicate future success at the position.

“Easier said than done — she certainly had her moments,” Lamb said. “I think our two best wins of the year came against Tulane, and tonight was Emma Wright being successful on the right side.”

Another part of the offensive success for WSU late in the year was improved play out of the middle. Early on this season, opposing teams were able to focus on the outside hitters — limiting WSU’s success.

“With the schedule we put together, you’re not going to beat those guys that way,” Lamb said. “We were a bit trapped by it, and seeing us dig our way out of that — it’s hard.”

Senior Kara Bown said she was impressed with her teammates’ growth throughout the year.

“I think there’s a big learning curve that comes with college volleyball, and they’ve come in and worked hard and learned a lot, and now they’re really understanding what we’re trying to do with our system, and they’ve started to run with that,” Bown said.

All in all, the outlook for WSU moving forward seems bright. On top of returning players who will have some experience under their belts, WSU has also added 10 signees.

“It just seems so much fresher around here and brighter,” Lamb said. “We’ve good young talent, good young kids coming in. Our work this year will certainly always be remembered.”