ANALYSIS: Which Shockers are trending up and down? 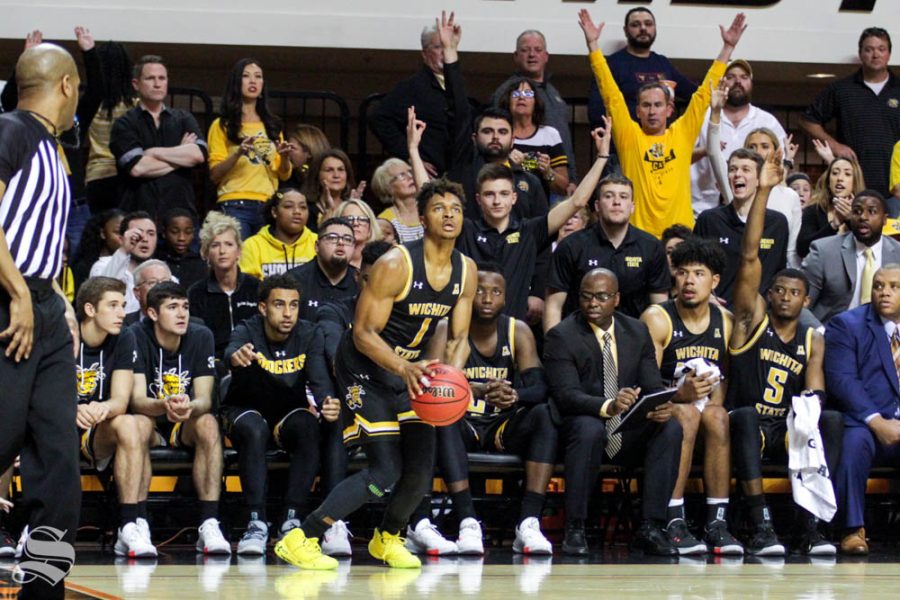 Wichita State freshman Tyson Etienne prepares to shoot a three during the second half of the game against Oklahoma State on Sunday inside Gallagher-Iba Arena.

Wichita State left their mark with a 80-61 lopsided win over Oklahoma State on Sunday in Stillwater. With the win, the Shockers moved up 14 spots in KenPom, from being ranked No. 51 to No. 37 in the country.

But that’s not all.

On Monday, the team cracked Andy Katz’s Power 36 rankings at No. 33 and even made their first appearance in Joe Lunardi’s ESPN Bracketology, which predicted the team would make the NCAA Tournament if it started today. Lunardi has the Shockers as a No. 10 seed in the South Region.

But it’s not just the team’s reputation that’s trending upwards — it’s individual players and the team’s style of play as well. Here’s a statistical analysis of who’s on the rise, and who’s on the downfall for the Shockers ahead of Saturday’s annual INTRUST Bank Arena game against Oklahoma:

The Wichita State guards are hot. This was on full display Sunday against the Cowboys.

Head Coach Gregg Marshall elected to start his three-guard lineup on Jamarius Burton, Tyson Etienne, and Erik Stevenson yet again, and the trio didn’t disappoint. Combined, the three went off for 39 points on 48.3% shooting, 17 rebounds, and 15 assists with just five turnovers in the win against the Cowboys.

Marshall said he was also impressed with Etienne and Stevenson’s ability to knock down open shots.

“We were unselfish. We were getting into the lane and finding Tyson (Etienne), finding Erik (Stevenson),” he said.

Etienne led all scorers in the game with 19 points, while Burton recorded a near triple-double, tallying seven points, eight rebounds, and 11 assists. Stevenson finished with 13 points on 50% shooting.

Etienne was named the American Athletic Conference freshman of the week  on Monday for averaging 16 points per game and shooting 8-13 from three last week. Burton was named to the AAC honor roll for the second time this season for his efforts by averaging 10 points, 5.5 rebounds, and seven assists in the last two games.

Dexter Dennis hasn’t been the player that he was a season ago. After starting off scorching hot in the first two games of the season, averaging 18 points on 47.8% shooting from the field and 50% from three, he’s fallen into a sophomore slump.

Over the last six games, Dennis is averaging just 3.2 points per game on 7-43 shooting from the floor (16.3%), which includes 3-28 shooting from downtown (10.7%). He was held scoreless on 0-5 shooting against the Cowboys on Sunday, with four rebounds and zero assists.

But it’s not just Dennis’ scoring ability that has taken a turn towards the downward trend. It’s the rest of his game as well – both rebounding and distributing the ball.

As someone who was seen as a “do it all” type of guy last season, and someone who showed flashes of being a reliable rebounder, the sophomore has taken a step backwards this season, especially in this last stretch of games.

In the past six games, Dennis is averaging 3.1 rebounds per game, compared to his 5.3 rebounds from a season ago. As for distributing the ball over those six games, he’s dished out just five assists and has had three games where he didn’t record a single assist.

Jaime Echenique’s senior campaign didn’t start out the way he wanted to after breaking his hand before the first game, but since his return, the center from Colombia has made his impact known.

Echenique made his season debut on Nov. 23 against Oral Roberts, right before the team’s trip to Mexico for the Cancun Challenge. In his five games this season, the senior is averaging 9.6 points and 4.6 rebounds per game. On Sunday against Oklahoma State, Echenique was one of three players with double-figure scoring – posting 13 points on 5-7 shooting. He also knocked down a three-pointer.

Echenqiue’s return has just made Wichita State that much more deep, and Marshall knows it.

“That’s the beauty of this team. There’s a lot of interchangeable pieces,” Marshall said during Tuesday’s press conference. “There are so many guys that can help us.”

Currently, five Shockers are averaging double-figure scoring, if rounded up. Stevenson leads the team with 13.4 points, Etienne with 11.4 points, Burton with 9.9 points, Trey Wade with 9.6 points, and Echenique with 9.6 points per game.

Marshall also touched on the role players Tuesday, mentioning that any player on the roster can score in double-figures anywhere and at anytime.

“That’s always been our M.O.,” Marshall said. “I mean look at Morris Udeze, who barley played the other night. He was our leading scorer in back-to-back games at one point. Is that what he’s known for? No. But he set career high’s in back-to-back games. People have been helping out in other ways.”

Marshall also noted that Dennis and freshman point guard Grant Sherfield were others who could catch fire on any given night.

“I mean, 12 of them play now [scholarship players],” Marshall said. “I’d love for all of them to score in double-figures. If we can score 120 [points], we are going to be pretty good.”

Udeze broke onto the scene for Wichita State after scoring career-highs in back-to-back games against UT-Martin (14 points) and Gardner Webb (15 points). But since then, Udeze hasn’t found the same success, as his best game since then has been an eight point performance against Central Arkansas on Dec. 5.

In the past five games, Udeze is averaging 2.4 points per game on 41% shooting inside the paint. He’s averaging 2.6 rebounds per game in those matchups as well.

Against OSU, Udeze hardly saw the floor. He played just one minute of action and picked up three personal fouls, something he’s struggled with all season. In the last five games, he has more fouls (14) than points (12).

“He barley scratches because he can’t stay out of foul trouble,” Marshall said.

Udeze is currently the second-best scoring big on the team, averaging 5.8 points per game, only behind Echenique. Junior post Asbjørn Midtgaard is averaging 2.6 points while sophomore Isaiah Poor Bear-Chandler is tallying 2.4 points per game.