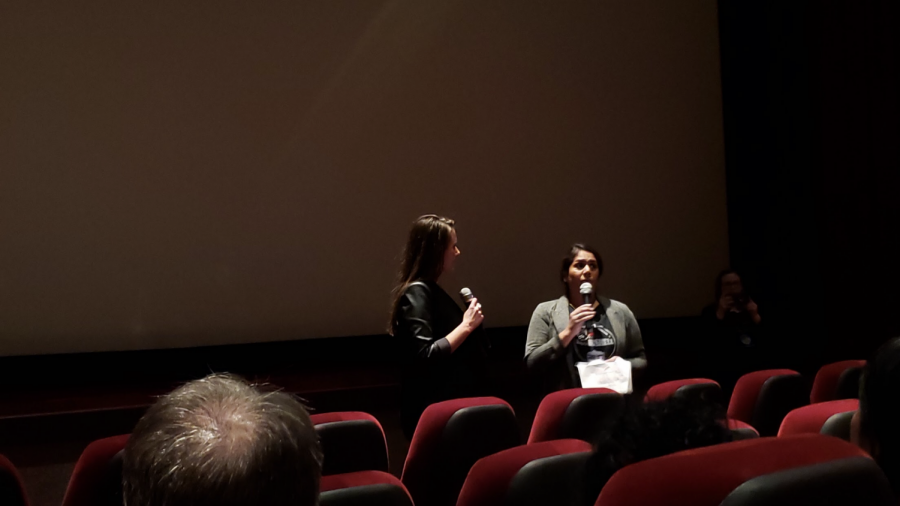 The “Bombshell” film screening and discussion was held on Jan. 4 at the Warren East theater.

The “Bombshell” film screening and discussion put on by Mamafilm and The Wichita State University Center for Combating Human Trafficking lived up to its name this weekend at the Warren East theater.

The event ended with a bombshell announcement — that Gretchen Carlson will be the keynote speaker at the CCHT conference on Jan. 31.

“Bombshell” is based on the real-life sexual harassment case that shook Fox News to its core in 2016. The film follows three women at different points in their careers who each suffered sexual harassment at the hands of Fox News founder Roger Ailes before ultimately helping to oust him from the media company.

The film posits that Ailes used to make women stand up and twirl for him in his office when they were discussing the future of the woman’s career.

“Television is a visual medium,” he said in the film repeatedly.

His idea that women’s legs should be highlighted during Fox News broadcasts carries throughout the film, where Ailes is seen asking women to wear shorter skirts. In a scene just after Ailes is ousted, a woman strolls through Fox News headquarters in a pantsuit — something previously unheard of.

“With Roger, it’s always about loyalty. To get ahead, you have to give a little head,” Carlson said in one scene when she’s meeting with her lawyers.

After a series of sexual harassment allegations from multiple women emerged against Ailes, he stepped down from his position as CEO of Fox News in July of 2016. He died in 2017 at the age of 77.

One of the things that the movie brings to light is the double-victimization for women who are harassed. The women at Fox News are seen enduring the demeaning situations of systemic harassment, which ranged from everything from on-air comments by other reporters about their looks to a public debate about Kelly’s menstruation that was brought on by then-presidential candidate Donald Trump.

In one scene, Kelly begins to seek out women who have been harassed by Ailes, and she is deciding what course of action to take in response to Carlson’s lawsuit against Ailes. She is blamed by Pospisil for not reporting the behavior sooner, which she said could have prevented Ailes from continuing his harassment of women.

Following the film screening, CCHT Executive Director Karen Countryman-Roswurm and Mamafilm founder Lela Meadow-Conner, led a discussion to explore the mechanisms of silence as they pertain to victims of all forms of violence. This dual victimization was one of the topics of discussion.

“Does the victim owe it to other, future, potential victims?” Meadow-Conner asked the audience. “Also, can you give that victim the grace to not take on that responsibility when they’ve also been a victim?”

“I think that women face this every day,” Countryman-Roswurm said. “This is really our story. It’s obviously been made “Hollywood.” Every woman in this movie appears as though she’s perfect — size zero, you know blonde-haired and blue-eyed.”

Another issue raised was the lack of diversity in the film.

“When we say “bombshell,” we always think blonde bombshell, but it’s brown skin, it’s brown hair, it’s curly hair, it’s a variety of women who face this treatment in their workspaces,” Countryman-Roswurm said. “It really bothered me that there weren’t women of other races and ethnicities and backgrounds illuminated throughout this film, because it really is our story.”

“This kind of unhealthy culture and environment can be found in so many ways,” Meadow-Conner added.

Both women agreed that breaking the silence takes the work of more than just whistle-blowers. Anyone in a position to speak out against harassment or discrimination should use that position to help put a stop to these systemic inequalities and injustices, they said.