How Journey East Asia Grill came to be 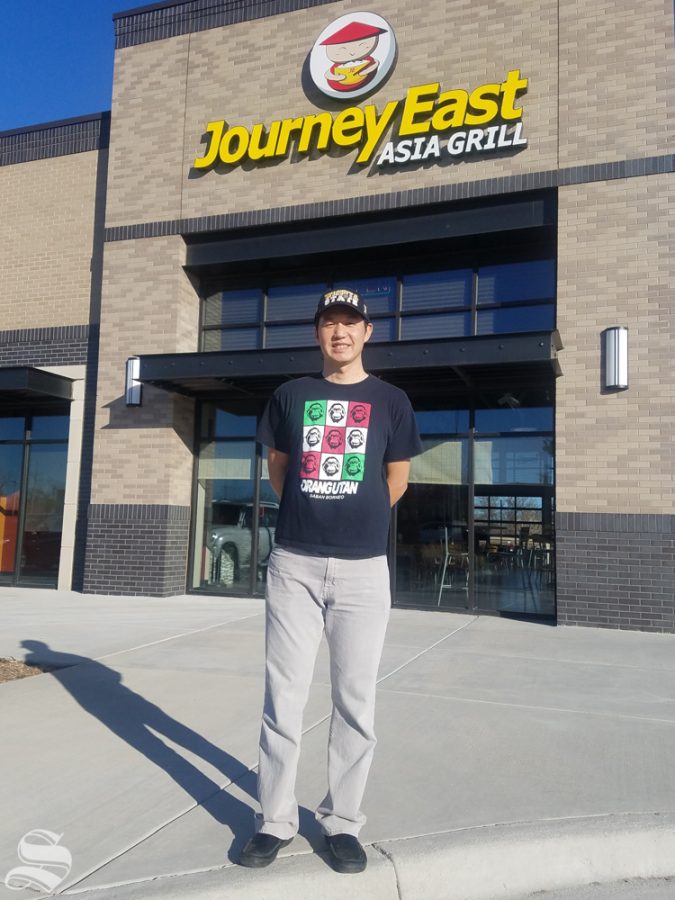 Upon entering the restaurant, the first thing one sees is a world map with pins marked on it. Walking through a door to the right reveals a spacious interior. There’s natural light seeping through the many windows and a view of the lake by Braeburn Square. To the left is a line of food for one’s choosing and above it, the menu.

Journey East Asia Grill features a mixture of food from different East Asian countries, including Malaysia, China, Japan, Korea, and Thailand. Tsen wanted to go with this concept to introduce different flavors to people who may only know the flavor of a certain country.

“I like to try new things, so that’s why I like the outcome of this concept instead of everything being focused on one country,” Tsen said. “That flexibility makes sense to us, and we think that it is also a way to [encourage] more people to be brave and try a different country’s taste.”

Tsen said he and his friends first came up with the idea of opening a restaurant about 10 years ago while they were on a biking trip.

“All the partners like to bike . . . so, every couple of weeks, we all get in the car and drive somewhere to find a trail to ride,” Tsen said. “We would have a little time in the car to brainstorm like, ‘Oh, I wonder what kind of business we can all get into.'”

Tsen frequently cycles with his friends who are supportive of his endeavors. Once the restaurant opened, they all came out to eat. Tsen said he hopes to build a bike rack outside of the restaurant for his friends, partners, and anyone else who rides.

“We speak the same language. We are like a family,” Tsen said.

Six-and-a-half years after that fateful ride brainstorming business prospects, Tsen and his partner, Koh, began to contact the university.

“Then, about three-and-a-half years ago, before we would see any of the developments here [at Braeburn Square] we [would] always check with the school to see what was happening. So, as soon as we knew that they were planning to have this [Braeburn Square] we thought, ‘That’s a good opportunity,’” Tsen said. “Eventually, it led to this. We got the spot, the vision began to come alive, and now we are here.”

They were firm on their decision to open the restaurant on a college campus to cater to students.

“When I first came here, I didn’t have much experience, and to have an opportunity to work [on campus] and at a restaurant, can help a youngster to learn life skills. It’s not just a job — you need people skills, you need communications skills, time management, and maybe you are just cleaning dishes, but it helps you put some exercise in too,” Tsen said.

“We see this as an opportunity to help some youngsters and people that go to school and who maybe don’t have any job experience at all.”

Tsen arrived to the United States about 25 years ago from Malaysia. Upon entering the work field, he came across a lot of obstacles, resulting in him sympathizing with recent graduates.

“That’s something that for a lot of students, I think especially for the international students, is quite hard. I can feel their pain. It’s hard for me to see it happen since I have been there so I know exactly what they’re going through.”

Although he didn’t end up working in a field relevant to his major, Tsen still ended up doing fairly well for himself — after all, he is part-owner of a restaurant.

“There’s always a job out there, but sometimes after you study and go out to find a job that relates to your field, sometimes it doesn’t always happen,” Tsen said.

“But still, it’s not the end of the world. You always learn something that you can use.”

Trying his best to have “as little carbon footprint” as possible, Tsen and his partner decided to make Journey East eco-friendly. The take-out boxes are made from paper material instead of the usual styrofoam, and all of the utensils and dishes for dining-in are reusable. Tsen says it’s important to “take care of our planet.”

Starting at $8.50, the menu includes pre-made bowls or the option to build your own bowl. Each bowl comes with a soup, and all the food is MSG free. There is also a vegan and keto option for pre-made bowls.

Boba tea, smoothies, gelato ice cream, and beer are also coming to the restaurant. Tsen said he also hopes to reach out to WSU music students to see if they would like to play live music.

“If they need an outlet to showcase their talent, we are thinking of giving them a spot to play live,” Then said. “That’s something that is on the back of my mind.”

The purpose of the world map with pins is to encourage customers to place a pin in the country/state of where they are from, showcasing how diverse Wichita truly is.

“It’s a new adventure for me,” Tsen said of the restaurant. “We believe in our food and in our concept . . . so whenever you want to have a meal come check us out.”