OPINION: What is with this new Golden guy? 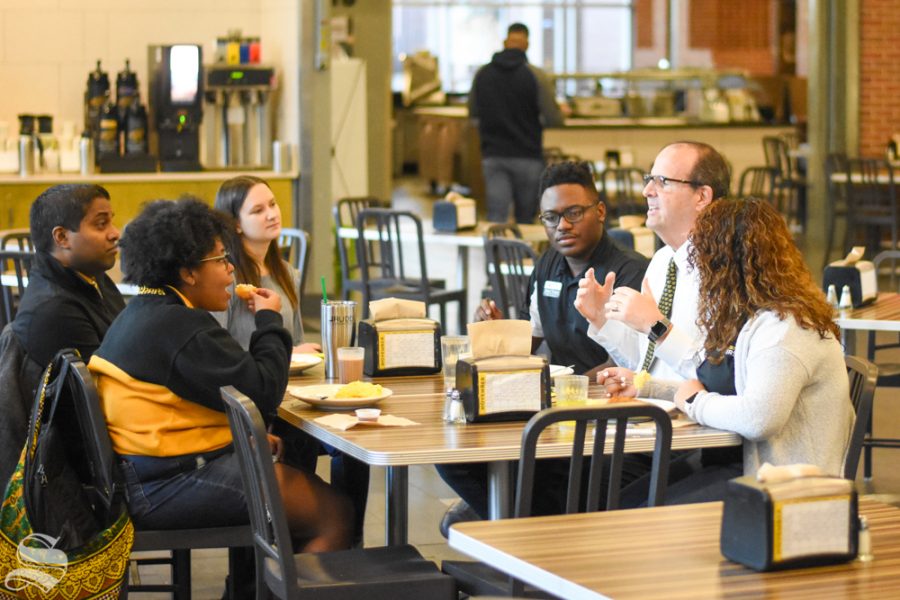 Wichita State's new president Jay Golden eats breakfast on Tuesday at Shocker Hall with community stakeholders, including a group of Diversity Interns and Bobby Gandu, assistant vice president and director of undergraduate admissions. Golden was named the 14th president of WSU in October.

I have a strange feeling about Jay Golden, Wichita State University’s new president. I couldn’t put my finger on why, but I finally figured it out — I’ve met him.

Let me explain. I’ve been heavily involved as a student at WSU all three years that I’ve been here. I have attended numerous campus events. During that time, I never saw President John Bardo with my own two eyes. I never had a conversation with him. If he hadn’t died, I don’t think I could even have told you what he looked like.

President Bardo did a lot for this university, but he was never a part of student life. The administration of this university has always felt like a heavy cloud above the students, separate from our experience. Having a new president who welcomes student feedback and really values the student experience is different.

I will never forget when President Golden asked the Diversity Ambassadors to meet on Twitter. I was floored — the PRESIDENT wanted to speak with students? That was so incredibly foreign that I wanted to know the angle.

I covered the meeting for The Sunflower, and I was skeptical, if I am being completely honest. I was shocked by how genuinely he seemed to want students to share their opinions and experiences with him.

There was a moment in that meeting when he offered his business card and help on a project to a student. At a recent basketball game, President Golden tossed students snacks and handed out basketball tickets so students could sit in his section. He offered to meet with students for breakfast.

He seems to have a genuine interest in students and what they want from the university.

As a WSU student who has become accustomed to an uninvolved president and administration, it’s hard to know what the norm is at other universities. Should we expect these things from a president or are we just lucky to have one who’s doing the right thing so far?

I am not writing this to sing the praises of the new president. While I am excited to see what he will do to make WSU better, I still fear this could all be a farce and he will hole up in his office hsoon, leaving us right where we were before.

It is unfair to the students they serve for an administration to be completely separate from the student experience. The WSU administration has proven time and time again in recent years that they do not like to listen to student concerns, in everything from the new business building to the YMCA.

We deserve an administration that listens to us and cares about the experience we are paying thousands of dollars for — whether it is the norm at other universities or not.

I am excited to see what President Golden does at Wichita State. I genuinely hope he maintains the involvement in student life that he has since stepping foot on campus. I look forward to the future of the university and I hope it remains as bright as it seems now. With luck, this is the new gold standard.