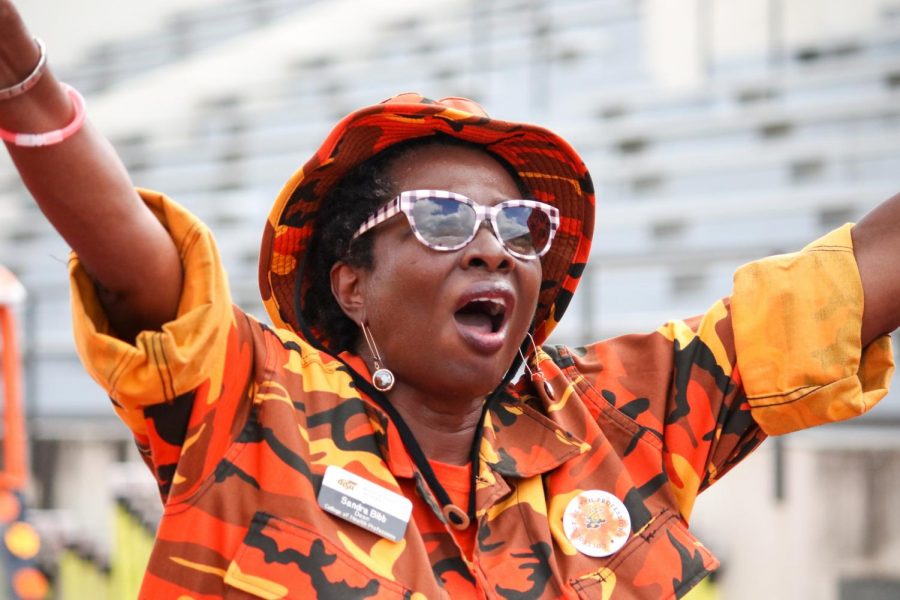 Former College of Health Professions Dean Sandra Bibb cheers during the Clash of the Colleges on Aug. 23 at Cessna Stadium. Bibb abruptly resigned earlier this month.

More than a week after College of Health Professions Dean Sandra Bibb resigned from Wichita State, the university has provided no information to contextualize her abrupt departure.

The Sunflower filed an open records request for Bibb’s separation agreement with the WSU General Counsel’s Office, but was told that no such document exists. Asked to comment on the resignation, Provost Rick Muma and Acting Dean Linnea Glenmaye both declined on grounds that they could not discuss personnel issues.

Health Professions students told The Sunflower they had no indication that Bibb planned to leave. They were informed of her departure via email.

“It was a big surprise,” junior Sara Idol said. “We have no idea what happened. We all loved her.”

Bibb came to WSU as dean in 2014. Less than a week before her resignation became public, she shared photos from her “winter break travels” on Twitter and retweeted a video from the WSU men’s basketball game against Memphis.

Max Karst, vice president of his junior nursing class, said he sent Bibb an email the day before he learned of her resignation.

“It’s super sad. I was really close with her,” Karst said.

Idol said her favorite memory of Bibb is the enthusiasm she brought to the 2017 Clash of the Colleges, when the College of Health Professions claimed the title.

“It was great,” Idol said. “She had a big stick and she had a megaphone and was yelling and cheering.”

Bibb did not respond to a voicemail requesting comment for this story Monday morning.

Glenmaye told The Sunflower she is “honored” to serve as acting dean, but does not expect to be in the role for more than a few weeks.

“My major priority is to maintain the smooth functioning of the College until an Interim Dean is appointed,” she wrote in an email.

Glenmaye said she has no intention of applying for the full-time dean position.