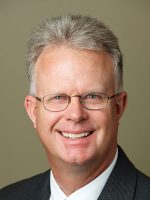 Steve Arnold has been named interim dean of Wichita State’s College of Health Professions, according to a university release. Arnold, who will assume the dean role on Feb. 10, has served as associate dean of the college for seven years.

“Dr. Steve Arnold is a valued colleague and experienced administrator,” Provost Rick Muma said in the release. “I have confidence he will provide admirable interim leadership in the coming months as we assess the needs of the college and search for a permanent dean.”

Arnold, a public health sciences professor, will take over for acting Dean Linnea Glenmaye, who has been serving in the role since Sandra Bibb abruptly resigned as dean last month.

WSU has still provided no information to contextualize Bibb’s departure. A Sunflower records request revealed that no separation agreement between Bibb and the university exists.

According to the release, Arnold will not seek to be considered for the permanent dean position.