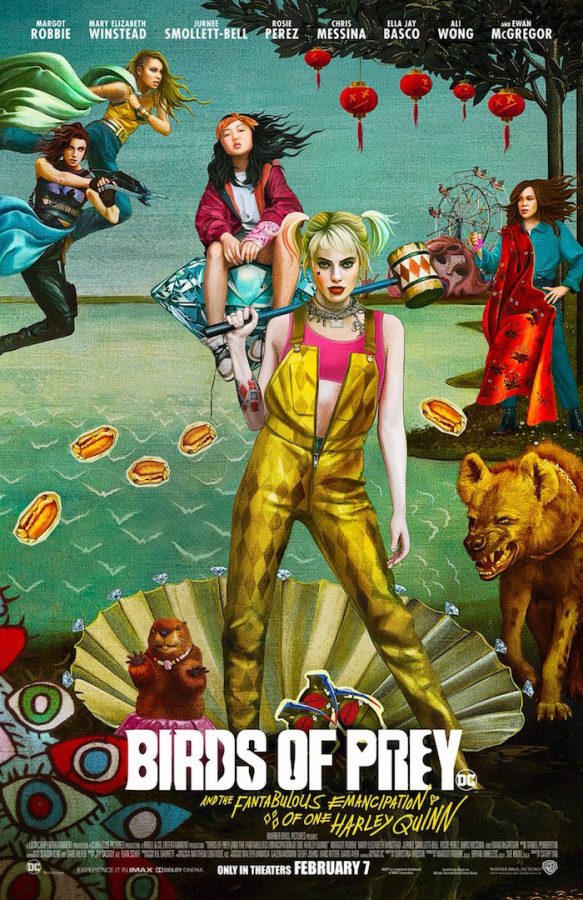 Movie poster for "Birds of Prey".

Take the worst, messiest break up you’ve ever heard about and then add a crime-scapade, revenge killing, accidental jewel heist, and a ruined breakfast sandwich – that’s “Birds of Prey.”

The film opens with an animated sequence narrated by Harley Quinn, played by Margot Robbie, about her life and where it went wrong, specifically, how it was “fantabulous” until her boyfriend, the Joker, broke up with her.

Harley goes through the five stages of grief: breaking a man’s legs, buying a hyena, naming it after Bruce Wayne, cutting her pigtails off, and blowing things up. All normal responses if you ask me.

Yet, what’s important here, is that among everything this film does right – it’s visual style, Robbie’s stellar reprisal of her role as Harley Quinn, and a soundtrack viewers will blare in their cars for years to come – it falls short story wise.

Firstly, Harley is an unreliable narrator. She shows us the version of events she sees, and while yes, that takes us through the events of the film, twists and missed connections galore, it also makes us question how much stake we should put in her story.

Secondly, the story heavily relies on flashbacks. Not to spoil anything, but the constant “but wait, I forgot this detail” style makes the connections of Harley’s eventual girl-gang, the Birds of Prey, able to happen while also making me ask how it happened. Spoiler: a pick-pocket.

Finally, I don’t love this story because I enjoy characters who I can identify with and have some reason that I feel like I need to care about the story they’re telling me. Harley just makes me jealous that I can’t backflip while wearing roller skates.

“Birds of Prey” is a story of interconnected plotlines and women coming together to save the day, and I can appreciate what it was trying to do. Every girl wants to see a movie where someone even vaguely like them saves the day, and director Cathy Yan did an incredible job keeping that in mind.

While I’m not entirely sold on the plot, I did enjoy watching the film, as it’s an action film and keeps your eyes trained on the screen the entire time, even when a guy’s leg is broken so badly that you can’t help but stare.

Maybe I’m just being overly critical here, but that breakfast sandwich flying through the air and hitting the street in pieces was just a bit too far.