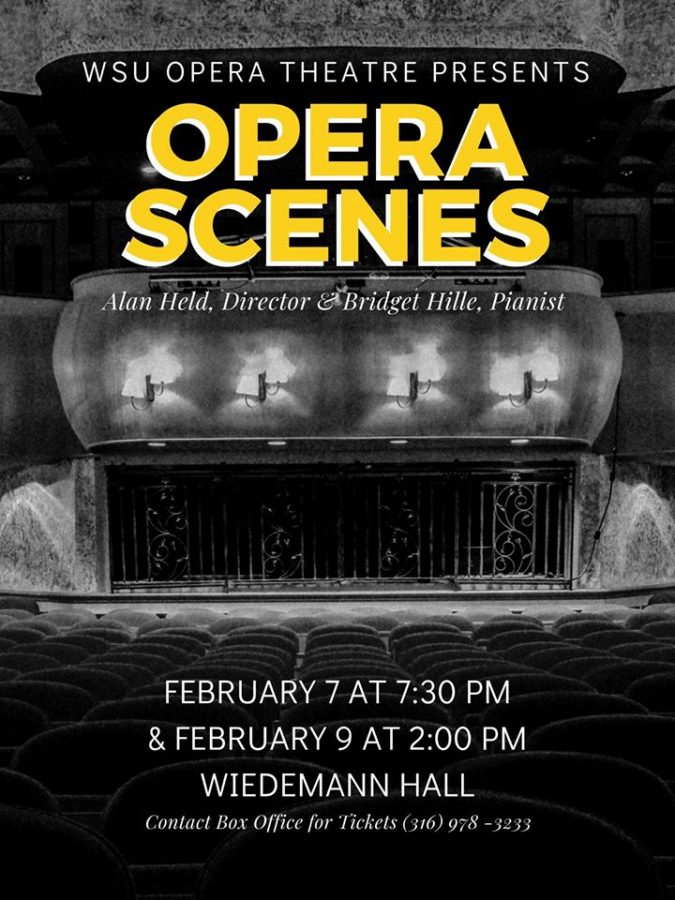 Wichita State University’s School of Music Theater opened their 2020 season with a performance of “Scenes and Songs” Friday night. Directed by Alan Held, with pianist Bridget Hille, the performance projected back some 400 years with ballads from Mozart, Beethoven, Massenet, Verdi and others making for an antique atmosphere throughout Wiedemann Hall.

The evening began with Offenbach’s haunting and lovely “Barcarolle” sung by Marina Brule, as Nicklaus, and Ashleigh Burrow, as Giulietta. The performance was stark, nearly rocking every head in attendance back in awe of the pair’s cords of which projected out the doors in a fitting address to the evening.

Next, Janet Butler and Maria Whitmer sang a duet to Monteverdi’s “Pur Ti Miro” which was a sublime exclamation of the couples love and dedication.

After, arguably the most humorous of the evening, was Mozart’s “Suicide Scene and Duet” sung by Chase Simmons as Papageno, wielding a yellow feather scarf as his noose, and Katriana Kisner as his Papagena. Driven to utter madness by his love for Papagena. Papageno nearly ends his life, voicing his missed love for his misses at a loud tone, until the three spirits, Beatriz Melendez, Kaitlyn York, and Anna Wade, sing in a plea for him to cut the noose, and finally his Papagena appears. The two reveal separate hats, one sporting the Kansas City Chiefs, and the other Wichita State Basketball; they both rekindled their love, yet revealing they still share opposite tastes.

Later in the evening, Brule returned to the center stage in a dramatic fight scene with Madison Roth’s playing as Hansel and Gretal. The two did not miss a note as they scuffled across the floor. They seemed to truce as they sat kneeling to each other, then, suddenly a humming, like a butterfly, rang throughout the auditorium. The performers sat expressionless as the hum increased and seemed to float in waves to the ceiling. The humming was none other than Puccini’s “Madama Butterfly,” forcing those in the audience to close their eyes in a sweet adoration to the vibration.

The climax of the evening was the performance of Benjamin Britten’s “Peter Grimes”  which tells the story of a lonely fisherman in an English Village named Peter Grimes. Grimes, portrayed by Isaiah Burkel, was previously found innocent of causing the death of his apprentice at sea. During a stormy night at the town pub, the townspeople, the full ensemble, drunkenly slosh around enjoying one another’s company, until Grimes walks in for a drink. A lyrical brawl ensues between Bob Boles, Jared Boese, at a strong note, and the remaining townsfolk decided the best way to calm their fears is to sing a fishing chantey. This was their statement piece and was well choreographed with song and expression that made the audience think they, too, were right there in the pub and sea.

The opera concluded in a cheers and champagne tribute to Verdi’s “La Traviata” with the ensemble ascending slowly up the stairs with smiling exchanges to the audience. The rejoicing to life ended with bows and standing ovation from the audience.