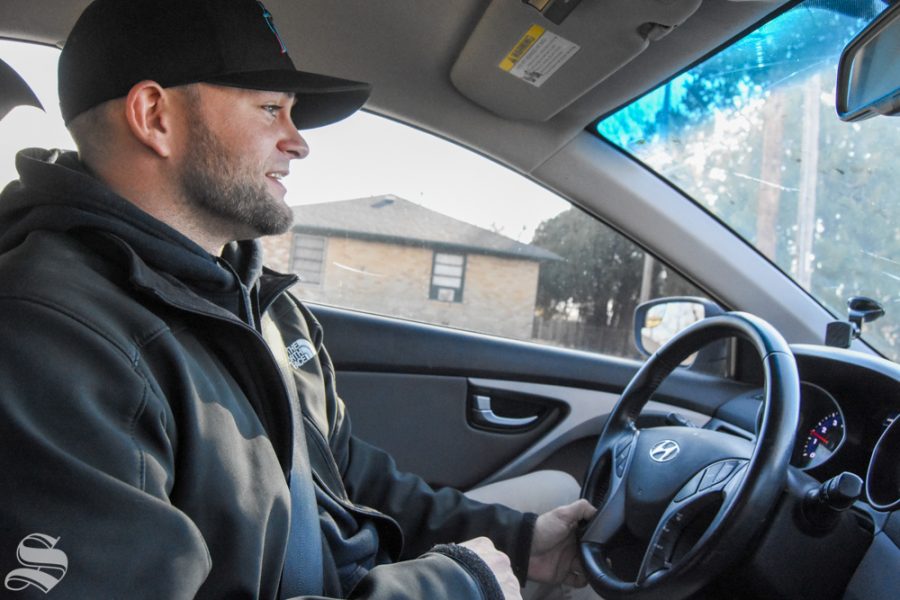 Graduate student Easton Herring answers questions during a drive-along interview with The Sunflower on Jan. 20.

With the swipe of a finger, you call for a ride and a driver pulls up in a matter of minutes, ready to take you to your next destination.

Wichita State grad student Easton Herring works as a driver for rideshare apps such as Uber and Lyft to earn extra money while attending college.

“It’s super flexible,” Herring said. “So anytime I would get out of class and have a few hours, I’d go do Lyft or Uber or whichever one, and run both the apps at the same time. It just kind of maximizes your rides, so I would get a call for Lyft and then I’d switch my Uber off.”

Herring was first introduced to rideshare while on a trip in Boston. The conversations he had with his drivers sparked his interest in working as a driver himself.

“I went to Boston three years ago and went and watched the Red Sox play and just talked to my Uber drivers and Lyft drivers while I was up there. They always have a different story,” Herring said. “So it’s really cool to, you know, get to sit and drive people and get to know about them, because everybody has a different story, so it’s super fun. It’s kind of an adrenaline rush because you don’t know who you’re picking up.”

Herring said he doesn’t just view the job as getting passengers from point A to point B — he enjoys the interactions and impacts he’s made through meeting strangers.

“I usually carry on pretty good conversation when we’re in the car. And people actually appreciate that,” Herring said. “Because you’ll have some people where they don’t want to talk to you at all, which I totally get. And then you have other people that just need somebody to talk to. I’ve had people cry in my backseat and ask if they could give me a hug just by just talking to them, which is nice, because you’re only in the car for five to 10 minutes together. So as long as I can make an impact on somebody that way, it means everything to me.”

Forging those personal connections makes the job fulfilling for Herring. In an effort to keep impacting people’s lives, Herring said he plans to pursue coaching in the future.

“I want to be a coach,” he said. “So I want to go out there and change people’s lives, whether that be, you know, in the baseball world, or them being husbands and fathers later on down the road. So, if I can just do that for one person a day and maybe they share that kindness or try to spread that a little bit more, and who knows what could happen after that?”