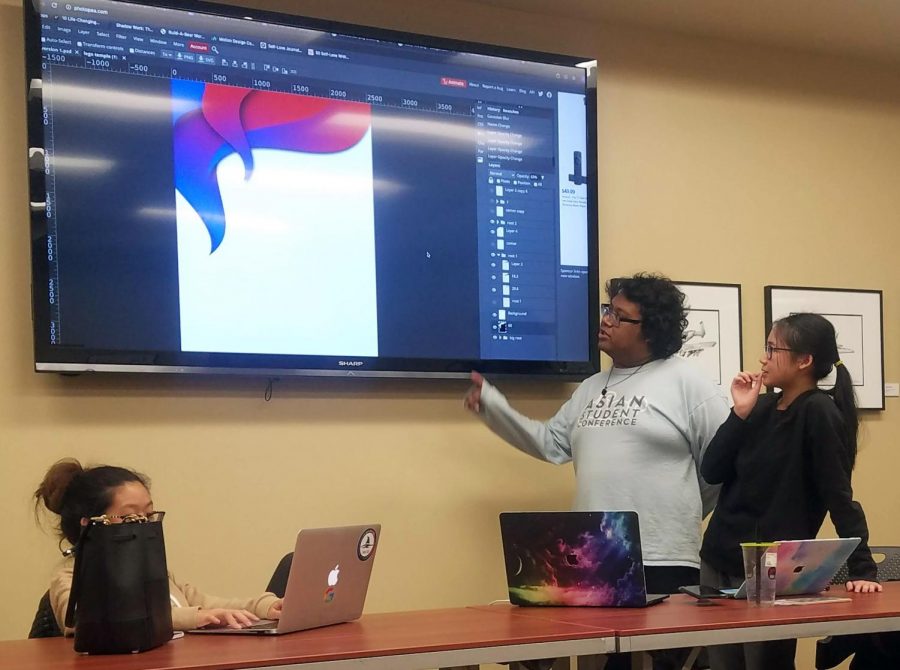 Richy Thach (left) and Tudsaley Vongsena (right) present the beginnings of a new design for the pageant’s sponsorship packet to the rest of the TLC committee.

With earphones in, Richy Thach enters room 258 of the Rhatigan Student Center singing audibly. Once inside, the director of the Miss Cambodia Wichita 2020 pageant exchanges greetings with other TLC members as they start to trickle in.

TLC stands for Thai, Laos, and Cambodian. It’s an association on campus that is open to community members.

While waiting, Thach opens Youtube and starts playing “Army of Two” from Netflix’s anime adaptation, “Carole and Tuesday.” The melody soon fills in the gaps of silence. As the song continues, another male member of the organization begins to sing along, leading a female member to ask what the show is about. Thach interjects and enthusiastically starts giving her a synopsis of the show.

TLC is hosting the first ever Miss Cambodia Wichita pageant this year on June 1 at 1 p.m. in the CAC Theatre.

“This is something completely new to me and to all of us,” Thach said.

During the meeting, they go over the agenda and split into groups. Thach’s responsibility is to keep everyone on track.

After feeling perpetually underrepresented in the WSU community and even the Wichita Asian community, Thatch and a handful of friends came together to create WSU TLC.

“So when we came together as a group, we [thought], ‘What is a long term goal of ours?’ And one of [the goals was] ‘Why don’t we throw a pageant?’ You know, Miss Latina has a pageant now, you have the Miss Black and Gold pageant, you have the Miss Vietnam pageant, Miss Laos pageant,” Thach said. “We could see ourselves doing a big event that is meaningful to a lot of people, especially to our community, since our community doesn’t have a resource like that — especially for younger women who are trying to get into higher education.”

They first thought of the idea to host a pageant in fall 2018, but it wasn’t until last fall that they began to take concrete steps towards the production.

“We’ve been prepping a lot last semester, and we are getting the ball rolling this semester. This was our first meeting of the semester and we have 16 weeks left. We are counting down the days,” Thach chuckled.

TLC decided to make the pageant more community-based than campus-based in order to get more people involved.

“We immediately thought about our community,” Thach said.

“We have other members who aren’t in school as well, and they are part of the organization. This is a way higher education folk can get a connection to the community and vice versa . . . I think this organization is a gateway for us to remember what our purpose is — to get into that community, to make an impact, to educate people on our culture, to let people know we aren’t just Asian — we are Thai, Lao; we are Cambodian,” he said.

Applications to be a contestant in the pageant opened on Feb. 1 and close on Feb. 22. At the time of this story, the eligibility requirements are as follows: contestants must be at least one-fourth Cambodian, a U.S. citizen or a permanent citizen, must reside in Wichita or within a 15-miles radius, not be pregnant or married, must have good physical and mental health, and must be able to meet the time commitment and job responsibilities that comes with competing in the pageant. The committee is hoping to accept five to 10 women.

“For those who are wishing to participate, they are making history,” Thach said. “They are not only doing something positive for themselves, but they are inspiring a whole new generation of people. I think it’s amazing that there are people from our community who are younger, trying to do things more culturally, trying to get people involved. We really want to focus on women empowerment, but at the same time, cultural empowerment too.”

A GPA minimum and being able to speak Cambodian do not factor into the requirements.

“Not everybody is perfect, so who are we to judge if something happened in their life and they are going through some circumstances and they have a low GPA,” Thach said.

In order to get some pointers, the pageant committee will be meeting with representatives from the Miss Vietnam Wichita pageant. The committee also attended this years Miss Black and Gold pageant, which is hosted by Alpha Phi Alpha Fraternity Inc. to “not only support, but to see what is something we can bite off of them and something that we can create on our own,’ Thach said.’

With hopes of strengthening community ties, the pageant committee will hold events throughout the semester that give community members an opportunity to meet and talk with contestants.

“We have to remember what our purpose is and what our goal is, and that is to educate,” Thach said. “For example, we can do a workshop and we can have any women from the community come in and we can talk about women empowerment and it can be partially led by the contestants.

“It’s giving [the contestants] something more meaningful to do with their time, while not only prepping for the pageant. It’s showing that this isn’t just a game to us . . . It’s not just about the title.”

Thach said TLC wants to invest in its pageant contestants.

“Not only are we here as a committee to give them a title and to give them [scholarship] money, but we are [also] here to help them succeed and to be able to put their dreams forward into the right direction and have them potentially even replace us in the future,” Thach said.