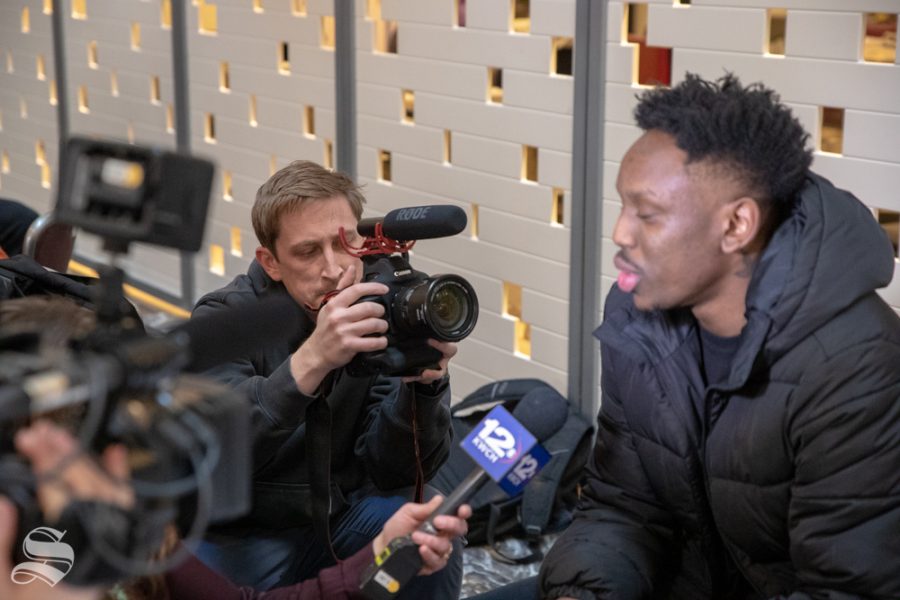 Wichita State videographer Marcus Wright follows closesly as senior Samajae Haynes-Jones is interviewed by a member of the media in the New York Marriott Marquis on April 1, 2019. (Photo by Joseph Barringhaus/The Sunflower).

Because of his original love for photography, Wichita State Digital Media Coordinator Marcus Wright didn’t originally picture himself as a videographer. Today, Wright is a member of the GoShockers athletics team, helping produce social media content that has ended up reaching thousands of viewers.

Wright graduated from Wichita State in 2015 with a degree in marketing communications. He was also a photographer for The Sunflower. After graduation, Wright decided to freelance for a year. That’s when the topic of video production first arose.

“At first, when I was doing photography — doing freelance stuff — I just noticed that there was a lot of opportunity for video,” Wright said. “I would reach out to people and let them know that I am a photographer and every once in awhile, they’d ask, ‘Do you know anyone that does video?’ So that kind of sparked my interest.”

With the video wheel turning his brain, Wright saw his first opportunity arise. After he bought his first “real camera,” a musician friend of his wanted a music video. Wright shot it, and he liked it. After shooting a few more, his work was uploaded to Facebook. Then more people started to ask for videos.

“That’s just kind of how I got into it,” Wright said. “After I graduated, I took pretty much a whole year just trying to do freelance work, and that was one way that I got involved with video.”

After taking the year of freelance, Wright decided it was time to get a “real job.” So he moved back to his hometown of Independence, Kansas, to take a job as an admissions representative for Independence Community College. While there, he helped kids, mainly student athletes, get enrolled in classes.

But his love was still photography, and he was growing to love video. That’s when he got the chance to shoot the 2017 hype video for the football team.

“I just asked if I could go out and shoot a practice one day,” Wright said. “I was like, I’m just going to turn this into a little hype video. I think I went out for three days and shot three different practices back-to-back and put all of the clips together. It actually came out really cool.”

“That was the first time that I was like, ‘Okay, I’m a lot better at sports video.’”

Wright continued to make some videos for the Pirates throughout the season while keeping up with his photo shoots. His aspirations were still in photography — videography was just a side project. Little did Wright know that his next step was going to be a big-league gig.

Sam Lutz is the photographer for the Kansas City Royals. As a fan of his team photography, Wright had been following Lutz on Instagram.

“I just asked myself, ‘I wonder if he did something similar to me,’” Wright said. “Where did he come from?”

With his curiosity high, Wright sent Lutz a message. After messaging and job search advising, Wright was led to a job title — a real-time correspondent. His first gig in the MLB came with the St. Louis Cardinals. He ended up spending two years with the Cardinals, also freelancing with the Houston Astros. But those jobs were just part time, so Wright kept up studio freelancing on the side.

His time with the team set him up with a photography company in St. Louis, helping produce advertising photography. But Wright had made a promise to his fiance. He promised that if a job ever opened up closer to home, he would take it. That’s when the digital media coordinator position at WSU became available.

“It worked out,” Wright said. “At the end of baseball season, this position opened up, and luckily, I had some connections from when I went to school here. I applied, I interviewed, and got the job, so that’s how it kind of got started.”

Wright’s first day on the job was not a normal one. With the men’s basketball team traveling to play in the Charleston Classic, Wright was thrown into the frey. After spending one day back in a Wichita hotel room, he was on a plane and flying to Washington D.C. the next morning.

Come March, Wright will have been in his position for 16 months, and he’s become a key member of the team that’s helping to bring the Shockers’ social media presence into the national spotlight. Wright said he’s enjoyed getting involved in social media communities for content creators.

“Back in the day, I was on Twitter, but I never really posted my Cardinals photos. I didn’t even realize that there was such a big sports creator community on Twitter,” Wright said. “It’s super cool because we’re all super supportive of each other. It’s just crazy to think that you put one cool little video out and you never know who will like and who will share it. It’s been fun.”

Even though video is now his job, Wright’s love for photography lives on. Whenever given the chance, Wright said he enjoys meshing the two together, and it showed with this season’s recap video from the Virginia Commonwealth game. Wright took video aspects and consecutive picture frames to replicate video movement, making sure no recap video looks the same.

“It just switches it up,” he said. “Like the human eye looks at those pictures differently. That’s why this one was my favorite. You can just tell it’s different. Just combining those two skills into one just made for a cool feature.”

At the end of the day, Wright said what he enjoys most about his job is the randomness. No day is exactly like another, which keeps him moving.

“That’s why I love it,” Wright said. “You’re always trying new things. You talk with your team and you just figure things out. I think that I would go crazy if it was always the same thing.

“We just have a lot of good people that work here in this department. With every day being different, we’re just trying to make this environment enjoyable. At the end of the day, I’m just glad to help with that.”