A Golden day in the life 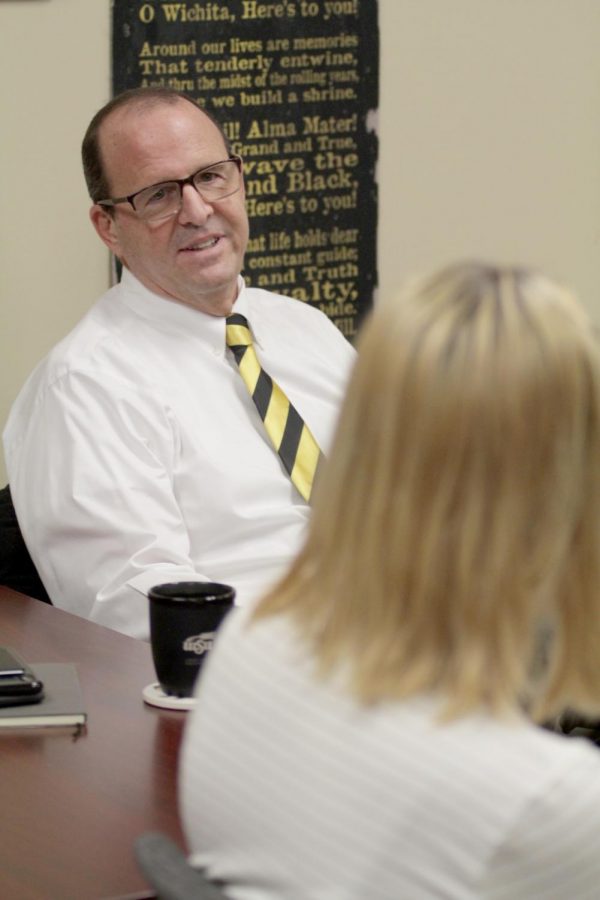 Being the new guy in town, University President Jay Golden’s first month in Wichita has been all about building relationships.

Which is a good thing, considering why he moved here.

“The people!” Golden said emphatically when asked why he moved to Wichita after complaining about Kansas’ irregular weather patterns.

And it’s clear that Golden is a people person. No one is ever a stranger when he’s around.

On the day of his interview with The Sunflower, Golden had two meet and greets with students – one in the Office of Diversity and Inclusion and another in the Student Government office.

He was already on a first-name basis with some students.

If someone he wasn’t already familiar with greeted him with, “President Golden,” he’d interrupt. “I go by Jay,” he’d say.

And Golden’s relationship building extends beyond students to faculty and staff.

On the day of his interview, Golden met with the campus police and physical plant representatives to discuss moving their workplaces. Later on, he visited Strategic Communications employees to go over changes that had been made to the university website.

Building these relationships with campus stakeholders is important, considering that Golden has emphasized shared governance and transparency since he was selected as Wichita State’s president in October.

“I know that you will all do a very good job of holding me to that. And that is fine. Feel free to call me out when I’m not helping us,” Golden said at a Faculty Senate meeting in January.

That same sentiment came up again at a recent town hall meeting with faculty and staff in the College of Liberal Arts and Sciences.

“Today’s my most fun opportunity because I’m so new I haven’t screwed up yet,” Golden said.

Outside of the university, Golden also has to build relationships with the community. He has bold plans for the area around campus not within the university’s jurisdiction.

Needless to say, WSU’s president is a busy man.