And you thought you were busy: Sophomore mayor of Geuda Springs embraces the ‘balancing act’ 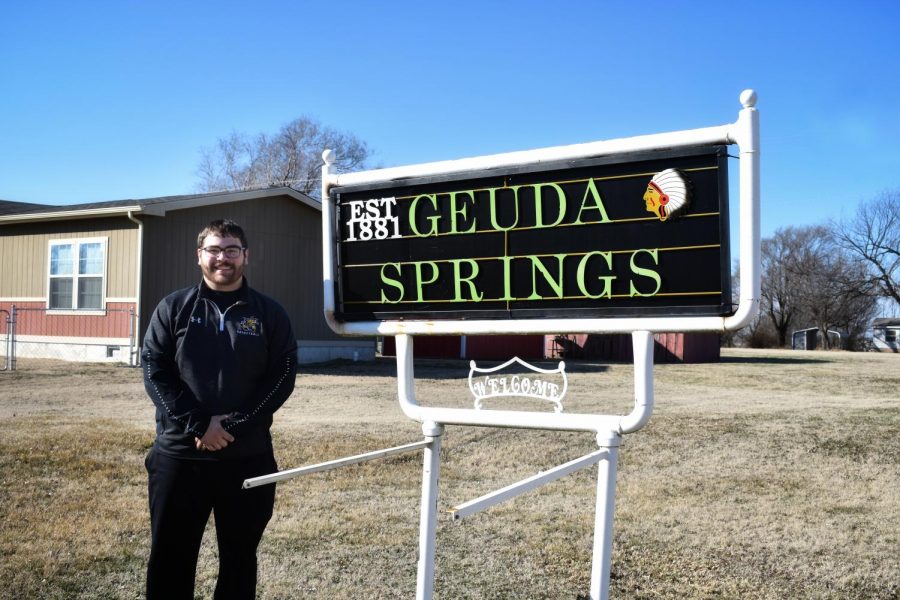 On Jan. 6, while most Wichita State students were busy giving up on their New Year’s resolutions, sophomore Neil Terry was taking his oath of office.

Most students visiting their hometown over winter break don’t do so to be sworn in as mayor. But Terry, elected at just 19 years old, is the exception.

Geuda Springs, a town of 185 people, is about a 50-minute drive from Wichita, where Terry lives and attends WSU.

“Because of basketball, I stay up here. It’s just a lot easier,” Terry said

He said that although his busy schedule is a “balancing act” between school, basketball, and Geuda Springs, he wouldn’t have it any other way. He likes to stay busy.

“A day in the life of Neil is, depending on classes and practice — if it’s practice first, then I’ll head down there to Geuda after,” Terry said.

Once in town, he takes time to hear from his constituents and catch up on the day’s news.

“Basically, I drive around town real slow, kind of look at everything and see who’s out and about — kind of converse with people. And then usually, I head up to the fire station because I’m on the volunteer fire department.”

He also serves on the board of his church as vice president, helping with community dinners and other outreach — you know, in his spare time. Finally, Terry heads home for the night.

“I’ll usually hang out with my grandma for a while, and that’s about my day — other than if there’s something major that happens,” he said.

And he knows that could happen on any given day. Terry said his professors understand that he’s always a phone call away from Geuda Springs.

But the young mayor said everything seems to be “falling in place” for him so far this semester.

“Right now, it’s smooth sailing for me,” he said.

“Can’t ask for anything better.”

Public service runs in Terry’s family. His father serves alongside him on the Geuda Springs City Council.

His mother, who died when Terry was 7, was the Geuda Springs city clerk. She was a driving force that helped shape the small community.

“It’s so weird to talk about because of how I’ve seen the town evolve — you know, my mom started it. She basically kick-started the revamping of Geuda Springs,” Terry said. “She got our festival going, she helped bring our museum from two cases in our city building to a whole building with all sorts of memorabilia.

“It’s shown me the passion in where you’re from. You know, be proud of where you come from and do the little things, really,” Terry said. “Like this whole (mayor) deal. It’s my time to serve.”

He said his high school history teacher was the first to encourage him to get into politics. He nicknamed Terry “governor.”

When a council member died, Terry was asked to consider taking on the role, but the time wasn’t right, he said.

“Then they approached me later that year and said, ‘Hey, would you be interested in being mayor?’ and I went, ‘Well, of course. I’m going to do anything for my town. If you need me to be mayor, I’ll be mayor,’” Terry said.

“I didn’t really have to campaign any. Everyone did it for me. They said, ‘Neil’s running for mayor,’ and everyone voted.”

Terry received 20 of the 29 write-in votes cast in the contest last November.

He said one of his goals as mayor is to address Geuda Springs’ aging infrastructure.

“We’ve got some infrastructure that needs to be repaired, and it’s going to cost us more than our pocketbook allows most of the time, so, we’re going to have to break it up,” Terry said.

He mulls over ideas while driving back and forth between Wichita and Geuda Springs. He also listens to podcasts to get “the wheels turning,” he said.

“It’s just my time to really sit down and think.”

Terry doesn’t want to be in politics forever, he said. He’s studying to be a high school science teacher.

“In my life, I’ve always wanted to help people,” Terry said. “I’ve always been a part of every group to do community service. I have this knack for helping people — and kids in particular, because I grew up without my mom. I’ve articulated that to kids that even if you don’t grow up with both parents or something tragic has happened in your life, it’s not hard if you have the passion and the spirit to do it. You can do anything with your life.”

Teaching will give Terry the opportunity to interact with and mentor kids every day.

And why is science his chosen discipline?

“Because I like it and I’m good at it,” Terry said.

He plans to stay in Kansas and teach in a small town — ideally at his alma mater, Oxford High.

For Terry, service is key. He sees a need in the community, and if he can do something to help, he steps up.

Remarkably, he’s on track to graduate college in four years.

“My goals are just to get ’er done and get out there and start teaching, because they need me,” Terry said.