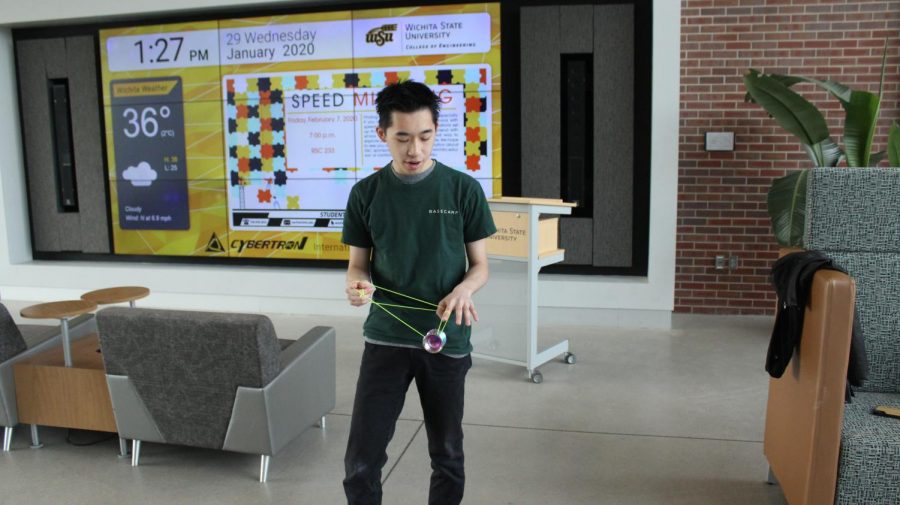 Julian Chee shows off the yo-yo skills that won him the 2017 and 2018 Malaysian Yo-Yo Championship.

A yo-yo may not be something you’ve given much thought to since you were a little kid. Like most kids, you might have played with it for a bit before getting bored or wrapping the string around it so tightly that it can’t be undone. But Julian Chee, a senior aerospace engineering student, never put down his yo-yo — well, not for too long anyway.

“In 2014, I saw this video of a Japanese kid, Kazuya Murata, and he was just like six years old and he’s just winging it on stage,” Chee said. “I saw that and my mind was blown, because I thought I could do tricks with [yo-yos], but I’ve never seen anything like it. Because yo-yoing has evolved for such a long-time, tricks have become much more complicated, so I thought, ‘I think I can do that.’”

Eventually, Chee would find himself standing on a similar stage to the one he saw Murata on, at the Asia-Pacific Yoyo Championship, but before that, he had to learn those tricks that blew his mind.

Chee said he first started learning through YouTube. Slowly mastering one new trick after another, building upon the foundation of each until he had something whole, he described the experience as “opening up a new section of a map.”

In two years, he advanced quickly.

“I think it’s because I am a very hands-on person, because both of my parents were music teachers, so I had to grow up playing musical instruments and stuff,” he said.

“When it came to this, I feel like it kind of came to me naturally.”

A year after picking his yo-yo back up, Chee entered his first tournament, a regional competition in Malaysia. He won second place.

He proceeded to win the 2017 and 2018 Malaysian Championship, going on to the Asia-Pacific Championship, and even as far as the world championship. His competitive yo-yoing has taken him everywhere from Singapore to Iceland and Shanghai to Cleveland.

At his first Asia-Pacific Championship, Chee placed 11th out of 20.

But being up on that yo-yo championship stage isn’t all it’s cracked up to be, he said.

“When you’re at home just practicing your stuff, you know, you can get it clean,” Chee said. “But once you go on stage, there’s so many other factors that you can’t recreate at home, like people watching and the fact that, you know, it’s a little harder to correct once you screw up.”

Chee has since moved to Wichita to work on his aerospace degree, finding time to compete in a few local and national competitions. But with this being his senior year, he hasn’t had as much time to devote to the yo-yo life recently.

For now, Chee’s goal is to get to the finals of the World Yo-yo championship — without being seeded to the semi-finals by a national competition.

“I’m kind of at the stage where I’m not really going to have time to do whatever I want anymore, so I feel like maybe this might be one of my last years that I’m able to go to the world yo-yo contest,” the yo-yo champion said. “So, my competing days might be over in maybe like the next one or two or three years — hopefully longer — but I will always be yo-yoing.”