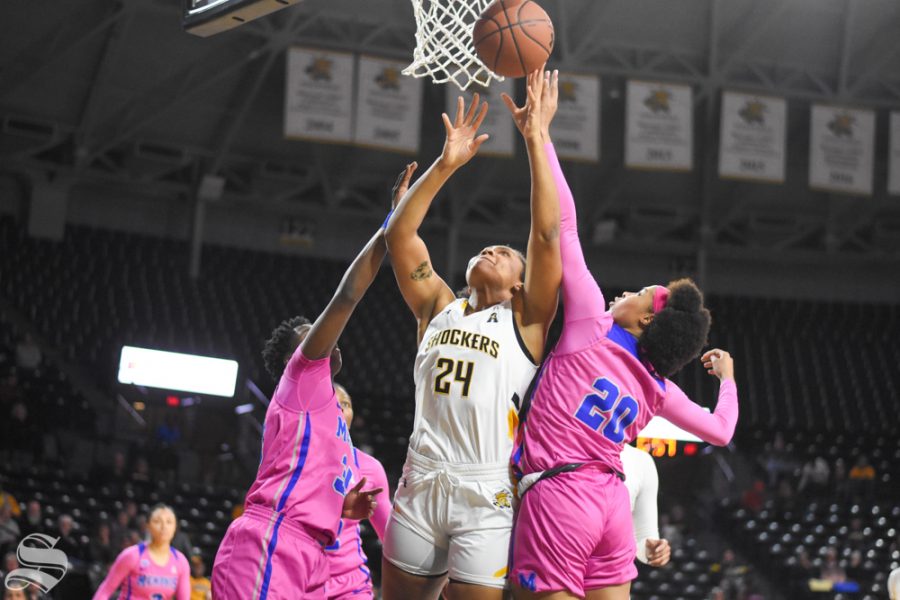 Wichita State sophomore Trajata Colbert goes up for a layup during the game against the Memphis Tigers on Wednesday.

Wichita State fell to Memphis 69-60 Wednesday. With the loss, the Shockers fell to 13-11 on the season and 5-6 in conference play.

The Shockers struggled out of the gates, leading to a 14-9 deficit at the end of the first quarter. However, WSU rebounded in the second quarter, shooting 8-16 from the field and making five field goal attempts in a row to knot the game up at 32 going into the locker room..

“Obviously, our offense struggled tonight,” Head Coach Keitha Adams said after the game. “We didn’t find our rhythm. I thought they (Memphis) did a pretty good job of mixing things up.”

Despite only bringing seven players to Wichita and missing leading scorer Jamirah Shutes, The Tigers proved to be a tough opponent. The Tigers were led by Dulcy Fankam-Menjiadeu, who scored 19 points and grabbed 12 rebounds.

“You’ve got to have a lot of respect for those guys, having seven players and coming in here and outplaying us today,” Adams said.

WSU’s leading scorer Mariah McCully led the Shockers with 17 points, followed by Shyia Smith with 13 and Carla Breamud with 10.

WSU resumes play on Sunday in New Orleans as they travel to take on the Tulane Green Wave. Tip is scheduled for 2 p.m.