A story to tell after 30 years of wrongful imprisonment 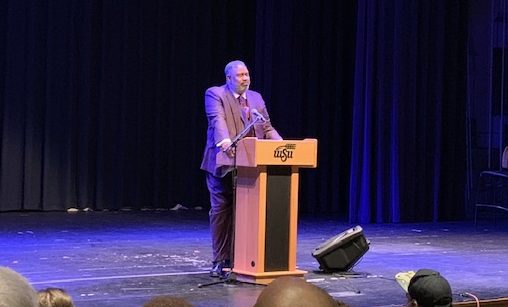 Anthony Ray Hinton was sentenced to death and spent 30 years in Alabama prison for two murders he did not commit. Hinton gave the Black History Month keynote lecture Thursday in the CAC Theater.

Correction: In an earlier version of this story, Bryan Stevenson was misidentified as Anthony Hinton’s previous lawyer from Boston.

Imagine spending 30 years of your life in prison for a capital crime you did not commit, knowing the people who put you behind bars could care less about your innocence. Well, Anthony Ray Hinton did just that, and he has a story to tell.

In 1985, Hinton was just 29 and lived with his mother in Alabama while working at a local supermarket. His life seemed calm and normal, until two Alabama state policemen showed up at his mother’s house with a warrant for his arrest. Hinton was charged with kidnapping and first-degree murder and was held in jail until his trial.

“The state of Alabama knew I was not the person who committed this crime,” Hinton said.

He said the arresting officer told him, “I don’t care if you did not do it. I’m going to make sure you’re found guilty of it.”

Though Hinton maintained his innocence and had a solid alibi, which was confirmed by his boss, he was put in jail without bail and forced to await trial.

After a year in jail, Hinton had his day in court, and he was charged with an additional homicide on top of the initial crime he didn’t commit. Although the only evidence was a statement claiming the bullets from the victims matched his mother’s gun, Hinton was found guilty by the all-white jury and sentenced to death by the judge.

Hinton said that during the first three years of his incarceration in solitary confinement, he did not speak to a single person — not even to his parents when they visited. Hinton said he made it through the years in prison by escaping into his mind.

“I couldn’t escape physically, but I decided to escape mentally,” he said.

During his meditative travels, Hinton said he visited Queen Elizabeth and her royal family, married Halle Berry, and then later divorced her for Sandra Bullock.

After a lawyer from Boston could only get Hinton life without parole for a crime he did not commit nor want to admit to, Hinton met Bryan Stevenson.

After more fighting, Stevenson hired three of the country’s top ballistics experts, who proved the bullets from the crime were not from Hinton’s gun. Stevenson’s team confronted the Alabama Attorney General with the authoritative evidence proving Hinton’s innocence, but he would not hear it, and passed it aside. Stevenson later took the evidence to 14 other judges in Alabama, and in an apparent conspiracy of animosity, none of the judges would hear the evidence.

Stevenson’s last effort to save Hinton’s life was to present the case to the U.S. Supreme Court. The court heard the case, and the nine judges voted unanimously to mandate a retrial in Alabama.

During that short trial, the authorities lost the original gun used in the murders. Then, when they found the said gun, they lost the bullets. After 30 years of incarceration on death row, Hinton was released on April 3, 2015.

Since his release, Hinton has traveled the country, sharing his story of life and forgiveness. Through his journeys, he has spoken at many universities, met with Oprah Winfrey, sang at Nelson Mandela’s honorary 100th birthday, and even met Queen Elizabeth. Hinton even wrote a book: “The Sun Does Shine: How I Found Life and Freedom on Death Row.”

“You’re free if you can forgive,” Hinton compassionately exclaimed to the audience.

As for the officers who stole his freedom 30 years, Hinton said he has forgiven them, and that he “truly believes they’ll answer before God” for their actions.

“We all deserve love,” Hinton said.

“You can see the outside, but you can’t see the inside of someone’s self.”

Hinton’s story and humble statements moved the audience to a standing ovation for several minutes afterwards. Hinton closed his lectureship with these questions: “What would you do if you were waiting all your life to die, and finally one day, you were set free? Ask yourself: Who would you be?”