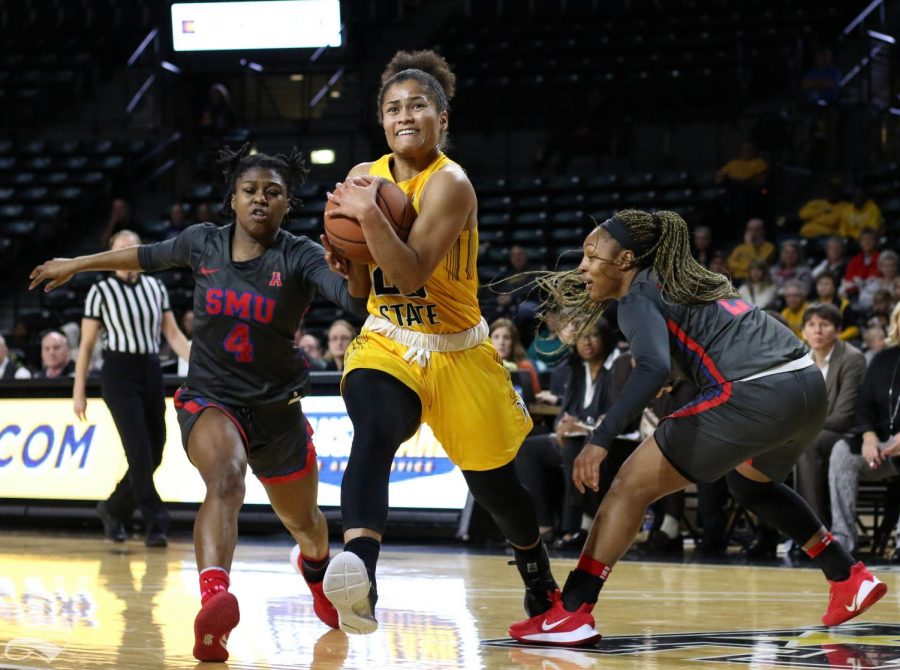 Wichita State's Seraphine Bastin breaks past Southern Methodist's defense during the second half of the game at Charles Koch Arena on Wednesday, Feb. 19, 2020.

Wichita State women’s basketball lost a tight contest to SMU 72-67 Wednesday evening. With the loss, the Shockers fell to 14-12 on the season and 6-7 in conference play.

Despite the Mustangs shooting 9-15 in the second quarter, The Shockers cut the deficit to 38-31 entering halftime, thanks in part to shooting 12-14 from the free throw line.

In the second half, Wichita State came out strong, outscoring SMU 28-14 in the third quarter to take a 59-52 lead. Carla Bremaud led the Shockers in the quarter with nine points and three three-pointers. However, the Mustangs mounted a comeback and controlled the fourth quarter, highlighted by a 9-0 run to finish the game.

WSU lost the rebounding battle to SMU 38-33. Rebounding is a strength for the Mustangs, as they rank eighth nationally in offensive rebounding with 16.3 a game.

“They (SMU) beat a lot of people on the boards, and we fell a little short on that,” Head Coach Keitha Adams said after the game.

The Shockers were led offensively by Mariah McCully with 19 points and Carla Bremaud with 14. Bremaud had a strong night from three-point range, shooting 4-8. SMU was led in scoring by Amber Bacon with 17 points.

After halftime adjustments, WSU shot 12-18 from the field and three of five from three-point range in the third quarter to pull ahead of the Mustangs.

“We talked about moving and cutting more. When we passed the ball into the post, we had cutters going,” Adams said.

WSU and SMU’s second matchup was decidedly closer than the Shockers’ 64-44 loss on Jan. 29 in Dallas. However, the result was still disappointing.

“Neither one of them are good results. It’s not the result we want,” Adams said. “It’s about getting it done.”

The Shockers will be back in action Sunday as they head to Tulsa for a showdown with the Tulsa Golden Hurricane. Tip is scheduled for 2 p.m.