‘You’re forced to make a decision’: Here’s why Jaime Echenique is a problem for opposing teams 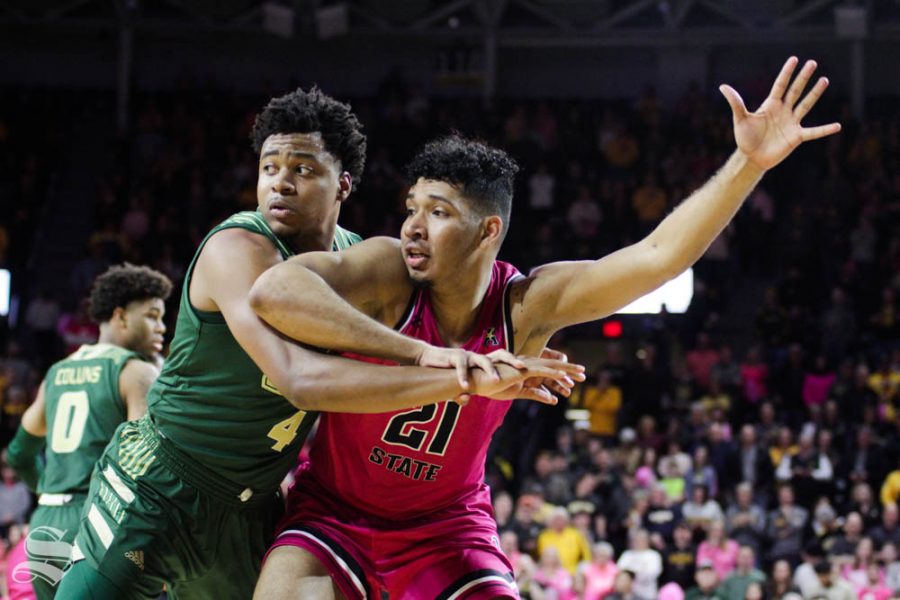 Wichita State senior Jaime Echenique calls for a pass during the second half of the game against USF on Feb. 20 inside Charles Koch Arena.

Without a doubt, the game of basketball has changed in the last decade. With the change, the traditional post player has seemingly disappeared. Players that resemble or model their game after some of the all-time greats, such as Tim Duncan, Shaquille O’Neal, or even recent all-stars like Lamarcus Aldridge, are hard to find in college basketball. Most teams’ tendencies nowadays are to shoot the ball from the perimeter and utilize the three-point line.

But that’s just most teams.

Wichita State isn’t like most teams. Even with the evolution of the game in the last decade, Head Coach Gregg Marshall seems to be dedicated to a traditional style of play. And he’s made it work with guys like Garrett Stutz and Shaq Morris. Now, he’s making it work with Jaime Echenique — someone who looks up to  those greats.

“I’ve been hearing all my life that I kind of look like Tim Duncan and also today I look up to LaMarcus Aldridge,” Echenique said. “I love the way they move and how they play. The system that they play in is very similar to the system we use so those are the players that I always look at.”

Marshall’s gameplan to pound the ball into the post showed on Thursday in the Shockers’ win against South Florida. Echenique finished with a game-high 20 points on 50% shooting to go along with nine rebounds. All of his points either came from inside the paint or from the free throw line.

Gregory isn’t the only coach that Echenique has scratching his head. The senior from Colombia has been a hassle for pretty much every conference team, as he’s averaging 12.3 points, 7.2 rebounds, and 1.6 blocks per conference game. He’s also being used on just under a fourth of the Shockers’ possessions in AAC play (24.5%), according to KenPom.

“They go to him. There’s not a lot of teams out there anymore that have a consistent and steady diet of throwing it to the post and Wichita State is one of those teams,” Gregory said.

Echenique’s dominant game on Thursday was a different kind of dominant though. At times, the post struggled to put the ball in the basket at the rim. But his ability to draw fouls is what caused the Bulls so many issues. on the night, he made 12 of the season-high 14 free throws he shot.

Echenique credits his traditional style of play to where he came from. He said that being an international player helped him rely on the fundamentals growing up. He relishes being the “old school” guy on the court, but he also understands that stretching the floor is important in today’s game.

“I’ve been the old-school post guy, the guy who can stay in through the paint, but also, I’ve been working on my game to kind of go outside and maybe shoot threes or drive to the paint,” Echenique said.

The center has shown that he can step out and hit threes on occasion throughout the season. Something else that he’s improved on is his ability to drive the basketball from the perimeter into the paint. Earlier in the year against Oklahoma State, Echenique pumped faked a three, drove into the lane, and slammed the basketball through the hoop with authority. On Thursday, there was an almost identical play. He pump faked, drove past his defender, and saw a cutting Jamarius Burton. He dished the ball to Burton, who dunked. That’s just a glimpse of how dangerous Echenique can be.

Freshman Tyson Etienne said he’s grateful to have Echenique on his side.

“I’m new to college basketball and I never played with a big man like Jaime,” Etienne said. “Some of the moves that you see him make in a game and some of the moves you may see him making in practice make you go, ‘Wow, that’s really good.’ He’s a great player.

“Everybody says the traditional five-man is going away, but you know, Jamie’s going to find his niche because he wants to get better all the time.”

Echenique is a key cog in the Shockers’ offensive game plan. With defenses so keen on stopping him in the paint, that opens up shooters on the perimeter. Even though WSU didn’t capitalize on the open three-point attempts Echenique helped make on Thursday (6-22), they’ve shown that they do have the ability to knock down those type of shots. And it’s that one-two punch that keeps opposing teams guessing and makes Echenique such a formidable force in the interior.

“When you just have a guy to demand a double team like that, and just passing the ball and sharing it, it makes the defense just guess,” Burton said. “So when you put both of those two things together, it’s just a luxury to have.”