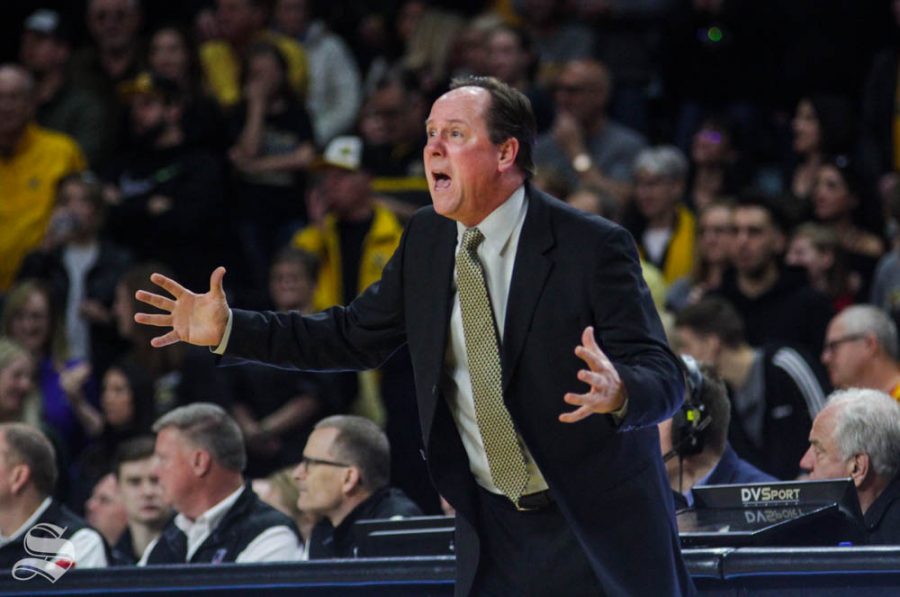 Wichita State Head Coach Gregg Marshall yells towards his players during the first half of the game against Tulane on Feb. 16 inside Charles Koch Arena.

With 21 seconds remaining, Wichita State was down a mere two points on the road. Momentum was slowly shifting in their favor after a missed shot from Cincinnati.

The Shockers were finally getting an inside game going and the team was even shooting above 80% from the free throw line. After Javelin Cumberland missed a three-pointer, the Shockers went the other way down the floor.

Sophomore guard Jamarius Burton brought the ball into the half court with 31 seconds left in the game, and 23 seconds left on the shot clock, Burton passed the ball to Erik Stevenson. Stevenson was the last Shocker to touch the ball on that possession.

He dribbled away time at the top of the key. When the clock hit 26 seconds, Stevenson started waving his teammates off. And when the clock hit 21.3 — 13 seconds on the shot clock — the Washington native hoisted a questionable three-pointer that clanged off the back iron.

Jarron Cumberland grabbed the rebound for the Bearcats and was fouled.

Before Stevenson shot that three, he was 4-13 from the field and 1-7 from deep.

Cumberland made both free throws to stretch it to a four-point game with 16 seconds left, but not all hope was lost for WSU.

Tyson Etienne hit a three to cut the deficit to one point with nine seconds left, but a turnover from Stevenson with three seconds left sealed the loss for the Shockers. They would lose 67-64.

Individually, Stevenson recorded the most points for the Shockers, scoring 13. But a team-high five turnovers slowed him down, as did his game-high minus-9 plus-minus rating. Burton (11) and Jaime Echenique (10) were the only other double-digit scorers.

Cumberland scored a game-high 24 points for Cincinnati and was their only scorer in double-figures. He went 16-22 from the charity stripe, out-attempting the Shocker team total.

The loss drops WSU into a three-way tie for fourth place in the American Athletic Conference standings with Southern Methodist and Memphis. It also drops the team back into the NCAA Tournament bubble conversation as they are now just 2-4 in Quadrant I games. They have one Quad I game left against Memphis on March 5.

WSU still sits in the top 50 of the NET rankings and top 40 in RPI, but a No. 83 strength of schedule could hurt the team on Selection Sunday. The team does have a 6-3 record in Quadrant II games, with a chance to bolster their resume and finish at 9-3 by the end of the season if they win out.

The Shockers return to action Thursday against Temple inside Charles Koch Arena. Tip is scheduled for 7 p.m.

The Owls currently have the edge over the Shockers in the season series after winning in Philadelphia earlier this season, 65-53. KenPom gives WSU an 82% chance of taking down Temple and projects a 10-point victory for the Shockers.

The game against the Owls is a Quad III matchup, which means a loss would look even worse on Selection Sunday.