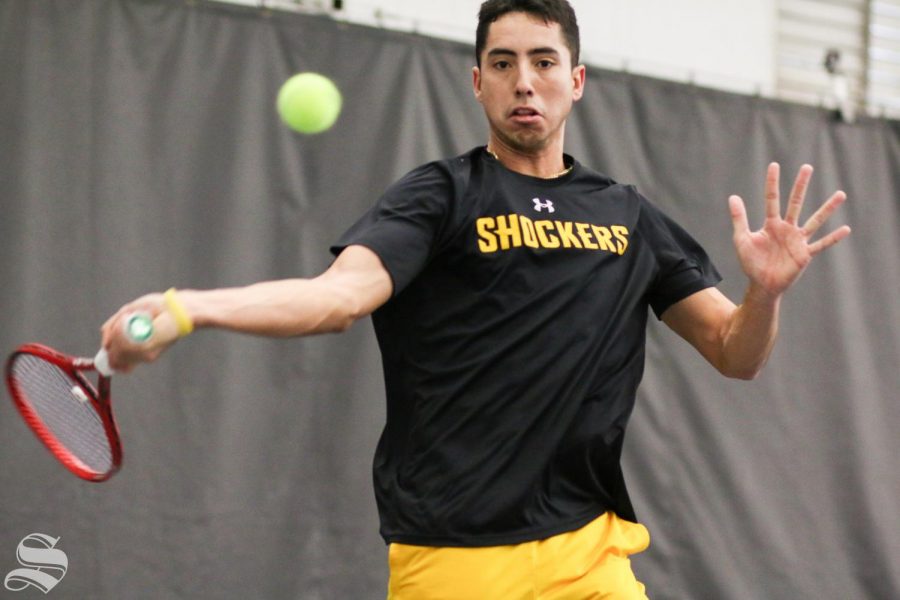 Wichita State senior Murkel Dellien volleys the ball back to UTA during the match held at Genesis Health Club on Friday, Feb. 21, 2020.

The No. 47 nationally ranked Wichita State men’s tennis team pulled off a 4-2 win against UT Arlington on Friday after a grueling three-hour match.

After dropping the doubles point, the Shockers, had only one team win from Murkel Dellien and Marius Frosa (6-3) and were going into singles matches down by one.

The match slowed down after that, becoming a fight for every point after a loss in the No. 2 singles spot. No. 5 and No. 6 each went to a third set for Frosa and freshman Benjamin Niv, respectively.

Niv was the star of the night, but it didn’t come easy. After winning the first set 6-2, he dropped the second, 6-7. Then he found himself down 1-5 in the final set.

“I got a bit tired in the second set, and had to work through it when I was down and found a way and got rewarded for that,” Niv said after his match.

He ultimately rallied to win the match 7-5 and close the night out for WSU.

This win puts the Shockers’ record at 10-4. The Shockers will hit the road against Fresno State next weekend.