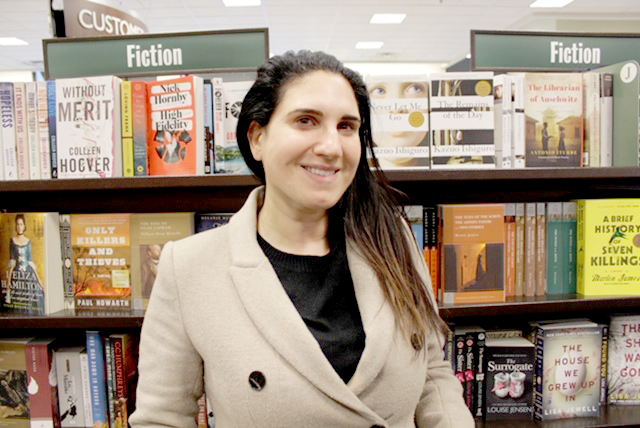 Local author, Sarah Houssayni, wrote “Wasted Salt” to provide readers a new perspective on immigration and the interconnectedness of humanity.

In 2018, Wichita-based author Sarah Houssayni wrote a narrative of what it’s like to be a female immigrant in her book, “Wasted Salt.” Houssayni’s story is unique in that she, like her character, Zahra, is originally from Lebanon.

Houssayni first began writing in the fourth grade, and she hasn’t stopped. She learned French and English in school, but mainly wrote her stories in French.

Houssayni was 24 when she was forced to leave her country, which was on the brink of war. She immigrated to America, where she published her first novel, “Fireworks” in 2015.

Houssayni currently lives in Wichita with her family.

She said that when she first got the idea for “Wasted Salt,” she wrote the entire manuscript in three weeks, then spent “years” revising.

The novel is a fictionalized narrative of two immigrant women trying to find their way in America. The two main characters, Zahra, a Lebanese refugee sponsored by a Baptist church in Wichita, and Noor, an Egyptian American, are both empathized constructions of characters Houssayni knew in real life.

“All the stories that are in both of my novels are actually stories that either the person has told me or stories from our community,” Houssayni said. “The thing I would take away from their stories was the human story, so that is where my characters come from.”

In the novel, Zahra and Noor are roommates in a musty basement bedroom, and even though they stand out from the people they find themselves interacting with, community members try their best to coexist with them.

“Even when there’s discriminatory remarks in the text, the characters are doing it with good intentions,” Houssayni said.

Even though Zahra is on her own journey of self-discovery, away from organized religion, the Baptist church that sponsors her does so in a kind manner.

“Not everyone wants to be saved,” Houssayni said, and Zahra’s character reflects that attitude.

Noor, on the contrary, is a web cam model who still follows her Muslim faith and honors Ramadan with respect.

“Everything I talk about, I have lived through with real people,” Sarah said. “I don’t think the world needs me to write another novel, but for me, I want people to not be able to help themselves to become kinder, and by hearing these people’s journeys, I couldn’t help but get a bigger heart.

“So, my intention with writing this novel was to get people to become more empathetic with those who are very different from them. My hope is for people to read it and become kinder and for the reader to root for people who they would not normally root for.”

The theme of “Wasted Salt” is one of humanity. Many of the characters are born in situations that they could not avoid, and the characters embrace it rather than abandon it.

“You are a human as you are, not as how anyone wants you to be,” Houssayni said.

The novel’s title has deep roots in Arabic culture.

The characters remind themselves not to waste each other’s salt throughout the novel. The metaphor also encourages readers not to waste their valuable human life away with trivial tasks.

“At times, we give away a thing that is most precious,” Houssayni said. “Wasting salt is like wasting life.”

Houssayni’s characters do not undergo any conscious effort to change their lives; rather, they survive their life and become a version of themselves they can be at peace with.

“Everyone changes, but without intentionally trying to change. Their life makes them a different person,” Houssayni said. “They realize their humanity is loved in different ways.”

“Wasted Salt” provides readers with a vision that will alter their perception of the realities of immigration that affect millions of people who simply desire a new life with opportunity.

“There is so much crisis around the issue of immigration in this country, and it is important for people to understand what it is like to walk in the shoes of an immigrant,” Houssayni said. “To me, it is good for a reader to read the story of my characters, because through their journey, even though it is a journey the reader may never have, it shows you what the human heart is capable of through difference of character.”

Houssayni’s dedication to humanity extends to the LGBTQ community. All of the proceeds of the novel will be donated to The Pride Study, a study dedicated to better understanding how being LGBTQ influences physical, mental, and social health.

“I don’t want people to shut themselves away from the development of the LGBTQ community or of the immigration process,” Houssayni said. “Any time you are deprived from humans around you, you will stop growing.”

This growth Houssayni speaks of is found in the heart, and she says it’s in everyone — even people we recognize as being different from ourselves.

“Our interconnectedness is our eternality,” Houssayni said, and her goal with this novel is to connect readers to the consciousness she says humanity has always been a part of.

Houssayni is both a mother and a pediatrician, but she still makes time to write and inspire her readers to see that interconnectedness beyond themselves.

Houssayni’s guidance to young, emerging writers is to find their individuality.

“It doesn’t matter what anyone thinks of your story — write it anyway,” she said. “You’re going to write it because you’ll believe you have to get the story out.”

“Wasted Salt” was published in January, and is currently for sale at Watermark Books & Café, where Houssayni will be reading and signing copies Sunday, March 8 at 1 p.m.