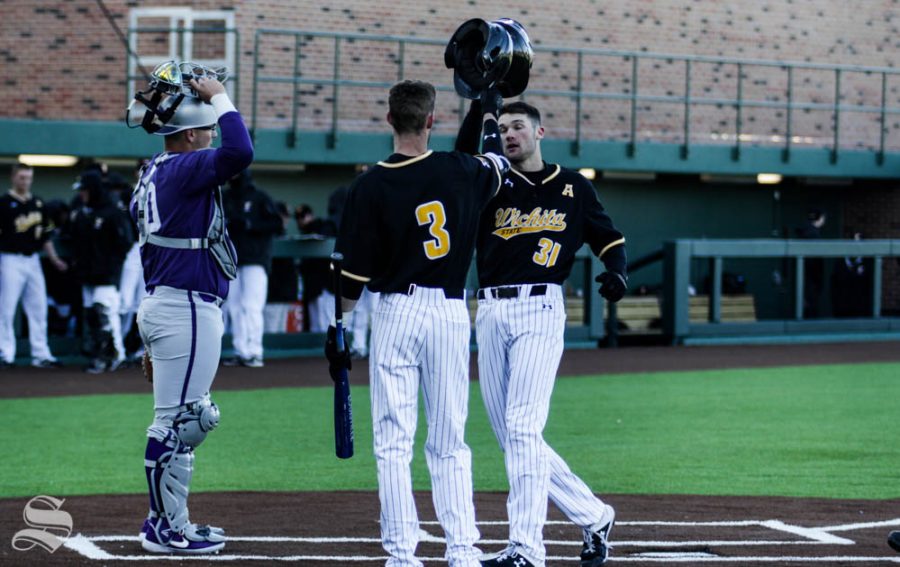 Wichita State freshman Cade Clemons celebrates after hitting a home run during the third inning of the game against Kansas State on Feb. 26 at Eck Stadium.

Against Arkansas-Pine Bluff on Tuesday, freshman Cade Clemons delivered a walkoff single in the bottom of the ninth for the 2-1 win. The Shockers made the most of their pitching depth, as four pitchers combined to give up just one unearned run.

Against in-state rival Kansas State on Wednesday, Clemons blasted his second career home run in the third inning to put the Shockers on the board. Hunter Gibson’s RBI single in the sixth extended the lead to two.

The Wildcats cut the deficit to one run, but were unable to come back as WSU secured a second-straight 2-1 win.

Pitching has been key for the Shockers so far this season. Connor Oliver and Tommy got their first starts of the season on Tuesday and Wednesday, respectively.

So far this season, WSU’s staff ranks No. 17 in the country in strikeouts per nine innings with 12.1. WSU logged 12 Ks against K-State.

Head Coach Eric Wedge was appreciative of Barnhouse’s performance, as the senior struck out nine batters in 5 2/3 innings.

“That was a great effort by Tommy Barnhouse today. He hasn’t pitched in quite a while,” Wedge said. “Went out there and set the tone early, made some adjustments when he needed to, and made pitches when he needed to make pitches.”

Wedge said WSU has stuck to its pitching game plan so far this season.

With Todd Butler at the helm, the coaching staff called pitches. Wedge has a different style, though, as he allows Ross Cadena to control the game and manage the tempo from behind the plate.

So far, this strategy has paid off, but not without some bumps in the road as the pitching staff and Cadena learn the new process.

“Time will tell. Tempo is an important thing for us,” Wedge said. “That’s why we have Ross (Cadena) calling pitches for us back there and the pitchers taking responsibility and teaming up with Ross back there with regard to calling a baseball game. There’s been teaching moments every single game with that, but fewer than I would have thought.”

On the offensive side of things, Clemons has been impressive for WSU. Although he got off to a slow start in the first few games of his freshman campaign, he has turned it on as off late, hitting two home runs and a walk-off single in the five-game homestand.

Wedge said he’s been impressed with the freshman’s eagerness to step up to the plate.

“Cade most definitely wants to be up at home plate in those key situations.”

Wedge said his young team needs to stay focused on improving every day.

“Well, it doesn’t stop. We’re still pushing forward,” Wedge said after Wednesday’s game. “Every day is about development. Every day is about getting better and these young men driving confidence from that. I want them to enjoy this tonight. This was a good win against a good team.”

The Shockers will be back in action this weekend in the Nevada Tournament. Their first game will be Friday at 1 p.m. against Hofstra.