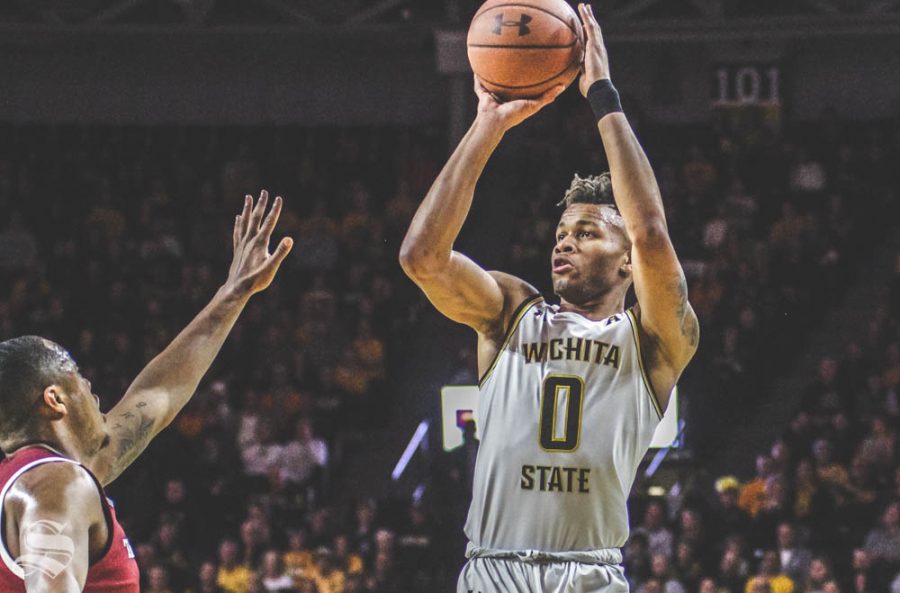 Wichita State sophomore Dexter Dennis shoots a three-pointer during the first half of the game against Temple on Feb. 27 inside Charles Koch Arena.

Wichita State was dead in the water. Southern Methodist couldn’t miss from the field, the Shockers were turning the ball over, and Gregg Marshall was even calling timeouts.

WSU was down 13 points at halftime and the start of the second half was no better. The Mustangs went on a 13-2 run and WSU didn’t score their first bucket of the half until the 16:44 mark. Marshall called a time out down 24 points.

That’s when he made the necessary switch to a zone defense, immediately causing SMU to go from red hot to ice cold. Then the Shockers went on their own run.

WSU ended the game on a 40-12 run over the last 14 minutes. Sophomore guard Dexter Dennis was the lone Shocker to provide offensive consistency throughout, scoring a career-high 25 points and knocking down a career-high seven three pointers. His three-pointer with 32.1 seconds left in the game was the dagger for the Shockers.

“It’s just kind of who I am. When you do something good, you kind of just expect it,” Dennis said after the game on the KNSS radio broadcast. “So, it’s not really like a shock. I can be really hard on myself, so it was good to see it pay off today.”

“Sports are just an amazing vehicle that demonstrate the power of character, having faith, and having belief,” Marshall said after the game. “We showed none of that in the first 25 minutes. Dexter Dennis started knocking down some shots and then it became contagious.

“I don’t know how we won that game, but we did and it feels great.”

Freshman point guard Grant Sherfield was the only other Shocker to notch double figures on the afternoon, tallying 14 points on 50% shooting off the bench. He also grabbed two rebounds and dished out six assists.

“Grant Sherfield did a wonderful job of getting into gaps and spoon-feeding Dexter Dennis wide open threes,” Marshall said. “He’s getting better off of the bounce. Today, he looked like a point guard, and that’s what we’ve been wanting him to look like.”

SMU was led by Isiaha Mike, who scored 23 points and grabbed four rebounds.

The win against SMU keeps the Shockers as one of the last four teams into the NCAA Tournament, according to ESPN’s lead Bracketology expert, Joe Lunardi. A loss would’ve likely popped them completely off of the bubble. The Shockers are joined by Houston and Cincinnati as the only teams from the AAC projected to make the big dance.

Up next, the Shockers will travel to Memphis to take on the Tigers Thursday inside FedEx Forum. Tip is scheduled for 8 p.m., and the game will be broadcasted on ESPN.

“It wasn’t looking good for the ’ol Shockers there for awhile, but we turned it around,” Marshall said. “There are basketball gods. You know, it was a little payback day.”