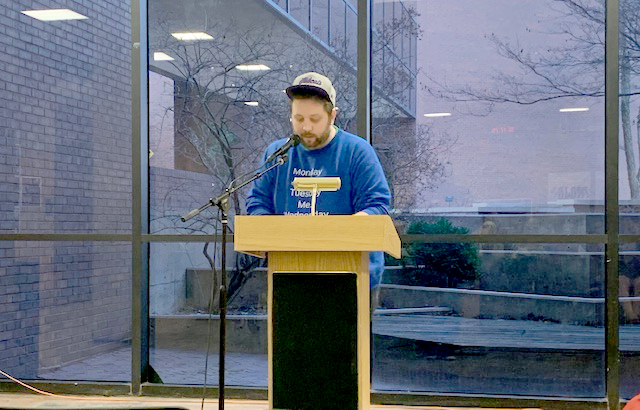 The event began with an address from Sydney Martin and Becca Yenser, this year’s co-editors in chief, who, along with 12 other editors, crafted an edition infused with many talented verbal artists.

This journal’s staff is a special one indeed, as they have reached out to the community to give their literary support. The staff has donated more than 500 books to the WSU community and hosted four Mikrobrews events.

As for their future work, Mikrokosmos staff is developing a podcast to feature writers, developing writing workshops for area schools, and working with University Libraries to secure Mikrokosmos’s history in the library’s Special Collections.

This edition features 10 writers connected with WSU as either students, staff, or alumni, as well as three artists from WSU and the surrounding community.

The edition also includes the contest winners for poetry and fiction, as judged by nationally esteemed writers Sam Sax and Amy Hempel, respectively.

Ashton Pacholski, a WSU alumnus and local English teacher, read his story, “Elsewhere, by the Rodeo.” Pacholski’s book, “Seasons,” was released in February and is available for purchase.

Issues of Mikrokosmos are free for students and can be picked up on the sixth floor of Lindquist hall. Copies can also be requested via email at [email protected]