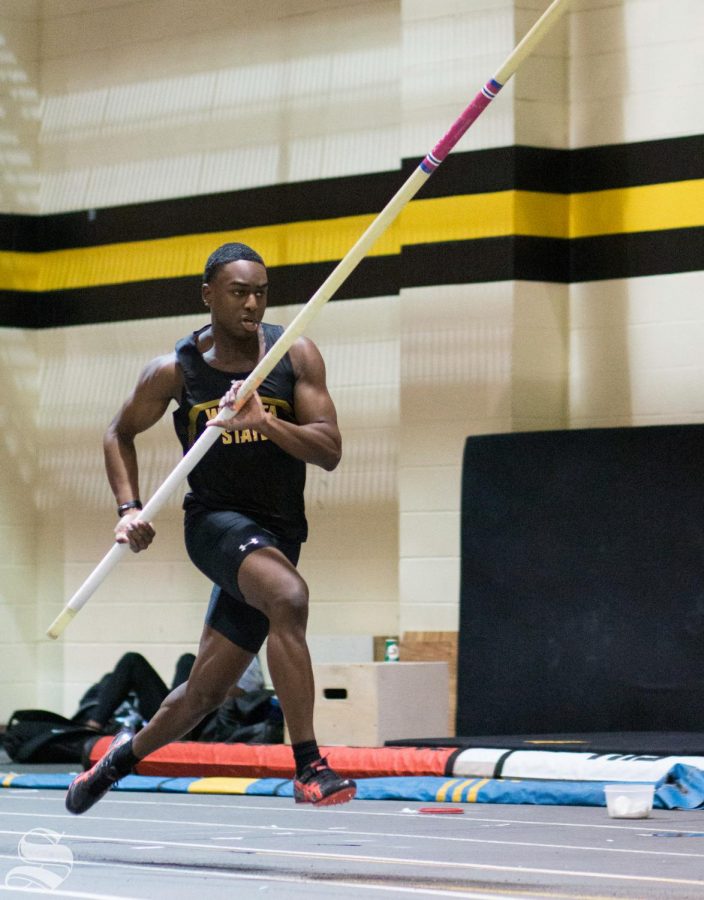 Wichita State junior Grant Downes competes in pole vault during the WSU Invitational at the Heskett Center on Friday, Jan. 31, 2020.

Here’s how both teams fared in the meet:

On the women’s side, WSU tallied 59 total points on the way to the fifth-place finish. Houston took home the team title.

Senior Rebekah Topham was a bright spot for the team, earning her second-consecutive Most Valuable Performer award after winning two events and amassing 21 points on her own. Topham defended her title in the mile competition with a time of 4:51.24. She also pulled away from SMU’s Hannah Miller in the last 400 meters of the 3,000-meter to win with a time of 9:30.46.

The men’s team also totaled 59 points en route to a fifth-place finish. Houston dominated, setting a meet record with 179 points as they swept both divisions.

Junior Adam Gauzy led the charge for the WSU men, setting a school record in the 400 meters. Gauzy finished with a time of 47.52, beating the previous record by 0.39 seconds. Gauzy’s time was good enough for fourth in the event.

WSU also had some success in the 60-meter hurdles, as sophomores Joseph Holthusen and Antonio Norman both finished in the top four. Holthusen took second, earning all-conference honors, and Norman was close behind in fourth.

Junior Weston Lewis was the only other Shocker to earn all-conference honors, as he secured third place in the high jump. Lewis cleared 2.12m/6-11.50, a personal best and the sixth-best performance in school history.

Head Coach Steve Rainbolt said he was disappointed with the overall results but proud of individual performances put on by some of his athletes.

“This meet was a rough meet for us,” Rainbolt said in a statement to GoShockers. “We consistently battle for very high finishes at team conference championships, and today we were fifth on both sides. We weren’t in a position to battle for a high finish. This is an extremely tough conference, but we had a lot of good things happen.

“There were certainly several performances from our athletes that I was proud of.”

No WSU athletes qualified for the NCAA Indoor National Championships, which concludes the indoor season. The outdoor season will get going with the Emporia Twilight from March 19-21.