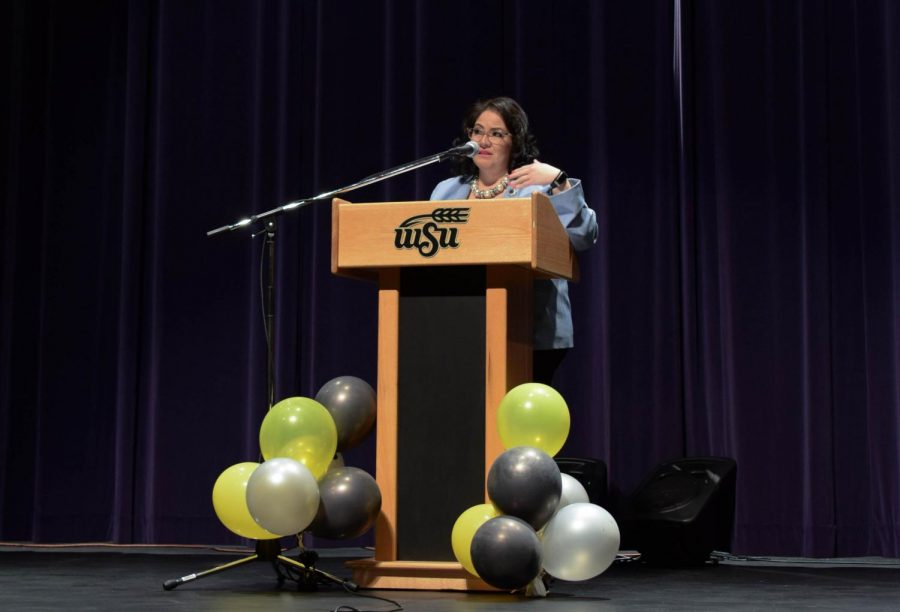 Kansas Secretary of Labor Delia Garcia shares her story and answers questions Thursday at the CAC Theater for Women in the Workplace.

Kansas Secretary of Labor Delia Garcia visited Wichita State Thursday evening to give the Fearlessly Female keynote speech as part of the Women in the Workplace events held on campus last week.

The event was sponsored by the WSU Student Government Association to help celebrate Women’s History Month.

Garcia spoke about how she got where she is and gave advice to those looking to follow in her footsteps. The themes of her talk included mentorship and possibilities. Early in her speech, she drew listeners’ attention by talking about discomfort and the role it has played in her successes.

“If you don’t hear anything else I say today, I want you to hear this: I want you to feel comfortable with feeling uncomfortable,” Garcia said. “That’s sort of the resonating kind of feeling I’ve had in my career in general.”

Garcia holds a Bachelor of Arts from WSU and a Master’s degree in political science with an emphasis in public administration from St. Mary’s University in San Antonio.

Now 42 years old, Garcia is running a state agency. She said people often ask her what that means.

Each governor in the United State has one secretary of labor. Of those 50, 17 are women, and only two are Latina women, Garcia said.

“For me, servant leadership has been the love of my life,” Garcia said. “And it’s something I take very seriously.”

When Garcia was 26 years old, she got a call about an open seat in the Kansas House of Representatives. She was pursuing her master’s degree in Texas.

Garcia said she was studying for her finals when she took the call. She said she listened to the pitch about why she should run, but she politely declined at first because she was one semester away from graduating. She said she didn’t think she had time to take it on.

“Unfortunately, there’s a scary statistic out there. It takes women to be asked five to seven times to run for any political office and women of color seven to nine times,” Garcia said. “So yes, I was a statistic.”

In May, when Garcia returned home to Wichita for Mother’s Day, the Democratic Party asked her to join them for a meeting. The party asked her again if she would run. Garcia said they told her to go back to Texas and finish her degree – she only had two classes left. But they wanted her to run.

“I was doubting myself,” she said. “I thought, ‘People won’t vote for me. I’m so young, and you know, Democrat in a conservative state and Latina.’”

But Garcia said she realized that if she didn’t run, she would always wonder “what if?” So, after a family meeting, she decided to do it.

After talking to her university about the opportunity, Garcia decided to both launch a campaign and finish her coursework. She was able to use her campaign as an internship to fulfill her final course requirement.

“I remember the dean saying, ‘Yes, you can do this. You can use your internship as your campaign. You can either get an A or an F.’”

Garcia got an A after winning the campaign. She graduated in August 2004, and a week later, she was elected to the Kansas House of Representatives.

Garcia held her seat for six years, serving on the Commerce and Labor Committee at her request. Garcia made Kansas history by becoming the first Latina and the youngest female to serve in the Kansas legislature.

Then last year, she got a call from Kansas Gov. Laura Kelly.

“She was calling me to come back home to run the State Department of Labor,” Garcia said. “When she asked, of course I said yes. And when I hung up, I’m like, ‘What the heck did I just do?’”

Garcia had just bought a house in Washington, D.C. She hadn’t planned on returning to Kansas in the near future. She said she was scared — especially about the mortgage on the house — but she took the leap and is still figuring out the rest.

“Again, it was that time of being comfortable with being uncomfortable,” Garcia said.

Now she leads the Kansas Department of Labor, which works with employers and employees in the state — what Garcia called “the backbone of our state and the Kansas economy.” She said her department works to make sure they have harmonious conversations between employers and unions. It assists workers in recovering unpaid wages, conducts safety concerns, holds presentations for businesses, aids workers who are injured on the job, and guides employers with accurate labor market information.

Garcia said that people who want to follow in her footsteps should build “a cabinet of mentors” — people who can help provide career advice, help with networking, and generally be there for you throughout your career.

Then Garci mentioned a newly developed internship opportunity that WSU students qualify for.

“We have started the Kansas Department of Labor Office of the Secretary internship, and guess what? It’s paid,” she said.

“I really am grateful to the experiences I had on this campus and really want to offer that to you all, and one way I want to do that is through our internship that we just launched three weeks ago,” she said.