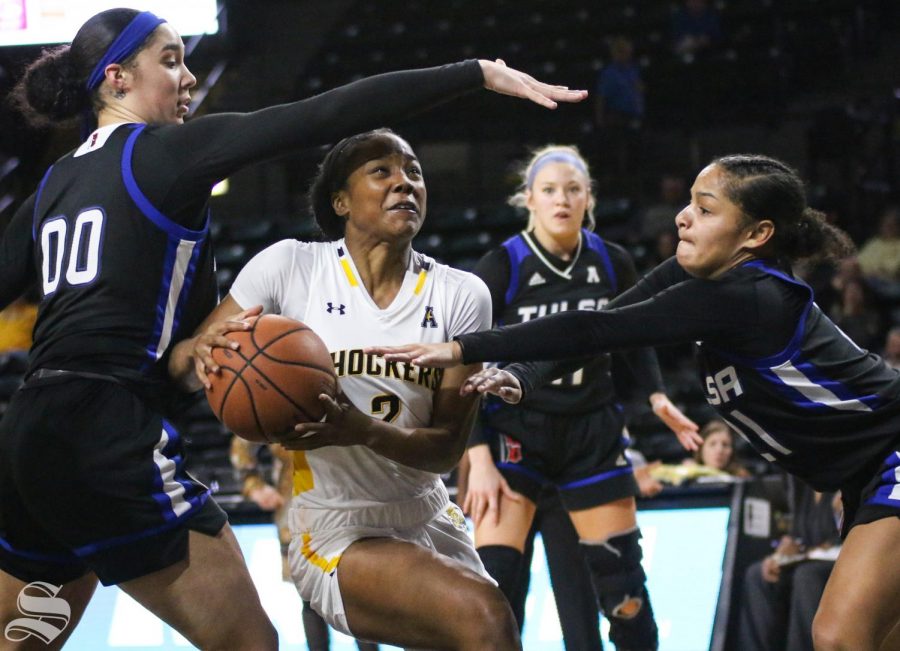 Wichita State's Mariah McCully drives toward the basket during the game against Tulsa at Charles Koch Arena on Wednesday, Jan. 15, 2020.

Wichita State women’s basketball’s Mariah McCully was announced to the Third Team All-American Conference on Friday. The junior made her mark in her debut season in Wichita, leading the team in scoring with 12.6 points per game.

McCully also made an impact on the defensive end, leading the team with 2.2 steals per game.

The Grand Rapids, Michigan, native came to WSU from Wabash Valley College in Mount Carmel, Illinois. She sat out last season and missed the first two games of this season.

Upon her insertion into the lineup, McCully immediately asserted herself. She lead the team with 12 points against Southern on her Nov. 17 debut. Senior Ashley Reid said the team struggled offensively before McCully’s arrival.

McCully showed great consistency throughout the year, including a 17 game streak of scoring in double figures. Her season was highlighted by a 25-point performance against Eastern Michigan on Dec. 7.

Head Coach Keitha Adams has been impressed by McCully but said she believes she has even more potential.

“I think that the best is still yet to come,” Adams said. “She’s a lot more comfortable now then she was early on.”