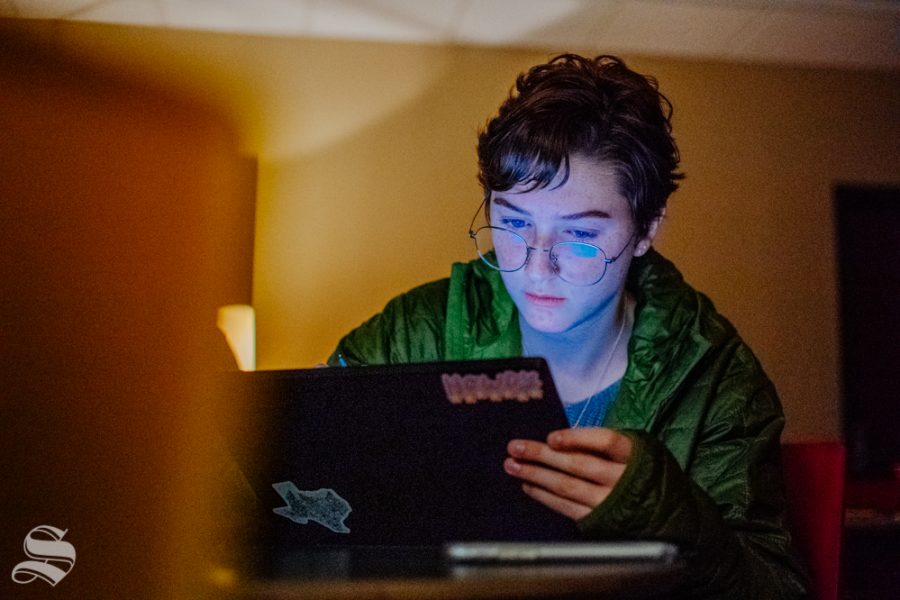 Daria Moore, a freshman studying biological sciences and graphic design, draws using a laptop during the LGBT self-care event on Thursday, Nov. 7 at the Office of Diversity and Inclusion.

Wichita State is canceling all in-person classes and related assignments next week and converting to online-only classes for at least two weeks after spring break. The university announced the protective measure Thursday in response to the looming COVID-19 pandemic.

Online classes will proceed as normal next week and in-person classes will convert to online starting Monday, March 30. Campus will remain open while classes are suspended, but WSU is encouraging students living on campus to go home if they can.

Golden said that after two weeks, the university will reevaluate whether classes should start meeting in-person again or remain online-only.

“I pray that it’s only two weeks. I cannot commit to our campus that it’s going to be just two weeks. None of us know,” Golden said.

He said canceling in-person classes for the remainder of the semester is not out of the question.

The cancellation does not apply to WSU Tech students, according to a university press release.

“WSU Tech will continue communicating to their community and keep me appraised of their actions,” Golden wrote in the release.

He said students who can go home over the break are encouraged to do so, but no one will be forced to leave campus.

“Those who cannot go home, our dormitories will remain open. We will have food service in our dorms,” Golden said.

The president acknowledged that not all classes can easily be shifted online and said the down week will be used to determine how those classes should proceed.

“There are some classes which are labs or clinicals. And so, the faculty and their department chairs are going to be working through those and communicating during that down week,” Golden said. “Okay, there’s a lab. We’re going to continue with the lab after spring break or we’re going to do something else in regard to that.

“I understand there are many personal and logistical challenges that happen with measures like this,” Golden wrote in the release. “Please take care of yourself and your friends and colleagues during this time.”

He said the university has purchased 200 Chromebooks to loan to students and 200 laptops to loan to faculty and staff who don’t have the technology necessary to access online classes. Interim Chief Information Officer David Miller said the devices, which are currently being shipped, will cost the university a combined $94,000.

Golden said there is no planned interruption to work hours for employees, including student employees on campus.

According to the release, students on domestic clinical rotations, internships, practicums, and other applied learning experiences, should contact their WSU coordinator for further guidance.

For the time being, all campus events with more than 150 people will be prohibited. Earlier Thursday, the American Athletic Conference suspended all spring sports indefinitely.

Golden said all university-sponsored international travel has been discontinued and domestic travel is being discouraged.

On Wednesday evening, the Kansas Board of Regents held a conference call where it was determined that each university president should choose how their school responds to the pandemic.

“Because geography and circumstances are different, these decisions are weighty ones that must prioritize health on campuses, while also taking into account the academic success of students and possible consequences for students with limited financial resources,” Regents Chair Shane Bangerter said in a KBOR press release.

The University of Kansas and Kansas State have both suspended all in-person classes until March 23, when they will be converted to online-only. Both universities are currently on spring break.

Golden said he hopes that people who think the cancellation is an overreaction are right.

He said he was personally “heartbroken” to discourage students from spending time on campus.

“It’s so nice out. The (tulip) bulbs are about to go and students are outside and active,” Golden said.

“This is going to be like, the best time for the next month or two, and that’s going to be taken away from all of us.”