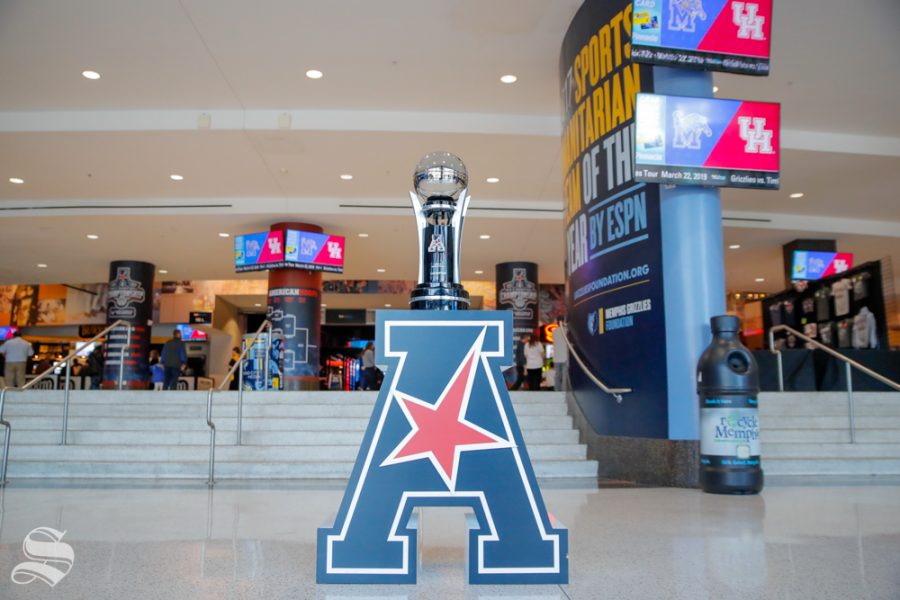 The American Athletic Conference tournement trophy sits in the concourse of the FedExForum before Wichita State's semifinal game against Cincinnati on March 16, 2019 in Memphis, Tennessee. (Photo by Joseph Barringhaus / The Sunflower.)

UPDATE: The NCAA has announced the cancellation of March Madness and all remaining winter and spring sports.

The American Athletic Conference is suspending all spring sports indefinitely.

The announcement comes after the conference canceled the conference tournament in Fort Worth earlier that day. Athletic directors and school officials were notified around noon regarding the vote – the same time AAC commissioner Mike Aresco addressed the media about the tournament in Texas.

“The decision to suspend competition was made after consultation with member institutions as part of a continued effort to mitigate the spread of the COVID-19 virus and to protect student athletes, coaches, institutional and event staff, media and spectators,” a statement by the conference reads.

“That’s [athletics] been a moving target for the last 24 hours,” Golden said. “We had made plans to continue athletics but without fans, but that is a moot point right now.”

The AAC joins the Big 12 and the Ivy League as conferences cancelling all spring sports.