OPINION: We deserve the right to talk to athletes during the pandemic 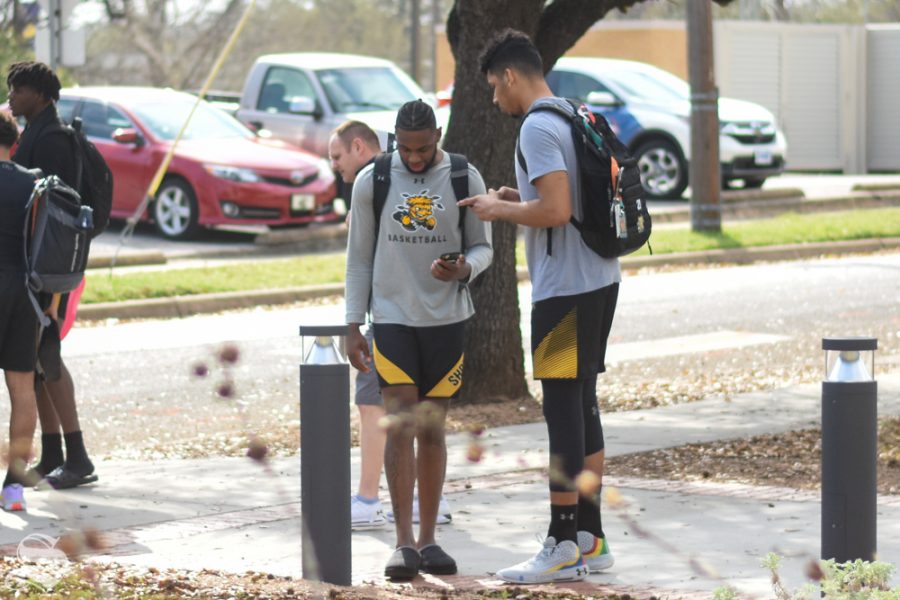 Senior Jaime Echenique and sophomore Jamarius Burton wait to load the bus outside of Texas Wesleyan after hearing the news of the AAC Tournament cancellation on Thursday, March 12.

“At this time we are not conducting interviews.”

It’s the response I’ve gotten. Since the abrupt end of the winter and spring sports seasons, I’ve been reaching out to sports information directors at Wichita State to try and tell the student-athletes’ and coaches’ stories. At this time, I am not getting clearance to do so.

I understand that this is a situation that’s never been handled before, but WSU needs to open the players and coaches up for comment. They all have stories that the public deserves to read about — and there are plenty of examples.

The world needs to hear from the Shocker softball team because their season was shut down before they could even play a home game.

They need to hear the story about Gregg Marshall’s initial reactions to the cancellation of the American Athletic Conference Tournament — he was not made available for comment after the decision — as well as his reaction to the slew of players who have opted for the transfer portal since the season abruptly ended.

The WSU baseball team saw their season get cut short amidst their 12-game winning streak. They have seniors on that team as well. There’s plenty of more examples too.

But they are not conducting interviews at this time.

You can’t even look at it the other way either. One may say, “Oh, well there’s always next year to tell these stories.” But that’s not known. Yes, there’s talk of spring sport athletes receiving an extra year of eligibility from the NCAA, but they may not come back. These student athletes are graduating and preparing to move on to their lives in the workforce. Others, like junior pitcher Jake Hamilton, have professional aspirations.

To keep it short, these teams won’t be the same. There is no next year.

As journalists, it’s our job to shine light on the issues the public want and need to know about. These are stories that need to be heard. This is something that’s never been handled before.

We deserve the right to talk to athletes — and coaches — during this pandemic. They deserve to have their stories told.