‘They all got “me, me, me” egos’: Markis McDuffie doesn’t think transfers are leaving because of internal issues 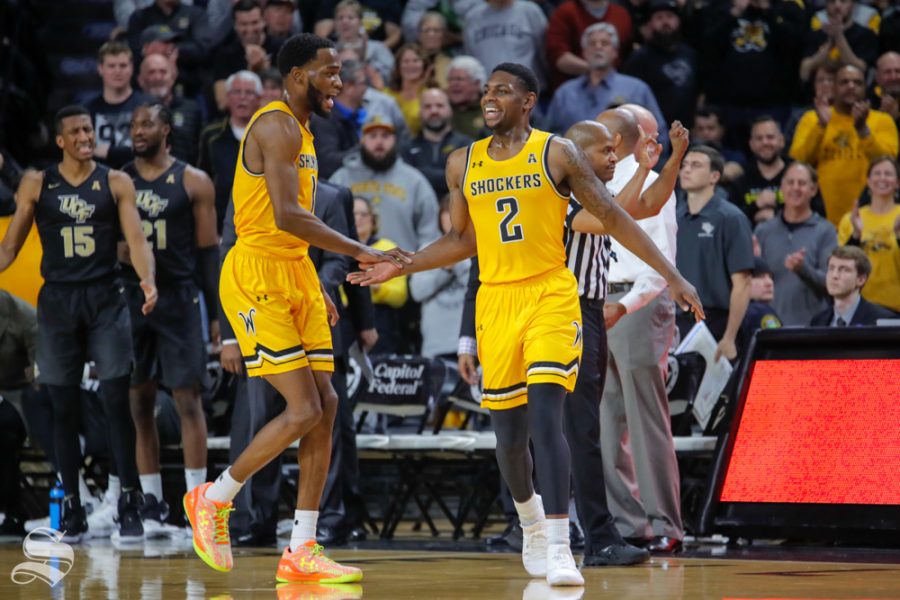 Wichita State freshman Jamarius Burton cheers with senior Markis McDuffie after drawing a foul towards the end of the first half. WSU played UCF on Jan. 16, 2019 at Charles Koch Arena.

This story has been updated for clarification. More quotes have been added.

Former Wichita State forward Markis McDuffie saw pretty much everything during his time as a Shocker. He saw success, NCAA Tournament appearances, and a total team rebuild.

A year ago, the Shockers surged down the stretch before losing in the National Invitational Tournament semifinals. At the time, McDuffie was optimistic about the future of WSU’s young team.

Now, WSU’s squad for next season will be almost completely unrecognizable to McDuffie. Just three scholarship players from his senior year – Asbjørn Midtgaard, Dexter Dennis, and Isaiah Poor Bear-Chandler – are left on the roster.

With mass departures becoming an annual occurrence, fans have taken to social media to try and figure out what is going on inside of the program. Erik Stevenson, who announced his transfer plans last week, told The Wichita Eagle that he and Head Coach Gregg Marshall had a contentious relationship at times.

When The Sunflower reached out to Stevenson, he refused to comment.

“They all young. So they all got, you know, they all got ‘me, me, me’ egos,” McDuffie said. “I still think they had a good season, but when you put two and two together – them (sophomores) and the recruits – it’s going to be tough. All them guys coming back trying to prove themselves.”

“You put those young guys together that’s one year apart, it’s going to be tough. Everyone’s going to want to be the best they can be, so it happens. It’s just basketball.”

McDuffie’s take was colored by his own experience as a Shocker. He admitted that he had a similar mentality at times throughout his career – a thought to transfer – but stuck with the team due to the leadership of the team’s juniors and seniors.

“Even coming into my freshman year, I danced with that (transferring),” McDuffie said. “I thought about that, but, you know, I wasn’t even close to getting to that bar to even keep on thinking about that because of the guys that I had on my team. And how much they motivated me.”

This year’s Shocker team had just one senior.

McDuffie said not having a go-to guy in crunch time also could have played factor for WSU down the stretch. Last year, it was no secret that McDuffie or fellow senior Samajae Haynes-Jones would get the ball in crunch time.

This season, there was no certainty. Each player thought they had a case to take the last shot. Egos collided and feelings were hurt.

It got to the point where players were visibly bickering on the court.

This power struggle was apparent after a 33-point loss to Houston in early February – the worst loss by point margin Marshall has suffered since coming to Wichita. WSU players were so out of sync with each other that Marshall kept them in the locker room for the entirety of the slotted halftime time. He didn’t even let them leave time for warmups.

In practice the next day – a day they were originally scheduled to have off – Marshall wanted the air cleared. The team ran and ran until people started to talk. Echenique was the first to speak up, but others struggled to follow, earning more sprints.

In the end, the Shockers lost seven out of their last 15 games, almost completely flipping the script on last season.

Even though McDuffie has a theory for the mass exodus, he said he was still taken aback to see so many players leave the program at once.

“I mean, it was a shock obviously,” McDuffie said. “These were the guys. I mean that’s pretty much what I can say.”