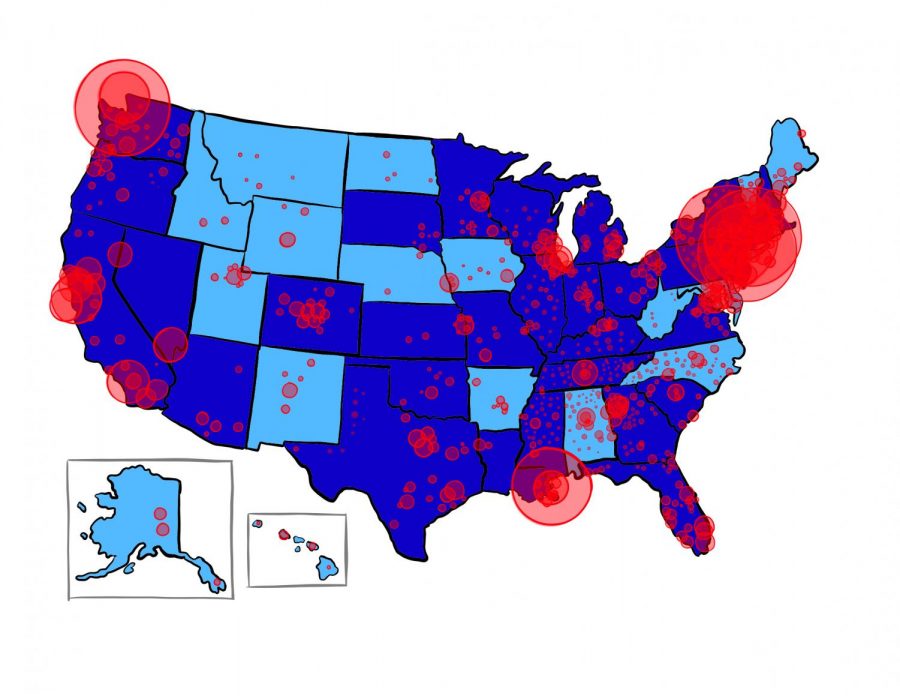 The United States now has the third-highest number of confirmed COVID-19 cases out of 177 countries and territories as of Sunday morning.

The U.S. surpassed Spain overnight Saturday in confirmed cases. As of Friday, the U.S. was number five. The rapidity of this jump underlines the urgency of our situation.

The number of known cases of the virus in America hit 15,000 on Friday morning as testing expanded and the infection spread.

As of Sunday afternoon, at least 31,772 people across every state, Washington, D.C., and three U.S. territories, have tested positive for the virus, according to a New York Times database. The Times report that at least 400 patients with the virus have died.

American lockdowns grew Saturday as New Jersey joined the list of states issuing a stay-at-home order, bringing the number of people in mandated isolation to more than 80 million nationwide, according to NBC’s Live Coronavirus Blog.

New York cases comprise about 40% of the national total, according to CDC records. New York officials said the number of available hospital beds in the state would need to double to 100,000 and get an additional 25,000 ventilators to provide care for those afflicted in coming weeks.

N.Y. State authorities said they expect near 80 percent of New Yorkers to be infected with COVID-19 at some point.

Meanwhile, Kentucky Senator Rand Paul tested positive for the virus. He is the first U.S. senator and third member of Congress to test positive.

President Donald Trump announced Friday that travel is being restricted along the 2,000-mile border between the U.S. and Mexico. Trade and workers can continue crossing, but most travelers, including migrants, will now be stopped.

Trump said the measure was necessary to slow the spread of Covid-19 across North America and “reduce the mass global migration that would badly deplete the health care resources needed for our people.”

On Saturday, U.S. officials declared that efforts towards developing a rapid coronavirus test have succeeded. The test has a 45-minute detection time, California-based molecular diagnostics company Cepheid said on Saturday.

In a statement, Cepheid said it had received emergency-use authorization from the U.S. Food and Drug Administration (FDA) for the test, which will be used primarily in hospitals and emergency rooms. It plans to begin shipping them to hospitals next week.

Kansas, stuck in the middle

Kansas has been insulated thus far from the pandemic compared to the coasts, but Kansas health officials reported a second COVID-19 death Saturday in Johnson County. It now reports 55 confirmed cases.

In Jackson, Johnson, and Wyandotte counties, a stay-at-home order will go into effect at 12:01 a.m. on Tuesday and remain in place until April 24 unless amended.

In Sedgwick County, officials report that a second resident is positive for COVID-19. They are currently in home isolation. The patient is a male under the age of 60.

Concerns about the spread of the virus moving from the coasts inland are disturbing.

Secretary of the Kansas Department of Health and Environment Lee Norman said last week that the state runs up to 100-200 test kits daily but could run out by the end of the day (last Friday). Norman said two semi-truckloads of supplies, such as masks, arrived in Kansas on Thursday, and that those supplies would be distributed to counties that need them.

On Saturday afternoon, Norman tweeted that the state did have enough kits to meet current demands.