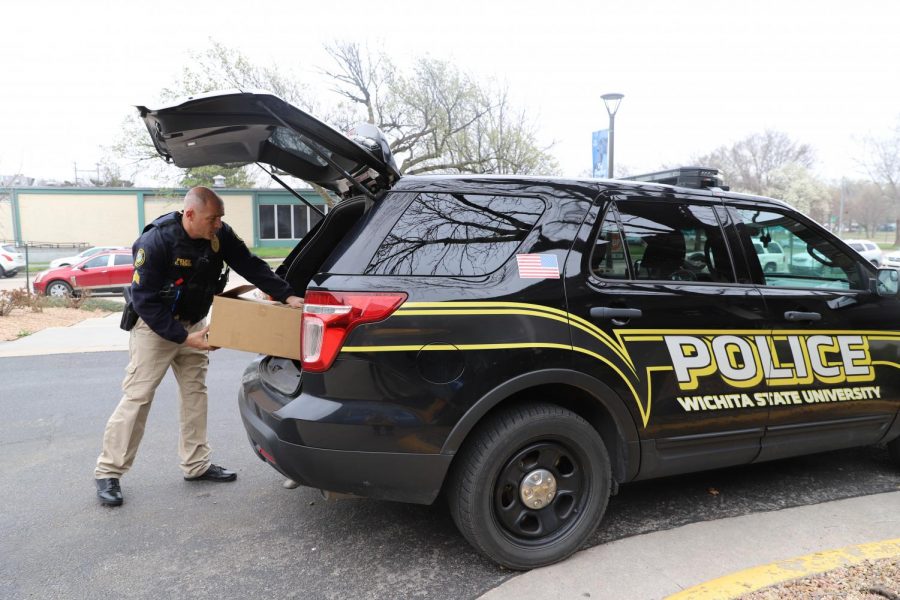 Wichita State Police Sergeant Christopher Tenet unloads a box of personal protective equipment from his police vehicle. Tenet made a delivery to the University of Kansas Medical Center on March 27, 2020.

Golden said the initiative began after a series of donation requests were sent to the university.

“Initially, I received a request from one of the CEOs of one of the hospitals asking if Wichita State and WSUTech had anything they could help provide to the hospitals [as] they prepare for . . . a larger number of cases,” Golden said. “At the same time, local emergency responders reached out similarly with a request.”

Golden said there is a high number of first responders who remain without protection. He said he hopes this initiative can help make a difference.

“We have first responders that don’t have . . . any personal protection, including specifically the N-95 respirators,” Golden said. “Being a former first responder myself, I wanted to make sure those who are . . . protecting us are protecting themselves.”

Golden said the initiative has had a great community response so far.

“Both people and companies [have responded],” Golden said. “Textron made a very large donation of protective equipment.”

Textron made a donation of 1,500 N-95 masks on Wednesday, according to the county government.

Golden said that not only has WSU received donations from companies located on campus, but they have also seen individual community members step up to help.

“From major companies like that  . . . to individuals who have actually taken the time to hand sew masks for first responders and health care providers,” Golden said. “It’s the full gambit of people in the community that have really come prepared and responded to the call for action.

Due to the volume of donations, WSU was able to deliver a N-95 respirator for every Wichita police officer and every firefighter in the city on Wednesday.

“That gives me great comfort knowing that every one of our first responders will have a personal protective respirator,” Golden said.

They have also provided thousands of gloves and additional respirators to Via Christi and Wesley hospitals.

“We’ve really helped to stock up their supplies,” Golden said.

Golden served as a first responder for seven years. He said that makes this initiative personal for him.

“It’s very close to my heart,” Golden said. “I know what the day-to-day stress is, let alone having this additional responsibility laid on them.”

As the community finds its way through challenging times, Golden assured Wichitans that they’re in good hands.

“God bless them for the service they provide,” Golden said. “We are here to help them.”

Even though the university has already received a large number of donations, Golden said that there will always be a need for more.

“We’re going to ask the community to continue to donate [because] we expect the need to continue and it’s going to be important for ongoing supplies . . . to come in,” Golden said.

For more information on how to contribute to this cause, check out wichita.edu/ppe.