OPINION: The things they set down

"The things we put down are cruelly cumbersome," writes columnist Audrey Korte in the wake of Covid-19 disruptions. 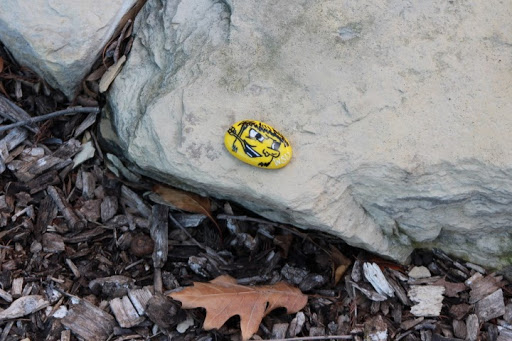 One of the only faces found on campus this week.

“They carried all they could bear, and then some, including a silent awe for the terrible power of the things they carried.”

― Tim O’Brien, The Things They Carried

It’s easy to reject emotional reactions with life interrupted. I find myself avoiding certain topics of conversation, trying to be brave, not expressing the sadness and disappointment that I feel. After all, what have I got to complain about? I have decent health. A job. A roof over my head.

What’s a canceled trip or dream deferred in the face of a pandemic?

As someone who remained home-bound for many, many years due to chronic illness, and had life cruelly interrupted by tragedy a couple of times, let me just share that rituals are crucial to our communities and commonality. They include everything from the graduation ceremony to the birthday party, from religious holidays to family dinner routines.

We have rituals for birth and rituals for death and just about everything in between. And one thing most of us have definitely not taken the time for amongst the chaos is the ritual of grieving for the life we’ve just lost — not literally, but figuratively.

It’s not just okay to grieve — I encourage it. Grieve the life you’ve lost even when it doesn’t equate to an actual loss of life. That means don’t just mourn the dead but the loss of the old way of living.

Don’t be ashamed of feeling all the feelings. It doesn’t make you petty or selfish to cry because something you wanted badly is not going to take place or something you’ve dreamed about won’t happen when, where, and how it is “supposed to.”

I thought somehow I could fly into New York with the World Trade Center still smoking, be gone a week or two, and then return to a life of regularly scheduled programming. I thought I could wrap things up on the coast and come back to the safety of the heartland.

When I arrived at Ground Zero I was clueless. I thought the missing would show up bruised and battered, but not dead — not all of them. I didn’t think they’d eventually become “presumed dead” on some list made by the listmakers of such morbidity.

I thought we’d have funerals with pomp and circumstance and incense and organs. I never imagined sometimes vague and unsettling prayer services, months after the fact that seemed afraid to call on any one deity for fear of offending someone.

I never imagined the families left behind would fight for death certificates or life insurance money for months on end.

I believed America would find justice in Afghanistan and Iraq instead of pain, heartache, and unrequited loss of life.

I thought America was united.

But mostly, I thought I could continue with the life I’d had on September 10 when I returned to Kansas City from the East Coast in the middle of October 2001.

I gave it my everything to muscle through. I tried and it nearly killed me. I equated strength with the ability to get back to the grindstone — chin up, with dry eyes, a fake smile, just oozing courage and capability.

The COVID-19 pandemic is not similar to my post 9/11 world. Many have compared the two. I get why, but still, for me, the analogy feels like a pair of mismatched shoes. It doesn’t look right, doesn’t feel right, and generally bums me out.

As I’ve gotten older and the time since that fateful day has turned from days into months into years, I realize I learned many things about myself from 9/11, and maybe even more about “us” — about our collective memory and emotional attachments from times of tragedy and chaos. I also came to redefine strength and tenacity.

Refusing to be defined by tragedy does not look anything like refusing to accept reality. Please write that down. It’s the lesson that could have gotten me to admit that nightmares sometimes happened in daylight, and that I felt too many sad, painful, powerless moments in rapid succession to expect myself to be emotionally on top of shit.

Don’t buy into the self-defeating lie that your feelings aren’t warranted or are somehow wrong, that your struggles aren’t heavy burdens because they don’t look like your neighbors’ or that you’re not traumatized because the degrees of separation between you and the dead are too many.

This is the stuff we hear in our minds that immediately influences how well we cope, connect, and what we are comfortable with communicating to others. It’s also what determines which of our feelings get locked up with shame.

What are the questions you have not asked because you assume people who are smart or informed already know the answers?

What is the thing you’ve put down that hurts the most because it makes you feel small to admit it?

Shout it from the rooftops.

What are you clinging to that needs to be let go of?

Your disappointment is valid. If you’re sad over the lack of public ceremony around a rite of passage, tell your friends. They will understand. They also might find comfort in the normalcy of your comment. In this way, perhaps we can support each other as we unlink arms, disembrace, and walk away from each other.

So the things you put down now, you should acknowledge. Feel the tears, pout if you must, be angry. Get it over with. Have a ritual of release to signal to mind and body that this has happened, this must end, this is now over, and I let it go.

It’s now a part of my ritual to put things down, in an instant if that’s what it takes to prevent the spread of disease. Even the things I’ve carried for years. But that doesn’t mean I let them go silently. I do it through ritual and I do it with friends and family. I hope the same for you.